Average age of Quebec COVID-19 patients has dropped by 10 to 15 years, doctors say 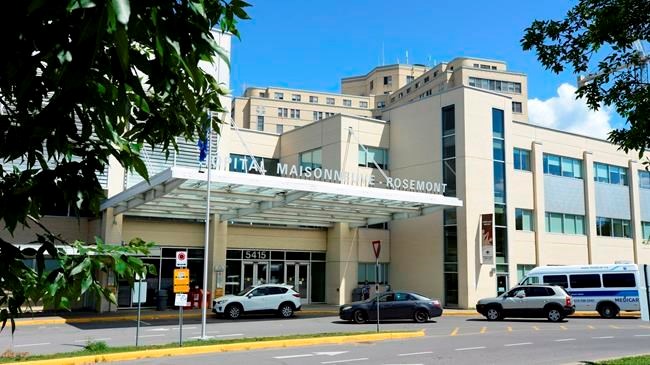 MONTREAL — Over the past two to three weeks, Dr. Francois Marquis, head of intensive care at Montreal's Maisonneuve-Rosemont hospital, says he started noticing the average age of COVID-19 patients dropping.

People arriving at the hospital are on average, about 10 to 15 years younger than earlier patients in need of medical care after contracting COVID-19, he said in an interview Wednesday.

"We are starting to see what was very unlikely during the first wave: 30 or 40-year-olds without any previous medical history, people in good health," Marquis said.

"Many of them deteriorate quite quickly and have to be admitted to the ICU," she said.

Dr. Gaston De Serres, an epidemiologist with Quebec's public health institute, said the proportion of Quebecers over 80 in hospital with COVID-19 has been declining since mid-March — largely due to vaccination.

He said it's not just the proportion of hospital patients who are younger that's increasing, the overall number of younger patients is rising as well. De Serres said there were 40 people between 50 and 59 years old who were hospitalized the week of March 7. During the week of March 28, there were 54.

But hospitalizations are still not rising significantly among people under 30. "It's younger," he said of the average age of patients. "It's not young."

Ten people between 20 and 29 years old were hospitalized with COVID-19 in Quebec the week of March 28, up from five two weeks earlier, De Serres said.

"If you have more cases, you will clearly have more hospitalizations, but the proportion of all hospitalized cases will remain small because these younger age groups are very low risk of being hospitalized."

De Serres said he thinks more younger people are getting sick because the coronavirus variants of concern are more transmissible and they lead to more severe illness more frequently.

Mike Benigeri, director of the data bureau at the Institut national d'excellence en sante et services sociaux, a Quebec government health-care research institute, said that over the past two weeks, there has been a 40 per cent increase in the number of people aged 40 to 69 who have been infected with COVID-19.

In a report released Thursday, the institute said the number of new cases among people aged 18 to 30 rose by 47 per cent the week of March 27, when compared to the week before.

Marquis said older people and those with other medical conditions may notice a COVID-19 infection sooner. People who are healthier may not seek medical attention until they're very ill, he added.

"They will push the limits of endurance up to the point when they say, 'OK, it's enough, I really need to go to the hospital,'" he said.

Despite the odds of dying being low among younger people, that doesn't mean the consequences among the small group who do get severely ill are any smaller, he said.

Quebec Premier Francois Legault has repeatedly said that with vaccination protecting older people, the province will be able to tolerate more COVID-19 cases.

Dr. Quoc Nguyen, a gerontologist at the Universite de Montreal hospital centre, said while that may be true when it comes to deaths, it may not be the case for ICU capacity.

"When we look at one case in December versus one case in March, it seems that for a single case we have more intensive care than we used to before, but we don't necessarily have more hospitalization," he said.

It's ICU capacity that worries Marquis. His ICU is supposed to have 24 beds, but because staff members have left the health-care system — particularly nurses — it now has a capacity of 14: seven beds dedicated to COVID-19 patients and seven for everyone else.

"I am really afraid that in two weeks we're going to be in the same place as Ontario is right now and I don't think that we can deal with that many patients," he said.

Ontario Premier Doug Ford has imposed a four-week stay-at-home order after a third wave of COVID-19 started to overwhelm the health system.

This report by The Canadian Press was first published April 8, 2021.