7th case of COVID-19 diagnosed in B.C., bringing number of cases to 11 in Canada 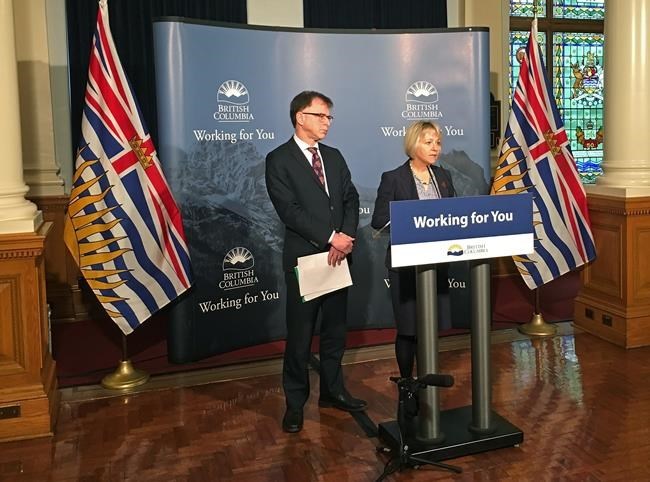 VICTORIA — A seventh case of the novel coronavirus has been diagnosed in British Columbia, bringing to 11 the number of cases in Canada.

Provincial health officer Dr. Bonnie Henry said Monday a man in his 40s who is a close contact of the sixth case in the province has been diagnosed with COVID-19.

The man had symptoms before the woman's diagnosis, Henry said.

"There were a few additional close contacts that he had that have now been identified over the weekend and are also in isolation and being monitored carefully," she added.

The sixth case involves a woman in her 30s whose diagnosis was confirmed last week after she returned from Iran.

Cases of COVID-19 diagnosed at the BC Centre for Disease Control no longer require confirmation at the National Microbiology Laboratory in Winnipeg because the province's testing has been validated, Henry said.

She said health officials are hoping the new coronavirus will be similar to influenza and other respiratory viruses that circulate during winter and typically wane in early spring.

"But we are not out of the woods yet, and really that buys us time," she said.

If the virus can't be contained and eradicated from human transmission, Henry said it might arise next influenza season, by which time anti-viral medications and a vaccine could be developed.

Screening people at airports is challenging and limited, so countries like Iran, which has an increasing number of COVID-19 cases, should not allow people with symptoms to fly elsewhere, Henry said.

"They've (Iran) been putting screening measures in place, I understand, and South Korea has actively been doing that," she said.

"We do ask everybody that's coming here to ensure that they monitor carefully for symptoms. We will be stepping up our advice on that."

Anyone with symptoms should limit their contact with others and contact their primary care provider, local public health office or call the 811 healthline to reduce the possibility of passing the virus on to others, Henry said.

Many more Canadians who were outside of the country have tested positive for the new coronavirus.

They include 129 people who were aboard the Diamond Princess cruise ship, which was docked in Yokohama, Japan, since early February, being repatriated to Cornwall, Ont., on Friday. They will be is isolation for 14 days.

Of the seven cases, the first has fully recovered, Henry said. The other six patients remain in self-isolation at home and under the care of public health teams.

A fourth case of the virus was confirmed in Ontario on Sunday, with the previous three cases cleared of the illness.