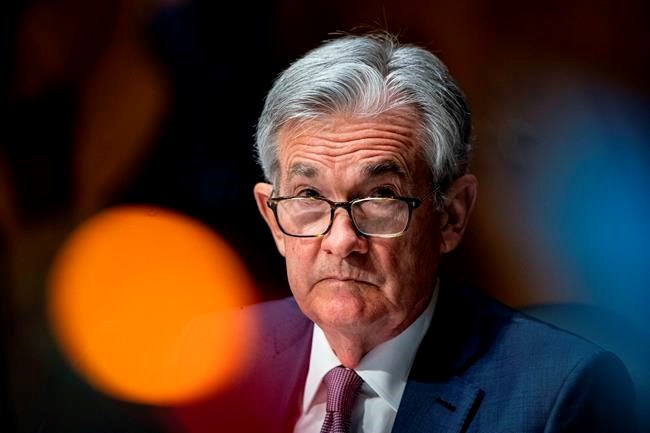 “The economic recovery remains uneven and far from complete, and the path ahead is highly uncertain,” Powell said in testimony to the Senate Banking Committee.

Powell's comments are in contrast to the increasing optimism among many analysts that the economy will grow rapidly later this year. That outlook has also raised concerns, though, about a potential surge in inflation and has fueled a sharp increase in longer-term interest rates this year.

Most economists say they think the Fed’s continued low rates, further government financial aid and progress in combating the viral pandemic could create a mini-economic boom as soon as this summer. Powell acknowledged the potential for a healthier economy. But he stressed the personal hardships caused by the pandemic, especially for unemployed Americans.

“As with overall economic activity, the pace of improvement in the market has slowed,” Powell said. “Although there has been much progress in the market since the spring, millions of Americans remain out of work.”

Powell's focus on the economy's challenges reflects his reluctance to send any signal that the Fed is considering pulling back on its efforts to boost economic growth and hiring. The Fed cut its benchmark short-term interest rate to nearly zero last March in response to the pandemic recession. It is also purchasing $120 billion a month in bonds in an effort to hold down longer-term rates.

Powell reiterated that those purchases will continue until “substantial progress” has been made toward the Fed's goals of low unemployment and stable inflation at about 2% annually.

Powell also downplayed concerns about rising longer-term interest rates and potentially higher inflation, which some analysts worry will result from a burst of spending and growth if the pandemic is brought under control later this year.

The Fed chair also refused to endorse or condemn President Joe Biden's $1.9 trillion economic rescue package, which is beginning to make its way through Congress. When asked by Sen. John Kennedy, R-La., if he would “be cool” with Congress approving or voting down Biden's proposal, Powell said, “By either being cool or uncool, I would have to be expressing an opinion. ... which I'm not doing."

The divide in Congress in regard to the state of the economy was clearly on display, a key part of the debate over the stimulus. Sen. Sherrod Brown, D-Ohio, chairman of the committee, spoke of Americans facing eviction, struggling small businesses, and state and local governments that need financial assistance.

Sen. Pat Toomey, R-Pa., however, noted that 18 states have unemployment rates below 5% and argued that incomes have recovered to pre-pandemic levels.

“We are well past the point where our economy is collapsing,” Toomey said. “In fact our economy is growing rapidly ... There's also real danger that we have overheating ... that can lead to inflation.”

Powell has previously endorsed government spending in general to offset the impact of the recession. Fed chairs typically avoid commenting on specific legislation.

The Fed chair also acknowledged that prices could rise later this year if Americans engage in a burst of spending as the coronavirus comes under control.

But Powell emphasized that he doesn't expect sustained price increases. Inflation has been held down for decades by greater international competition, growing online commerce, and other trends that take time to change, he said.

In response to a question from Sen. Kyrsten Sinema, D-Ariz., Powell said, "We do expect that inflation will move up. But we don’t expect the effects on inflation will be particularly large or persistent.”

Powell's remarks to the Banking Committee are coming on the first of two days of semiannual testimony to Congress that is required by law. On Wednesday, he will testify to the House Financial Services Committee.

His testimony comes as the economy is showing gradual improvement in key areas, with manufacturing and retail sales rebounding despite a stagnant job market. Still, the steady rise in interest rates has unsettled the stock market. On Monday, the tech-heavy Nasdaq index tumbled a steep 2.5% as the yield on the 10-year Treasury note surged to nearly 1.37%. At the start of the year, the 10-year yield was below 1%.

Powell attributed that increase to optimism about a potential acceleration in growth.

“In a way it's a statement of confidence on the part of markets that we will have a robust recovery," Powell said.

In response to a question from Toomey, Powell acknowledged that “there is certainly a link” between the Fed's low-interest rate policies and rapid price increases for stocks, homes, and some commodities. But he also attributed much of the price gains that have occurred to rising optimism.

For now, interest rates remain, by historical standards, exceedingly low. As recently as the fall of 2018, for example, the 10-year yield briefly topped 3%. But for the past year, the economy and the markets have drawn strength from near-record-low borrowing rates.

Many analysts are bullish about the prospects for this year. On Monday, Michelle Meyer, an economist at Bank of America, raised her forecast for growth this year to 6.5%. That would be the strongest calendar year economy growth since 1984.

Still, the job market remains essentially stalled, with employers adding an average of just 30,000 jobs a month in the past three months. The economy is about 10 million jobs short of its pre-pandemic level.

Powell was also asked about the prospects of the Fed creating a digital currency, a move that is gaining steam among other central banks. Powell said the Fed is “looking carefully at whether to issue a digital dollar.”

Fed governor Lael Brainard said last year that the central bank has conducted “in-house experiments” on a digital currency, as a complement to cash. Providing a digital dollar would ensure “the public has access to a range of payments options,” she said.

CRTC sides with Videotron in dispute with Bell over access to poles, other structures
Apr 16, 2021 3:34 PM