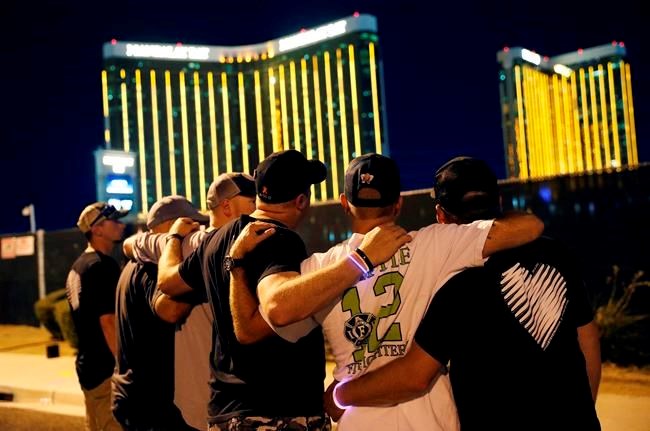 LAS VEGAS — A court on Wednesday approved a settlement $800 million from casino company MGM Resorts International and its insurers to more than 4,400 relatives and victims of the Las Vegas Strip shooting that was the deadliest in recent U.S. history.

The action makes final a deal settling dozens of lawsuits on the eve of the third anniversary of the mass shooting that killed 58 people and injured more than 850 at an open-air concert near the Mandalay Bay resort.

“By the grace of God, myself and my family are going to be OK,” said Stephanie Fraser, a plaintiff in the lawsuit from La Palma, California. “I needed to be able to protect our kids."

Authorities said more than 22,000 people were attending an outdoor music festival when a gunman firing military-style weapons from windows on the 32nd floor of the Mandalay Bay rained rapid-fire bullets into the crowd.

Fraser’s husband of 13 years, Brian Fraser, a at a mortgage company, died after being shot in the chest as they danced while country music singer Jason Aldean performed.

“Brian is missed beyond words by all of us — all of our family and all of our friends," Stephanie Fraser told The Associated Press. The couple had four children and stepchildren. She and her attorney, Dan Robinson, declined to say how much they'll receive in the settlement.

“With this coming to an end, it brings closure and allows us to put pieces back together," Fraser said. "Brian would want that for us.”

MGM Resorts, owner of the hotel and the concert venue, acknowledged no liability. It will pay $49 million, while its insurance companies will pay $751 million.

“We are grateful that the decision brings families, victims and the community closer to closure,” the company said in a statement. It noted the anniversary of the Oct. 1, 2017, event, calling it “a time of great sadness and reflection.”

Memorial ceremonies are scheduled Thursday at several venues in Las Vegas, including a reading of the names of the slain beginning at 10:05 p.m. — the time the first shots rang out.

Attorney Robert Eglet, the plaintiffs’ lawyer who spent a year arranging the settlement with clients, legal firms and attorneys in at least 10 states, said the amounts to be disbursed will be determined by two retired judges and he’s hopeful that payments will begin going out by the end of the year.

“There’ve been no objections and we expect no appeals,” Eglet told The Associated Press. “We’ll send out notices of the order. After 30 days the $800 million will be deposited.”

The case will be dismissed at that time, he added.

“Our firm and the other leadership firms hope it helps victims and their families find some sense of closure and healing," said Mark Robinson Jr., a California attorney representing Fraser and more than one-third of the shooting victims.

Eglet previously said that everyone involved “recognized there are no winners in long, drawn-out litigation with multiple trials where people and the community are reliving the event every time we try a case.”

A line-by-line list of victims, identified by their initials only, runs for more than 170 pages of a 225-page civil complaint filed Sept. 9 seeking compensation and punitive damages from MGM Resorts. It accused the casino company of negligence, wrongful death and liability in the 2017 shooting.

Plaintiffs came from nearly every state in the U.S., at least eight Canadian provinces, the United Kingdom, Iran and Ireland.

In various lawsuits, victims and families accused MGM Resorts of failing to protect people at the concert venue or stop the shooter from amassing an arsenal of weapons and ammunition over several days before he opened fire.

Millions of dollars could go to the most severely and permanently injured, Eglet said, depending on factors including age, number of dependents, type of injuries, previous and future medical treatment, and ability to work.

A minimum $5,000 would go to each person who filed a claim for unseen injuries and did not seek medical attention or therapy.

Court filings in the case don’t mention the gunman, Stephen Paddock, who killed himself before police closed in.

Las Vegas police and the FBI determined the 64-year-old retired accountant and high-stakes poker player meticulously planned the attack and acted alone. They theorized he may have sought notoriety, but said they never determined a clear motive for the attack.

The Latest: Expert: France has "lost control" of the virus
Oct 26, 2020 3:21 AM
Harry Styles investing in new music venue in Manchester
Oct 26, 2020 12:49 AM
Comments
We welcome your feedback and encourage you to share your thoughts. We ask that you be respectful of others and their points of view, refrain from personal attacks and stay on topic. To learn about our commenting policies and how we moderate, please read our Community Guidelines.