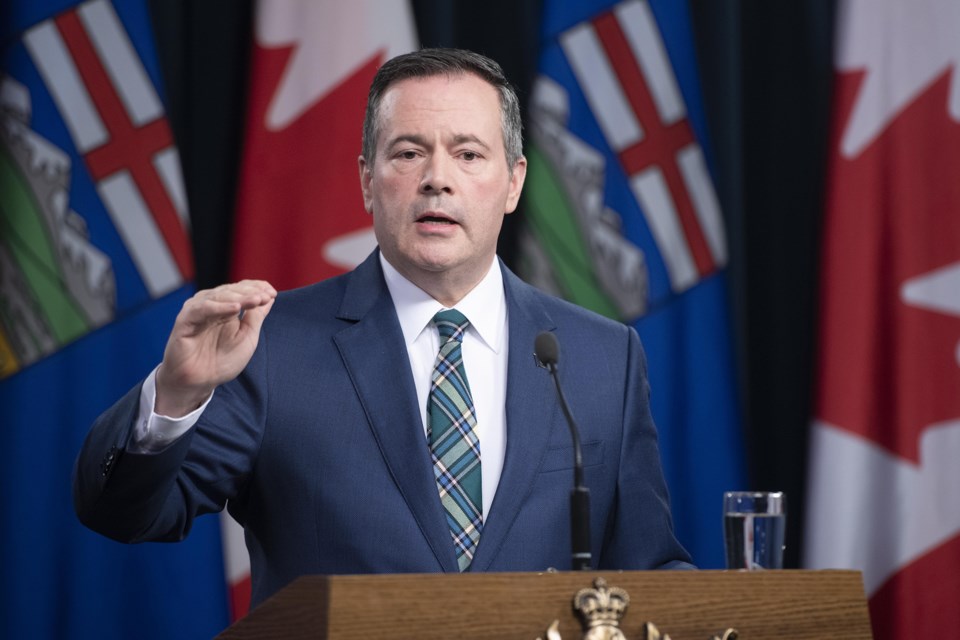 Premier Jason Kenney initially said no rules were broken when he gathered on a patio with some cabinet ministers for a meeting. Photo courtesy of Alberta government

Published on June  2, the photo shows Nixon, Kenney, Health Minister Tyler Shandro and others sitting at an outdoor table in Edmonton.

Under Stage 1 re-opening regulations regarding distancing among members of different households it is mandatory to keep social distance of a minimum of two metres. Several of those in attendance do not appear to be keeping the two meter distance requirement.

When the photo became public, Premier Kenney said no COVID rules were broken. However, during a June 7 press conference, Kenney apologized for breaking social distancing rules during the dinner.

"It's clear that at some points in that evening we were not all distanced from one another by two metres and I truly regret that. I take full responsibility for this. We have to set a higher example, a higher threshold for conduct, and so I want sincerely to apologize to my colleagues and to Albertans for letting you down," said Kenney.

"We took precautions to do it in a distanced way, trying to observe the rules. In fact, we set up four continuous tables and spaced chairs out. We've actually gone up and measured the chairs since this became a controversy and apparently four of us were two metres or more between each other but two of those chairs were less than two metres distance and there's no doubt that over the course of the meeting, people came within the two metre distance."

MLA Nixon has not responded to repeated requests for an interview on the matter.

Last last week Nixon did provide The Albertan with the following statement: “The premier, with a few ministers, including me, held a working dinner last night.  Attendance was kept under 10.  Costs were not incurred by taxpayers. You'll note the gathering was outdoors. I hope all Albertans are getting an opportunity to enjoy visits outside, while still observing public health measures.”

At the time, Nixon did not reply to a follow-up inquiry as to whether those in attendance were following social distancing rules.

Following the dinner, a number of UCP MLAs called on the premier to apologize for violating COVID restrictions.

Bruce Beattie is the reeve of Mountain View County.

“It’s just disappointing and concerning,” said Beattie. “If we are going to fine people for not wearing masks and there pictures of the servers (at the meeting) not wearing masks, what kind of message does that send to people that we may even prosecute for not following the rules?

“I think someone said we expected a higher standard from our leaders and we’ve heard Mr. Kenney chastise Albertans for not following the rules, for not respecting the direction and significance of the pandemic.

“To see a group of cabinet ministers, including the Minister of Health, you’ve got to ask yourself, what were they thinking?”

Sundre mayor Terry Leslie, whose municipality is in Nixon’s riding, declined to comment on the situation.

Rhonda Hunter is the mayor of Didsbury.

“Elected officials are held to higher standards, but we are human and we all make mistakes and poor decisions at times,” said Hunter.

“I can’t be critical; I’m not judging the photo. I wasn’t there. I chose the stance that we as elected officials aren’t perfect and there might be times that we let our guards down in what we believe are private situations. It doesn’t make it right. It is just being human.”

Asked if she believes the premier and cabinet ministers made a mistake by not social distancing, she said, “I think it’s up to them to make that decision as a group, if they were right or wrong.”

NDP Opposition Leader Rachel Notley said: “(Albertans) do not need their leaders to break the rules, and do it on the top of the castle. That is not how you lead during the crisis, and I think all Albertans are getting very tired of these repeated failures of leadership.”