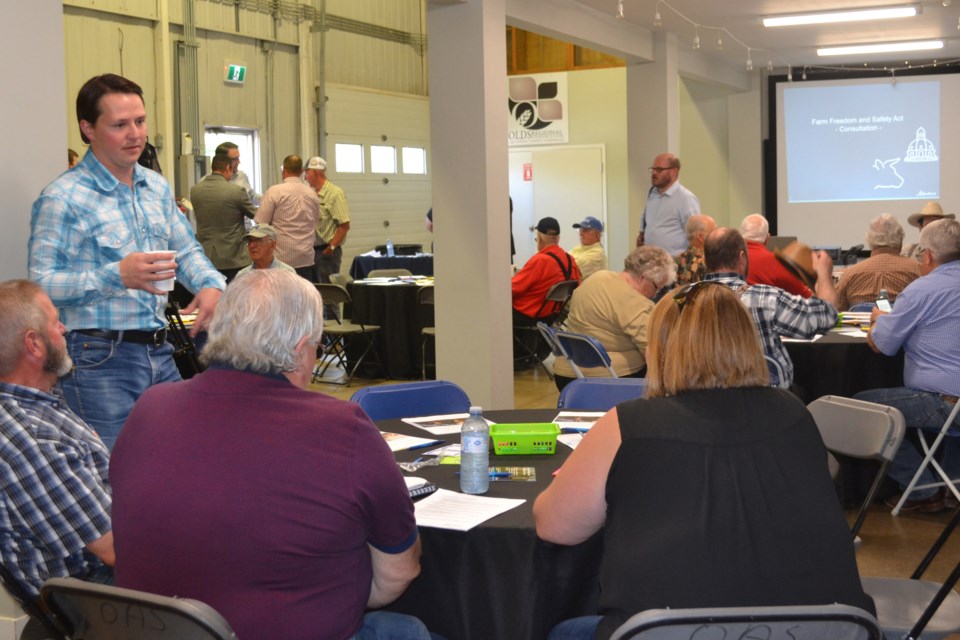 Innisfail-Sylvan Lake MLA Devin Dreeshen, who is also the agriculture minister, chats with some of the participants at the Olds consultation tour stop for the Farm Freedom and Safety Act in August. File photo/MVP Staff

The province’s new proposed Farm Freedom and Safety Act, designed to replaced the NDP’s controversial Enhancement of Protection of Farm and Ranch Workers (Bill 6), is receiving mixed reviews following its introduction in the legislature last week.

Agriculture and Forestry Minister Devin Dreeshen, who is the MLA for Innisfail-Sylvan Lake, says the new legislation strikes a good balance between workers’ rights and the needs of farmers and ranchers.

“We promised Albertans we would consult first and legislate second, and that’s exactly what we did. We’ve taken this feedback and built common-sense farm workplace legislation that works for people, not against them,” said Dreeshen.

“The government is committed to restoring balance, fairness and common sense to the regulation of Alberta’s agriculture sector by repealing and replacing the previous government’s failed Bill 6 legislation."

While Bill 6 brought non-family agricultural workers under occupational health and safety rules and regulations, the new legislation will allow employers to choose between market insurance or WCB.

It also exempts small farms (with five or fewer employees) from employment standards rules and the requirement to have workplace insurance, farms and ranches will be exempt from the Occupational Health and Safety Act, and the Labour Relations Code will no longer apply to farms and ranch operations.

“Farmers have told us that there’s no real place for a union on a farm. It hasn’t been an issue,” said Dreeshen.

The legislation was introduced following 25 public engagement sessions and an online survey.

Lorne Dach is the official Opposition critic for agriculture and forestry. He calls the new legislation “a full and brazen step backwards” for farmer workers.

“Now we are basically out of step with the rest of the country,” Dach said in an interview. “Farm workers on small farms don’t have any potential protection from workplace injuries. It will leave a lot of farm workers in those smaller operations with no protection or limited private protection, which doesn’t go to the same extent as WCB coverage did for them.

“It also leaves the farm operations exposed to lawsuits which could actually put them under because there won’t be any recourse other than the courts for many of these workers. It is potentially threatening to the operation of the farmer.”

The legislation is an attack on workers’ rights, he said.

“They (UCP government) certainly have no respect for working people,” he said. “They made a promise in this election campaign to get rid of Bill 6. In fact what they did was create a lot of misinformation about what Bill 6 would do.

“Initially we had a rocky start in communications with Bill 6, but eventually we came to a place with the regulations where everybody was on board and satisfied. It was working and people were taking advantage of the coverage.”

He predicts the legislation may lead to lawsuits.

“I don’t know if many farm workers are going to be able to go to the courts to challenge this on their own,” he said. “The government is probably hoping that nobody will see fit to challenge it, but it very likely contravenes our Constitution. That may be something that ends up happening.

The Alberta Wheat and Barley commission has come out in support of the legislation.

“In terms of the overall shape of the industry, consultation has been a critical feature of the new government for Bill 6 and the Farm Freedom and Safety Act,” said Tom Steve, Alberta Wheat and Barley Commission/general manager of Alberta Barley.

The Alberta Federation of Labour (AFL) calls the legislation bad news for the province’s farm, ranch and agriculture workers.

The legislation “will make farm and ranch workplaces less safe. Removing mandatory Workers' Compensation coverage sets a horrible precedent. Albertans will no longer be able to track farm and ranch injury rates for the province and farms with private insurance will be at risk for lawsuits,” said AFL president Gil McGowan.

“Ultimately, the debate on this heartless and vengeful piece of legislation should be focused, not on employers or owner-operators, but on the workers themselves. Paid agricultural workers are a group of workers in Alberta who were, until very recently, denied their basic rights.

“Now, only months after having won them after years of struggle, they are having those rights stripped away again by an anti-worker government.”

The new legislation is a concern because it may lead to less reporting of workplace incidents on farms, NDP labour critic Christina Gray reportedly said.