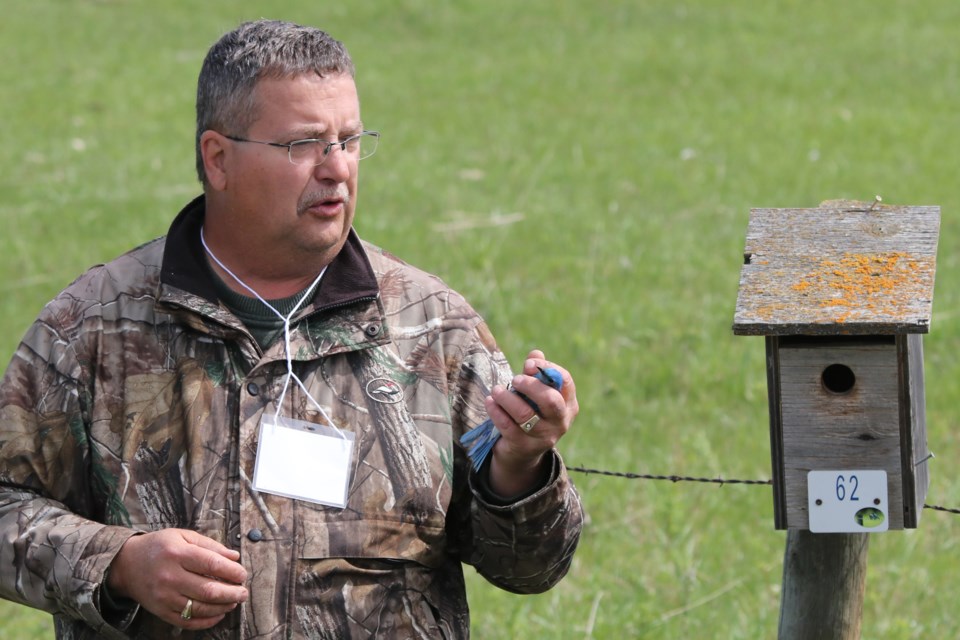 OLDS — The number of mountain bluebirds in a portion of Mountain View County fell by 20 to 25 per cent from 2017 and 2018 according to Dick Stauffer, who bands and counts bluebirds, along with Ron Reist.

The duo look after and monitor more than 730 bluebird nesting boxes, primarily south and east of Olds.

“The majority of the decline occurred west of Highway 2,” Stauffer wrote in notes provided to the Mountain View Albertan.

They figure the reason for the mortality was cool and wet weather this past spring and summer.

“They really took a crap kicking this year,” he said in an interview. “That rainy, cold weather is really tough on the birds.”

But he’s hopeful the population will rebound because over the past 15 years or so that he’s been doing the bird count, he’s seen bluebird numbers in the county fall, then rise again.

“That’s nothing you can control, so you can’t do anything about it; you just go with the flow. Hopefully next year is better,” he said.

Stauffer said bluebirds are dependent on insects and grubs as their primary food source, and the population of those creatures fluctuates, depending on weather.

“Cold weather means no insects. No insects, no grubs,” he said.

Stauffer said the die-off seemed particularly bad among birds that were about two weeks old.

“The really young ones seemed to survive this cold weather,” he said.

Reist said bluebirds tend to have two hatches of nestlings per year.

He said in 2019, he saw about 150 first hatchings, on par with previous years. However, he only found five or six second nests, down from the usual 40 to 50.

“So that represents a huge decline in the number of offspring made, like 100 birds just in my territory,” he said.

“I suspect they just felt they just either thought it was just too hard to raise the first batch, there wasn’t enough food available for a second hatch,” he said.

The fall-off in numbers is sad, Reist said.

“They are a beautiful bird. I’ve seen some incredible species around the world, but there’s nothing prettier than a mountain bluebird.”

Stauffer and Reist begin banding the birds in the spring until about the end of July when they’ve all generally flown the nest.

In the report, Stauffer noted that 62 adult bluebirds and 788 nestlings were banded.

Seventy-four previously banded bluebirds were recaptured, including one near Lacombe and two southwest of Calgary near Millarville.

“It is a bit unusual that the birds move that far,” he wrote.

There’s another problem, besides the lack of food.

Reist said over the last several decades, bluebirds have been negatively affected by the introduction of the English house sparrow and European starling, which he said are very aggressive and basically took over the bluebirds’ natural habitat.

As a result, since the 1960s or so, people began building nesting boxes for bluebirds.

“Probably 95 per cent of baby bluebirds are born in boxes made by man, so they’re totally dependent on us now. So we have no choice but to provide them with environments to live in,” Reist said.

“We’ve pretty much made them addicted to our boxes, just for survival.”

However, Reist said, fewer and fewer people are building and maintaining those boxes, at least in Mountain View County, so he’s worried about what that means for the future.

“So 20 years from now, who’s going to be maintaining these boxes and putting them up,” he asked, adding efforts are underway to recruit younger people to look after the boxes.