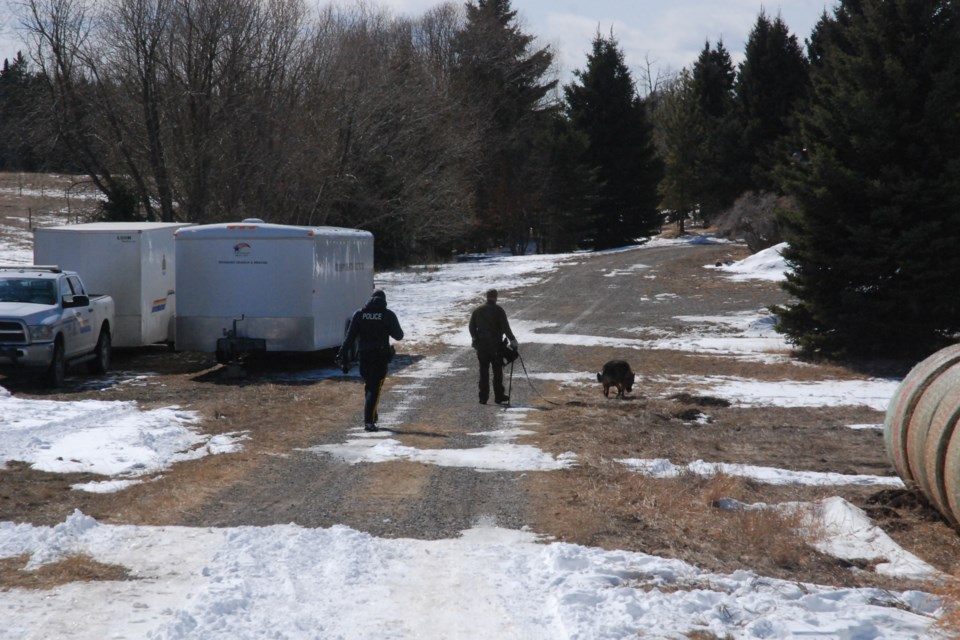 Members of the Didsbury RCMP department, with assistance from Police Dog Services out of Red Deer, an officer from the Sundre detachment, and many volunteers with Sundre, Mountain View as well as Rocky Mountain House Search and Rescue, were searching for a missing 73-year-old Calgary male after he was reported missing on a property on the south side of Twp. Rd. 320 immediately east of Rge. Rd. 45. Harvey Pyra was found deceased on Wednesday, March 31. Simon Ducatel/MVP Staff

MOUNTAIN VIEW COUNTY — The circumstances behind the death of a Calgary male discovered on his Bergen-area property last week following a roughly two-day search after he was reported missing by family, are not suspicious, said police.

“He was out there to check his property,” said Cpl. Tammy Keibel, RCMP media relations officer.

“His plan was to be checking the fences along the property,” the corporal said on Thursday, April 1 during a phone interview with The Albertan.

The last reported contact with Harvey Pyra, 73, was on Saturday, March 27. His family subsequently came out to check his rural property — located directly east of Bergen on the south side of Twp. Rd. 320 and immediately west of Rge. Rd. 45 — on Monday, March 29, but were unable to find him, Keibel said.

“It would have been at that point that the family would have notified police,” she said.

Later that evening, she said the RCMP, assisted by Police Dog Services, began to conduct a search of the property. That operation continued the next day with assistance from an RCMP helicopter and Sundre as well as Mountain View Search and Rescue, with the team of volunteers from Rocky Mountain House initially on standby.

That effort continued throughout the day until about 7:30 p.m., and was resumed the following morning on Wednesday, March 31, when his body was found at about noon, she said.

“His quad was located on the property, and my understanding is he wasn’t located too far away from the quad that he was utilizing,” she said, adding the off-highway vehicle was discovered near a fence line.

“He was located by search and rescue volunteers.”

The time of death was not immediately known, and an autopsy was yet to be performed, she said.

Although authorities were unable to speak exactly to what might have happened, Keibel said neither foul play nor alcohol were suspected factors in the investigation.

“The death is not suspicious in nature,” she said, adding autopsies are nevertheless conducted in such situations to try and determine not only how but also when the deceased perished.

“There won’t be any further updates,” said Keibel.

Although there had over the weekend Pyra went missing been a late season snowstorm that brought strong winds and cold conditions, that was not believed to have played a role in his death, said Roger Tetreault, Sundre Search and Rescue’s senior search manager, who assisted with the operation’s planning and logistics.

“From what we gathered today, we don’t believe that the severe weather event that we had over the weekend had anything to do with his demise,” Tetreault said on the evening of March 31.

“But it absolutely, 100 per cent had an effect on why it took as long as it did to locate him,” he said, referring to the difficulty presented by deep snowdrifts.

Neighbours and nearby residents were asked to avoid the area but also to keep an eye out for any wandering male that might have looked out of place, while search efforts were largely focused exclusively on the property, he said.

“We didn’t really have any concrete reason to believe he would have left that property,” he said.

About 10 volunteers from Rocky Mountain House ended up participating in the final search effort, and Tetreault was among the team that found Pyra.

“I was right there when everything unfolded…in this type of search, for the amount of time we’d been looking for this fellow, it’s probably not a secret that we knew that it wasn’t going to end well,” he said.

“We never want to give up hope,” he added.

There are factors such as medical history, age and environmental conditions that might play a role in leading an individual to exhibit different behaviour or otherwise impair their cognitive faculties, including hypothermia, he said, adding all possibilities have to be considered and narrowed down through the process of elimination. Of course the investigation to determine why Pyra strayed from his quad and subsequently succumbed falls under police jurisdiction, he said.

Speaking candidly, Tetreault said this was not his first experience with a difficult outcome.

“Unfortunately, I don’t want to say I’ve become hardened to it.”

However, although hope is reserved until the last possible moment, seasoned search and rescue members do learn to steel themselves in these situations, he said.

“You never forget these things,” he said, adding senior members must be aware of newer volunteers who might process the experience differently and potentially be upset, and be prepared to provide moral support.

If there’s reason to believe a mission will become a recovery effort, there will be a forthright discussion with volunteers who might want to opt out at that point, he said.

“Victims services are on site, they always are,” he added.

Shannon Pyra, one of Harvey's daughters, responded by email and expressed “overwhelming gratitude” not only for her father's life but also to those who were involved in the search effort and offered the family assistance.

“While he was missing, our imaginations — fuelled by uncertainty of his fate — took us to unspeakable places,” she wrote.

“During that time, we found ourselves moved by, and appreciative beyond words for, the selfless efforts of the RCMP officers, searchers, rescuers, neighbours, and our community who helped us find some mercy with an answer.”

She described her father as someone who had always been, and remained, an avid outdoorsman who adored spending time in Bergen with family.

“He was a man of many talents — a problem solver who could always find a way to fix things. He had a great sense of humour and loved to tell a story. He had a lifelong and mutual love of animals, and spent his last moments with horses, his dog, and an eagle. When his time ran out, he was outside with his boots on.”

Harvey leaves behind the love of his life, Eileen Pyra, his wife of 45 years, as well as three daughters, two sons-in-law, three grandchildren, two brothers, and an extensive network of family relations too numerous to encapsulate in a brief list. He was predeceased by his parents, Clifford Pyra and Josephine Pyra, and by his in-laws, Richard Percifield and Doris Percifield.

“He would want to include that he is also predeceased by his horse, Shylo,” wrote Shannon, who on behalf of the family also extended a deep appreciation for the outpouring of support from the community.

“Thank you for the opportunity to recognize this incredible human being together, and for helping us meet the challenge of this sudden and profound void in our hearts.”