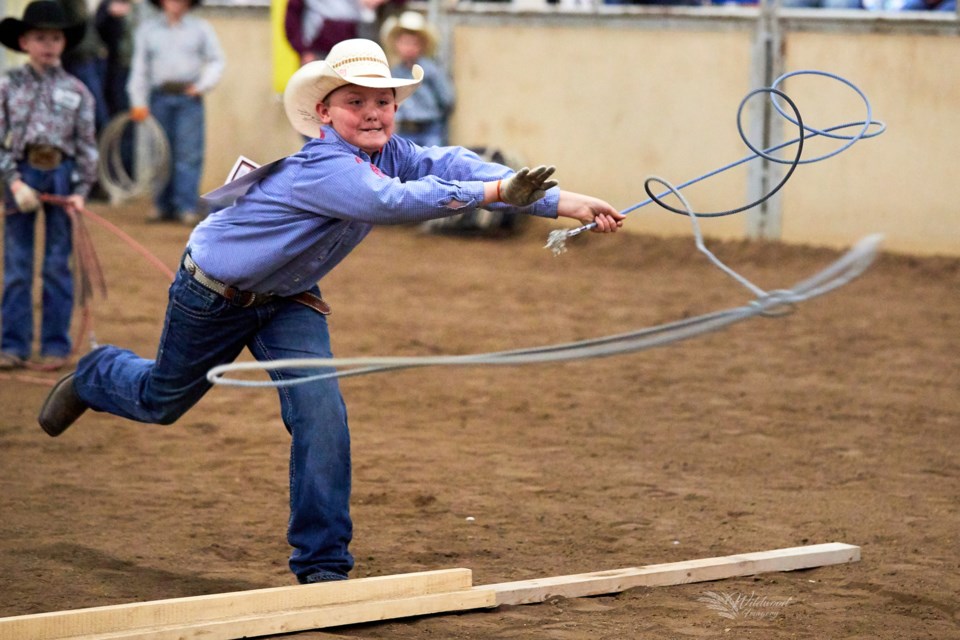 OLDS — While the rest of us are stuck in the dead of winter, 10-year-old rural resident Rance Coates will be competing in the finals of the World Championship of Dummy Roping for kids in Las Vegas on Dec. 14.

Rance qualified for that competition after winning a dummy roping competition in the 7-9 age group during the Rising Stars portion of the Canadian Finals Rodeo in Red Deer on Nov. 1.

On that same day at almost the same time, he won the Canadian Dummy Roping championship in the 7-9 age group during the Future Champions Challenge in Ponoka.

He beat out three age groups during a rope-off, winning a saddle for his efforts.

Even though he’s 10, Rance competed in the 7-9 category because organizers group competitors according to their age as of Jan. 1.

But when he goes to Las Vegas, he’ll have to compete in the 10-12 category.

Rance’s mom, Ashley, says Nov. 1 was a frantic day, because both competitions were not only held on the same day, but also within an hour of each other; and the CFR competition was a half-hour late getting started.

“We started at the CFR. They were supposed to start at 12 but didn’t get started till 12:30. And then Rance roped and we practically ran out the door and drove to Ponoka and he walked in the line fourth up and then roped, so there was no practice in between,” Ashley says.

“But we’re crazy like that and hit both – in one day.”

The Coates family lives on a farm about 15 minutes east of Olds.

“He’s learned his roping from his dad,” Ashley says. “Rance has had a rope in his hands since he was six months old. So he’s roped all this time. He did take a break for a little bit and then he started back at it and here we are.”

“My husband (Dustin Coates) rodeos all the time, so the rodeo’s a big part of our scene.”

Rance is pretty proud of his accomplishment, but he admits it was a challenge.

“The first one in Red Deer wasn’t as tough, but the second one in Ponoka was a little bit tougher,” he says, noting that when competing in Ponoka, he had to stand further away from the dummy. He started out standing 12 feet away. In the finals, he had to stand 16 feet away.

When asked for his secret to success, Rance has a simple explanation.

Rance figures he practises roping a couple of hours a day – while still getting homework done too.

He says he likes the pressure of competing, plus, “you can win lots of cool things.”

He plans to continue entering roping competitions for the rest of his life.

He’s already had a chance to rope live cattle during a couple of competitions in Olds, although he’s not so happy with his performance.

“I didn’t do very good,” he says in a low voice. “I took four steers, I missed three and then I caught one.”

But his mom points out one event was his first time competing in jackpot while actually riding a horse.

As he gets ready for the finals in Las Vegas, Rance is adopting the same strategy that got him this far.

“I just have to really practise,” he says. “You have to spend the hours, even if it’s snowing bad outside.”

OKCS hosts senior boys' basketball tournament Feb. 28 - 29
Feb 27, 2020 6:15 AM
Comments
We welcome your feedback and encourage you to share your thoughts on this story. We ask that you be respectful of others and their points of view, refrain from personal attacks and stay on topic. To learn about our commenting policies and how we moderate, please read our Community Guidelines.