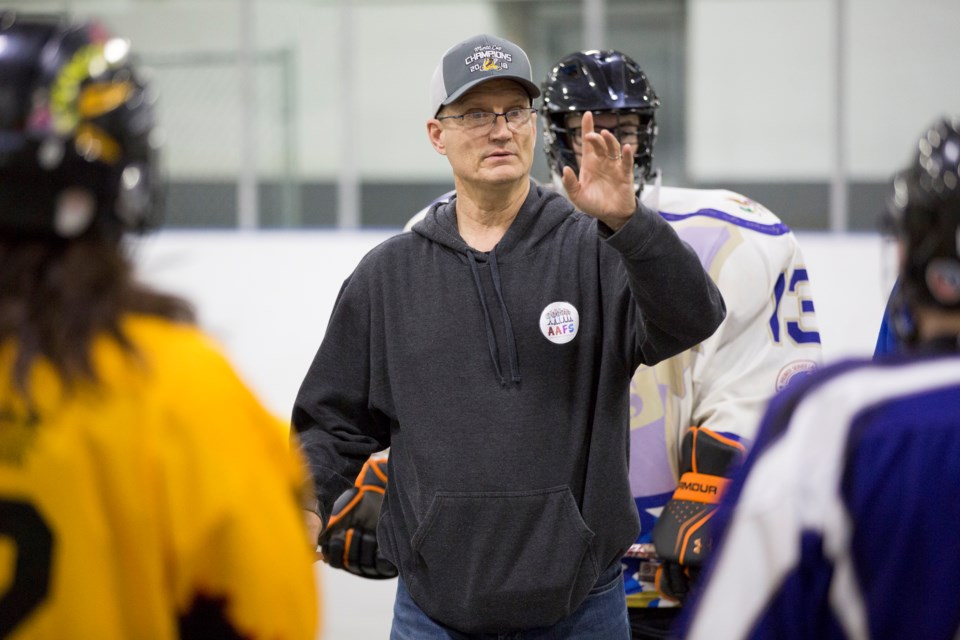 Scott Godfrey, one of several associate coaches of the Stingers, speaks with players during a practice last year. He says the team was all set to hit the ground running after a 1-16 season. File photo/MVP Staff

OLDS — The COVID-19 pandemic basically forced cancellation of the 2020 junior lacrosse season, but spokesmen for both the tier I Mavericks and tier II Stingers say they and their players are coping as best they can.

There’s a faint hope that the teams can play a shortened season, or maybe some exhibition games but Mavericks assistant coach Gary Gaudette is not counting on it.

He said as far as he knows, arenas in the area are not expected to open until at least the end of June or July.

The anticipated loss of this season is frustrating, Gaudette said during an interview.

“As far as the Mavericks go, we were really optimistic with that team,” he said.

“There were a lot of new players that we picked up and players that wanted to play with us. It was looking really favourable for us this season to do really well.”

Gaudette was also looking forward to the new season because he and Andy Sweetman were tired of their roles as organizers and had agreed to help out behind the bench again as assistant coaches.

“We missed it and we just wanted to give Colby (Bannister, the Mavericks head coach) a hand working the bench. We were ready to jump back in.”

Gaudette is disappointed by the loss of the season but philosophical about it.

The story’s the same with the Stingers.

Scott Godfrey, one of several associate coaches of the Stingers, says the team was all set to hit the ground running after a 1-16 season last year.

They rented indoor floor time in September and had National Lacrosse League players do clinics with players.

Team management undertook extensive recruiting  -- including a few guys from England, Ireland and Belgium who were ready to come to the area until the pandemic broke out, at which time they had to stay in their home countries.

“We’ve kept in touch with them. They’re committed to next year,” Godfrey said.

The Stingers relocated to Didsbury where they’ll now be called the Mountain View Stingers. They’ll have their own dressing room and lots of opportunity to train.

Godfrey said that will help them in their effort to recruit players from across Mountain View County as well as Kneehill County.

Amanda Kinnenberg is the team’s manager. Godfrey is joined by Laine Foshaug, the Stingers’ head coach last year, as well as Brad Bouchard and Logan Niemeyer.

Godfrey is confident the Stingers will have a better season – whenever it happens.

He notes in their last game last season, they lost in overtime to a team that had previously beaten them by one goal.

“After Game 1 I did see that we had some work to do, but I saw a core of young men who had integrity and they were not bigger than the game,” Godfrey said.

“When you have people who want to play good lacrosse, there’s always hope. And at 1-16, the only direction is up.”

Godfrey said the team will also have a new look. A business has come forward to sponsor team uniforms and equipment.

Godfrey admitted it’s frustrating not to see the 2020 season underway when everyone worked so hard to improve in the off-season, but he maintains perspective.

“I have a daughter, she’ll be one of our lead statisticians. She’s 27. She has spina bifida and hydrocephalus,” Godfrey said.

“She’s had 50 operations over the last three years. And while I was coaching, she had two, 10-hour surgeries to have her spine fused. So COVID-19 is a very serious thing, but it can always be worse.

“No one asked for this and no one likes it, but we’ll play again.”