Sundre Minor Hockey Association goaltenders recently had an opportunity to learn from a Viking -- one who dons a goalie stick and pads rather than a shield and sword.
Jan 9, 2019 9:00 AM By: Simon Ducatel 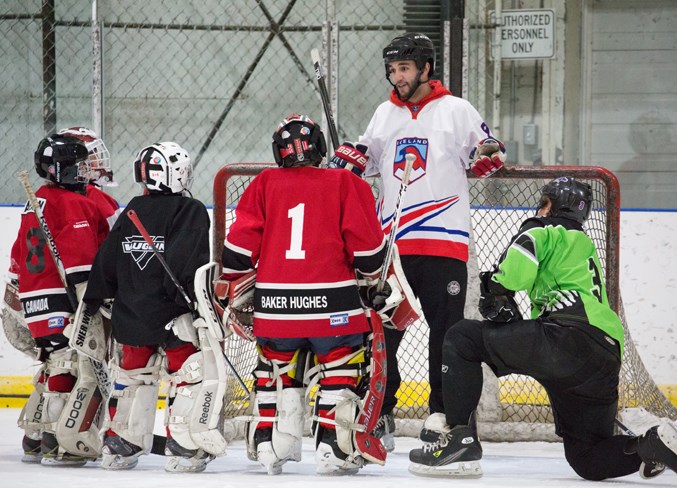 Adam Beukeboom works with a group of novice, atom and peewee goaltenders during a goalie clinic at the Sundre Arena on Dec. 20.

Sundre Minor Hockey Association goaltenders recently had an opportunity to learn from a Viking -- one who dons a goalie stick and pads rather than a shield and sword.

Adam Beukeboom, who was born in Sundre in 1994 and graduated from the local high school in 2012, was home for the holidays from Iceland, where he is the leading goaltender for the Skautafelag Akureyrar sport club’s team called the Vikingar, or Vikings.

As part of his first professional contract with that Akureyri-based sports club, the 24-year-old is also the Icelandic team’s coach for all junior goalies.

Beukeboom was at the Sundre Arena on Thursday, Dec. 20 for his annual goalie clinic with the local hockey association and worked alongside novice, atom and peewee players for an hour before offering some tricks of the trade to the bantams and midgets for another hour.

“We’ve been doing this for years. Every time I come back from hockey I try and set this up,” he said.

When asked what inspired him to offer his time and expertise, Beukeboom said during an interview before the clinic that he essentially sought to pay it forward.

“When I was growing up, there were always guys that came. They skated with us, and they helped me out,” he said.

With some prior experience in the Western Hockey League, Beukeboom said he has in the past played some games south of the border, but that as far as playing for a league goes, this is his first out-of-country contract to play for a team.

His hockey roots run deep in Sundre, where he was from the beginning involved with the local association, which he called “one of the best” and attributes it with helping him get where he is now.

Originally starting off as a skater, Beukeboom eventually decided to try on some goalie pads and never looked back.

“There was a couple of kids I looked up to,” he said, naming Shannon Humphrey and Dale Aldridge.

From a professional level, Beukeboom said he is a big fan of Carey Price, an NHL goalie who plays for the Montreal Canadiens.

“I try and model my game a little bit after him. He’s a little bigger than me so I got to do some things differently,” he said, adding he attempts to mirror Price’s style as much as possible.

But Beukeboom also has hockey in his blood. Jeff Beukeboom — a cousin of Adam’s father and Sundre resident Mike Beukeboom — was a defenceman for the Edmonton Oilers as well as the New York Rangers, and won the Stanley Cup four times back in the 1980s and 1990s. Another cousin of Mike’s is Joe Nieuwendyk, whose lengthy career included playing for the Calgary Flames, the Dallas Stars, the New Jersey Devils, and the Toronto Maple Leafs.

Before ending up in Iceland, Beukeboom said he had been studying business at Brock University in St. Catherines, Ont., but did not find that appealing.

Although his post-secondary studies are temporarily on hiatus, Beukeboom said he is considering picking up some courses to start a path towards a degree in kinesiology.

“You can only play hockey for so long, but you can always go back to school,” he said.

Not satisfied with a lack of opportunities to play hockey during his time at Brock University, Beukeboom expanded his search parameters and decided to further investigate options in Europe.

Through connections made along the way, he said a few conversations and expressions of interest eventually turned up the chance to play in Iceland, although he came close to signing on with a French division. However, the latter was not as certain, he said.

“It was late enough in the year, I just figured Iceland would be a cool opportunity. When am I going to get to go to Iceland?” he said.

“They offered the contract and I took it,” he said, adding there was not much hesitation involved and that everything so far has “been awesome.”

Late in September, the Vikings played in the Continental Cup, a club tournament with champions from various leagues from all over Europe that play in different divisions, he said.

His team started at the lowest division and defied the odds during the first round played in Bulgaria, he said.

“We ended up winning — we weren’t expected to win a single game, let alone the whole series,” he said.

“Then we went to Latvia the following month to play the second round.”

Although the Vikings lost two games and didn’t go past the second round, they nevertheless managed to win one match, he said.

“Which again, we weren’t expected to win anything,” he said, adding there were some strong teams, including one whose players had played more than 1,000 games combined.

Beukeboom heads back to Iceland on Jan. 7 and his sights for the time being remain firmly fixed on his hockey career and pursuing new opportunities as they arise for as long as he can.

“As long as I can play, if people want me and they’re willing to pay for me to play for them, why not — I’m getting a really cool experience, getting to see all of Europe,” he said, adding the best part is the opportunity to travel.

“You meet lots of people.”

Life in Iceland is somewhat similar to what Beukeboom was accustomed to in Canada but there are differences, he said, citing a different culture as well as the much shorter days of being far north. Also, the Icelandic language can be tricky to pronounce and understand, “but everybody speaks English.”

The landscape is an amazing sight to see, he said, describing Iceland as “a toned-down version of B.C., but with less trees.”

Despite the country’s name that often conjures mental images of a barren frozen wasteland, Iceland “is pretty much the opposite. It’s mountainous — there are lava fields everywhere.”

While Beukeboom remains passionate about hockey and still enjoys the adrenalin rush of competing, he said “it’s more about the (life) experience” and making connections as well as building what he hopes becomes lifelong bonds.

“All of the experiences and the friends you make along the way, at this point in my life, that’s more important,” he said.

“You’re going to remember that stuff over the big game you won. It’s the people that you won the big game with.”