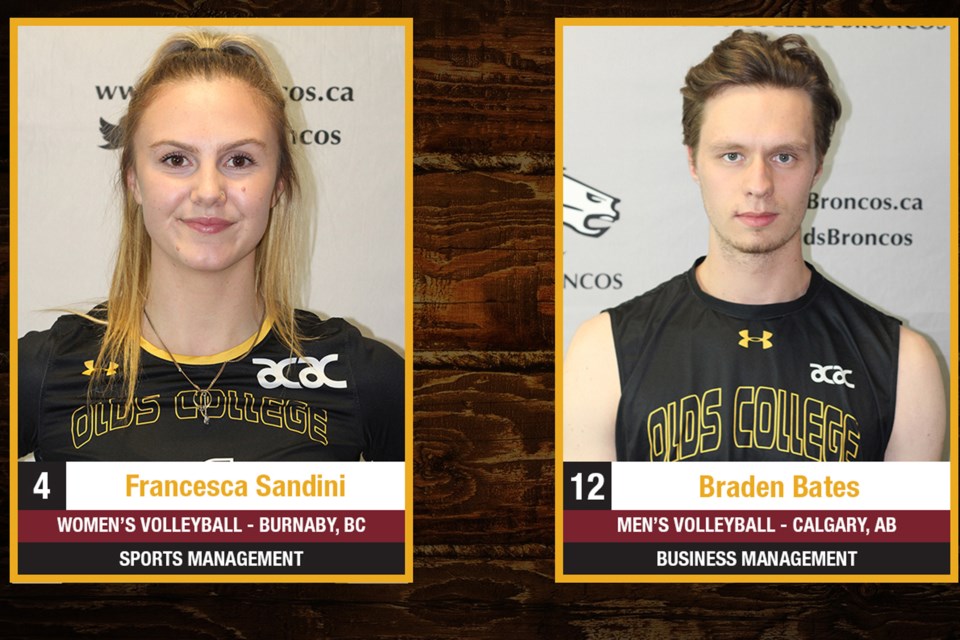 Olds College volleyball players Braden Bates and Francesca Sandini are the Olds College A&W men's and women's athletes of the week for Oct. 21-27.

OLDS - Braden Bates and Francesca Sandini are the Olds College A&W men's and women's athletes of the week for Oct. 21-27.

Bates, a middle attacker on the men’s volleyball team helped the Broncos open their season vs. SAIT.

The team lost both nights, but the third-year business student led the middles on both nights with a solid performance. The Calgary product accumulated five digs, eight kills and three stuff blocks over the weekend.

Bates stepped up as a leader of the team and motivated his teammates to keep fighting against a very good SAIT team.

Sandini, a rookie libero on the women’s volleyball team, started off the season strong, showing great composure and leadership on the Broncos' defence.

The sports management student-athlete from Burnaby, B.C. played steadily on Friday, passing a 2.1 average and contributing 13 digs to a five-set victory at SAIT. She followed that up Saturday during the Broncos' home opener, passing a 2.25 and adding 20 digs.

Sandini’s positive attitude and hard work will be key contributors to the continuing development of the volleyball program.

2020 Alberta Senior Men’s Golf Championship gets underway in Olds today
Aug 5, 2020 6:00 AM
Comments
We welcome your feedback and encourage you to share your thoughts. We ask that you be respectful of others and their points of view, refrain from personal attacks and stay on topic. To learn about our commenting policies and how we moderate, please read our Community Guidelines.