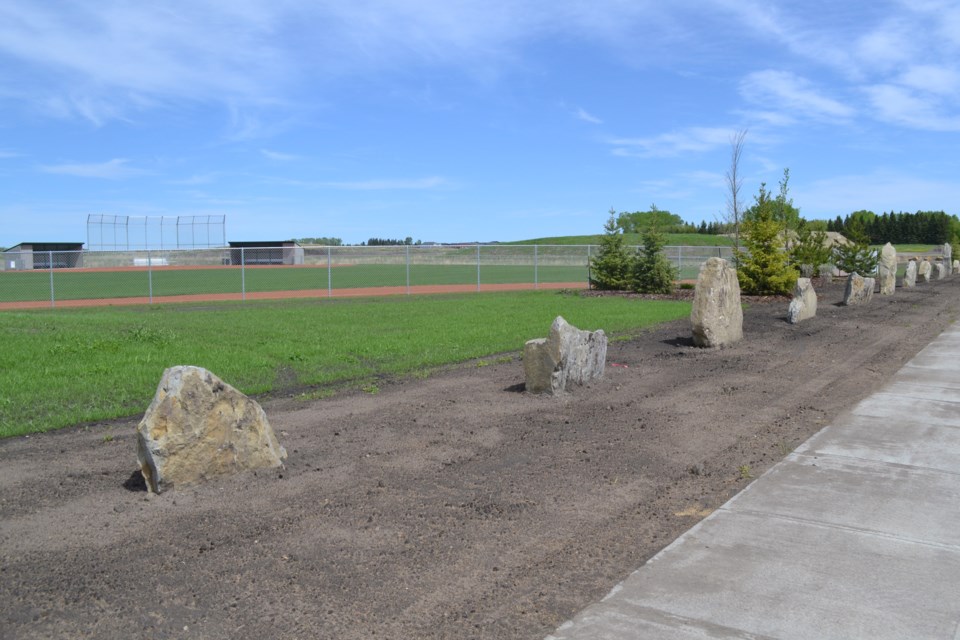 A look at the rocks in front of one of the ball diamonds in the new Rotary Athletic Park. Doug Collie/MVP Staff

OLDS — The town now has formal ownership of the new Rotary Athletic Park.

Director of operations Scott Chant made that announcement during the town’s June 1 policies and priorities committee meeting.

The park, located along 70th Avenue, just north of the Cornerstone shopping development, contains soccer pitches, baseball and softball diamonds, concession facilities, as well as 10 horseshoe pitches to replace the ones eliminated from Centennial Park.

Construction on the project began in 2018. At that time, its estimated cost was approximately $3.6 million.

Chant said the town took ownership on May 30.

“There’s just the completion construction certificates that need to be signed off,” said Chant. “But basically this week that park is now not under the contractor’s restraints anymore. It’s under the Town of Olds.”

“That’s a bit of good news for us,” Chant added. “It’s been a long time coming, but the majority of the work is done.”

He said the contractor may do some maintenance for the remainder of the year, but now the town can do anything it deems necessary.

Chant said one job that remains to be done is to create pitching mounds on the facility’s ball diamonds.

He said the local minor baseball association has agreed to undertake that work.

“That way, they can get it done in the correct dimensions, height, size, material that they like,” he said.

Josh Zanolli of Olds Minor Baseball said later the tentative plan is to begin that work this weekend, if the weather is good.

“I had the opportunity to tour around that park last week and I think it looks absolutely amazing,” she said.

She made special mention of several big rocks that have been installed in front of one of the ball diamonds.

Harper said not only do they serve a practical purpose – deterring vehicles from driving onto the park lawn, but “they also add a lovely feature.”

Chant said all of those rocks came from the site of the park.

“The rocks were dug up as we did the construction, so we’re just utilizing them for exactly that, not to have vehicles shortcut,” he said.

“And I’m very appreciative of the number of trees and shrubs that have been planted out there,” Harper said.