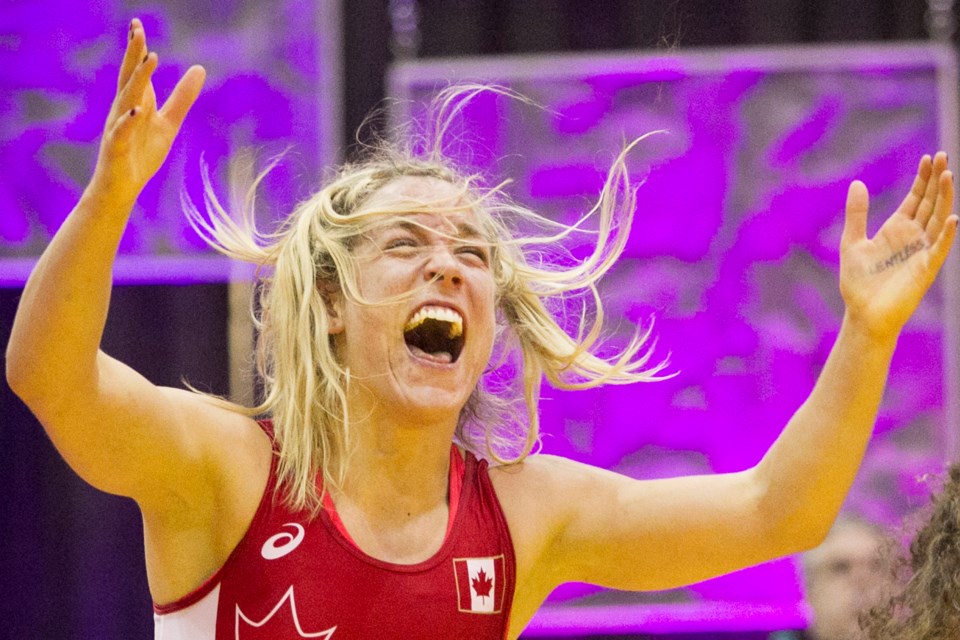 Danielle Lappage celebrates after defeating Braxton Stone during their second match to secure a spot on the Canadian Olympic team in Rio for the 2016 Olympics. Lappage qualified for the 2020 Olympics to be held this summer. File photo/MVP Staff

OLDS — Town council has voted to provide hometown wrestler Danielle Lappage with $5,000 to help her compete during the 2021 Olympics in Tokyo this summer.

Council made that decision during its June 28 meeting after receiving a request for financial help from Lappage. The money will come from the town’s Summer Games Legacy Fund.

“It is a rare thing for a small community to send one of their own to the Olympics," a memo to council from administrative staff said.

Lappage will be competing in the 68-kilogram (kg) class. The Summer Olympics run from July 23-Aug. 8 Wrestling matches run from Aug. 1-7.

This will be Lappage’s second appearance at the summer Olympics. She qualified for the 2016 Olympics in Rio, but suffered a ruptured hamstring just before her first match and was unable to compete.

Coun. Mary Anne Overwater made the motion to provide the money for Lappage.

Overwater noted that in 2016, the Mayfair Cinema provided a hook-up to Lappage’s match. She and a friend, an aunt of Lappage’s, were in the theatre ready to see the match when Lappage came out in obvious pain and sadness and had to withdraw from the match before it even began.

“We were sitting there watching and we were thinking, ‘She just doesn’t look good, there’s something wrong,’” Overwater recalled.

“All of us sitting there, we were all just like, we’re all waiting for this big fight to happen – this big wrestle – and all of a sudden she’s crying, everyone in the cinema’s crying and then the next thing you know she’s carried off.

“So hopefully this year – I think she’s worked very, very hard to get herself in shape and I hope the cinema will do it again. But certainly all the best to Danielle."

Coun. Mitch Thomson said, "It should be noted that this individual has spent a significant amount of time speaking to other groups and students and things in the community. She is an outstanding ambassador and one I think we can definitely be very proud of.”

Coun. Heather Ryan said the decision is a "tremendous” use of the Legacy funds.

Lappage wrote: “I was born and raised in Olds, AB. Olds is my hometown and my parents still live there. The town has always been so supportive of me and my dreams.

“I am so thankful to have grown up in Olds and it will forever have a special place in my heart. I have always been so proud to represent Olds in all of my athletic endeavours and I look forward to continuing to do so this summer at the Olympic Games.”

Lappage indicated she’s back, and ready to compete.

“I am so proud of everything I have overcome to get where I am,” she wrote. “I am currently wrestling well and I am healthy, optimistic and excited for this upcoming Olympic Games.”

"To be able to achieve my Olympic goal I have been faced with great financial stresses, particularly over the last 18 months. I anticipate that this stress will continue until after the Olympic Games, as I am putting all of my energy and effort into preparing to compete in August.

“I plan to do everything I an to make sure I am the best prepared I can at the Olympics. I will leave no stone unturned in my preparation.”