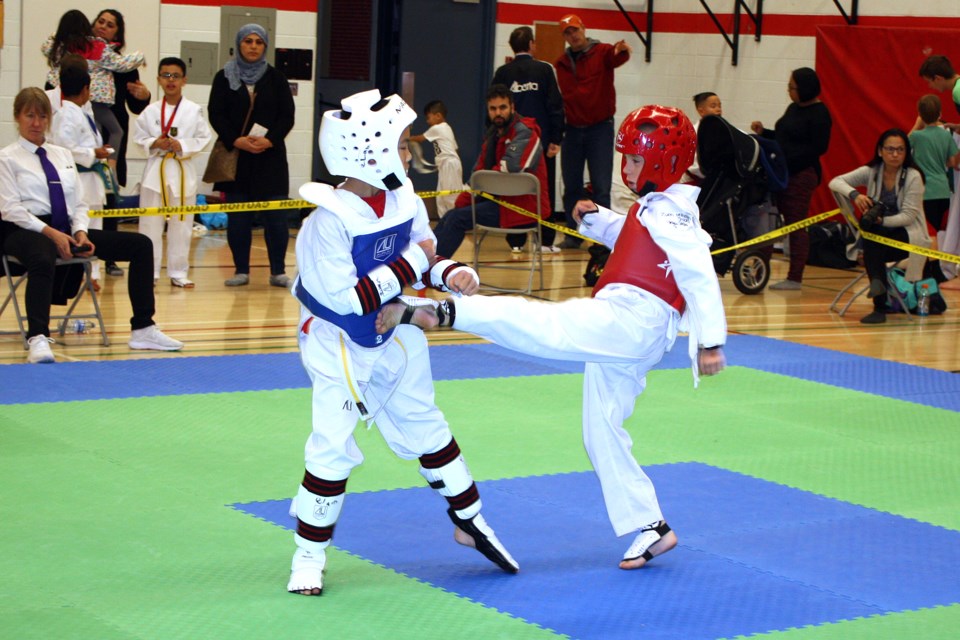 Numbers for the annual Mountainview Taekwondo Club's championship were down slightly from last year's 25th annual tournament, but there were still more than 100 contenders who came out to compete. Submitted photo

SUNDRE — Martial artists of just about all ages recently tested their mettle during the Mountainview Taekwondo Club’s 26th annual championships.

Although numbers were down slightly from last year’s roughly 120, Master Terri Miller said there were nevertheless a little more than 100 contestants on Saturday, Nov. 2 at the Sundre High School, which again hosted the tournament in its gymnasium.

Contenders, she added, came out from clubs in Whitecourt, Edmonton, Calgary, Red Deer and Rocky Mountain House. One of the largest contingencies was from Jung’s Black Belt club in Calgary. For the Sundre students that started with the local club in September, this was their first tournament experience, she said.

“We had some really, really good fights,” she said, adding some of the local club’s younger members did very well in their bouts against higher level belts.

Among the adults, there were also some strong performances, she said, citing as an example the story of a mom and new martial artist whose children have already been training for some time.

“She finally joined and fell in love with the sport,” said Miller, adding the novice student is already excited for the next opportunity to compete in another tournament.

As a white belt, she faced some stiff competition against higher belts, and although she didn’t win, she had a great time, said Miller.

“The spirit to get back into the ring after taking a bit of a beating is a big thing for us too,” she said.

Visit us online at www.MountainViewTODAY.ca for the full results.

Next up for the club before the holiday break is the annual testing day in early December followed by some award presentations, with classes set to resume in January, she said.

Training sessions are held on Monday and Thursday evenings from 6 to 8 p.m. at the Sundre Community Centre.

“We’re always looking for new members. This is a good parent and child activity. If you want to do something with your kids, this is a perfect opportunity to do some exercise with them,” she said.

“Taekwondo is an Olympic recognized sport that also teaches students discipline and perseverance. It is a family oriented sport that is great for all ages and fitness.”

Anyone who wants more information can send questions to mvtkd@telus.net.

Town takes ownership of new park
Jun 11, 2020 5:00 PM
Comments
We welcome your feedback and encourage you to share your thoughts. We ask that you be respectful of others and their points of view, refrain from personal attacks and stay on topic. To learn about our commenting policies and how we moderate, please read our Community Guidelines.