Sr. men's curling playdowns over for another year

Local curlers are back on the ice now that the Southern Alberta Senior Men’s Playdowns are over for another year. The Olds Curling Club hosted the event, which featured 12 rinks, Jan. 18-21.
Jan 28, 2019 8:08 PM By: Doug Collie 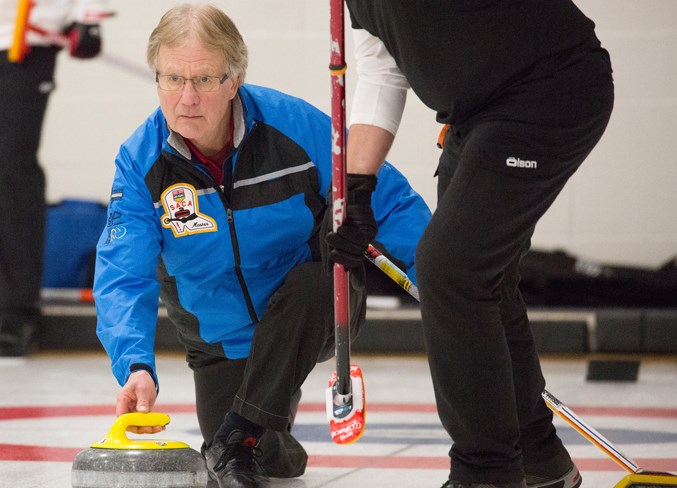 Ed Lukowich throws a rock during the Senior Men&#8217;s Curling Playdowns, hosted by the Olds Curling Club Jan. 18-21. Lukawich has a storied career, having won the Brier and World Curling championships. But his team didn&#8217;t make it this year.

Local curlers are back on the ice now that the Southern Alberta Senior Men’s Playdowns are over for another year.

Two teams from Calgary, the Terry Meek and Scott Egger rinks; and the Fred Armstrong rink from Red Deer and Lethbridge qualified for the senior men's provincials, which take place Feb. 13-17 in Spruce Grove.

Henry Czarnota, who helped organize the playdowns said they went well, although they suffered a bit from a distraction -- the Continental Cup.

"People came and went. The Continental Cup was on TV, so there's a lot of curling fans who sit at home and watch curling on TV. That often happens," he said. "But, I mean, you know, the curlers certainly stuck around and supported the club."

One of the biggest names competing was Eddie Lukawich, a former world and Brier champion.

"I thought that the Lukawich team didn't play up to their capability," Czarnota said, noting that although Lukawich skipped the game he threw third rocks.

The Olds Curling Club has hosted seniors' or master's playdowns for the last few years.

It's not yet known if it will host a major competition like that again in 2020.

Czarnota says there are pros and cons to doing that.

It raises the profile of the club and its facility. However, "unfortunately you're giving up club curling when you're sponsoring those kinds of things," Czarnota says.

"So it's a trade-off. You get to watch some better curling and support provincial competition but you're also giving up club curling and we have 30 senior teams in town, and they'd prefer to curl. You can't blame them."