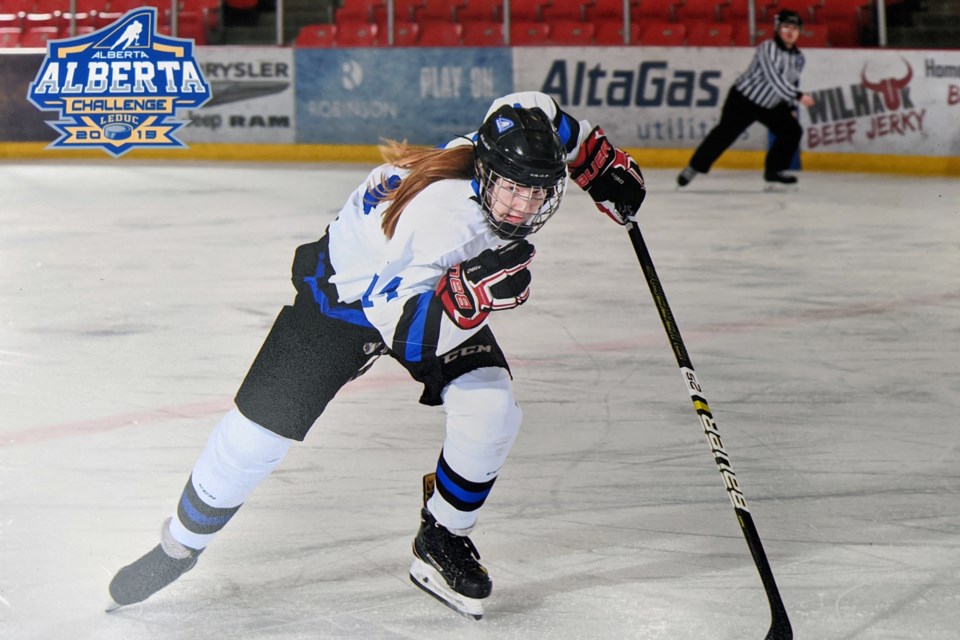 Forward Hailey Jackson is one of several players and volunteers from Central Alberta that will be participating in the 2020 Alberta Winter Games in Airdrie from Feb. 14 to 21. Submitted photo

INNISFAIL – Central Alberta will be well represented in female hockey at the 2020 Alberta Winter Games.

A total of eight players and volunteers from Innisfail, Penhold, Red Deer, and Deer County will be participating in the event in Airdrie, Feb. 14 to 21.

Alan Smith is on the executive for the IMHA and said Innisfail and area will have a strong showing at the Winter Games.

“This year’s particularly strong with five of these players that played together when they were knee-high. Seven years ago they played together and now they’re realizing their potential and coming together at this time,” said Smith. “This is one of our stronger years.”

“We’re still proud to be Innisfailians,” he said. “There’s eight people involved from this small community going to the Winter Games for girls hockey. I think that’s pretty good.”

Female hockey players in the Alberta Winter Games were born in 2005 or 2006 and are 14 and 15 years old, noted Smith, adding they all participated in the regional selection camp in Innisfail at the end of November.

“They all tried out. That was pretty intensive but their skating and hockey smarts sure came through,” he said.

Smith also noted the efforts of Innisfail volunteers helping with the Winter Games.

“They’re specifically volunteers but they’ve put a lot of time in and contributed a lot to the girls,” said Smith. “It’s good to see three volunteer roles filled from Innisfail.”

During the Alberta Winter Games, female hockey will have six teams, split into two divisions. Three from the north and three from the south, noted Smilth. Innisfail will be in the south division, represented by zones 2, 3 and 4, while the north division will be made up of zones 5, 6 and 7.

“I think it reflects highly on the coaching that Innisfail minor hockey has always provided,” said Smith. “What’s unique about these girls, even the defencemen, they’re very offensive minded. They’ve learned that from Innisfail minor hockey,” he added, noting the girls' strong power skating, drive and determination and a high hockey IQ.

“Airdrie’s a short drive up the road so hopefully a lot of Innisfail residents will come down and cheer on the girls and other athletes,” said Smith. “Hundreds of girls try out and we’re a small community, and to have five girls that demonstrate that passion and commitment, and make it, it’s something that we the town should be proud of.”