Two-time medal-winning Olympic athlete and professional hockey player Brianne Jenner has a bone to pick with the news media regarding how female hockey players are interviewed.
Dec 12, 2018 11:35 AM By: Doug Collie 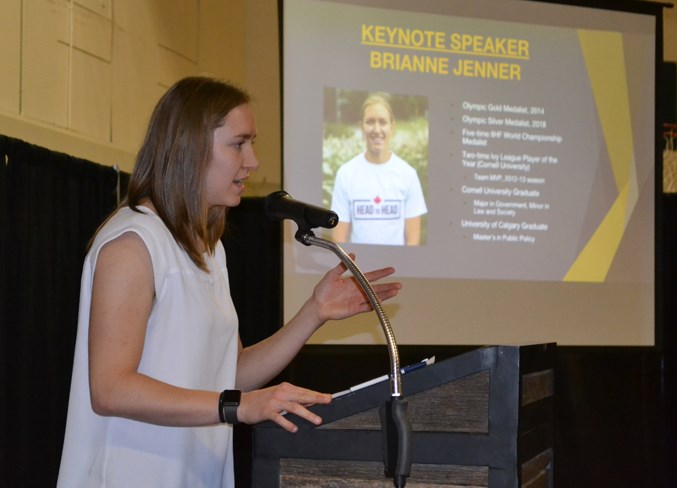 Two-time medal-winning Olympic athlete and professional hockey player Brianne Jenner has a bone to pick with the news media regarding how female hockey players are interviewed.

Jenner played her college hockey at Cornell University. She was named Ivy League Player of the Year twice and was named her team's most valuable player in the 2013-14 season.

She is now a forward with the Calgary Inferno women's professional hockey team, an assistant coach with the Mount Royal University women's hockey team and a mentor with the Olds College Broncos through the Head To Head mentorship organization.

"I bring this up because this is an area where I found my college experience far exceeded any other teams that I play on today — even on the national team, even in my professional career," Jenner said.

She said the Canadian news media at least -- seem to always ask the same sorts of questions: about the Canadian national team's rivalry with the Americans, how it feels to represent Canada, and how far Canadian women's hockey has come.

In contrast, she said, during her time at Cornell, reporters would ask the kind of questions that they'd ask NHL players: like any adjustments they need to make after a tough loss or how confident they feel in front of their stellar rookie goaltender.

"Do you notice the difference," she asked. "The questions were simply about hockey."

She questioned whether, for example, NHL superstar Sidney Crosby would be asked by reporters if he feels lucky to have such a nice dressing room after every practice.

"We need to simply celebrate elite women's hockey for what it is: a bunch of awesome athletes who are good at what they do," Jenner said.

"I'm sharing this with you because despite all my experience as a pro and at the national and Olympic levels, it was actually playing collegiate sport where I have found the athletes most respected and appreciated, where I felt the support of a community that valued me as an athlete."