Olds Curling Club takes ice out due to COVID restrictions 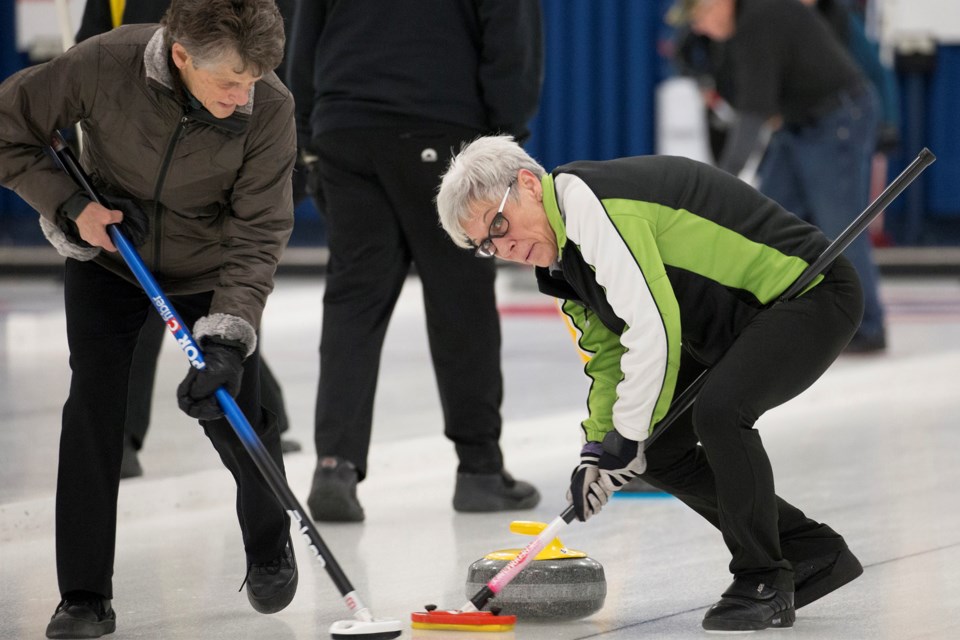 Joanne Petersen, left, and Sheila Schimke sweep a rock during the seniors open bonspiel at the Olds Curling Club. on Jan. 17, 2020. The 2020-21 season is ending early due to COVID restrictions. File photo/MVP Staff

OLDS — The Olds Curling Club has reluctantly decided to take the ice out of its facility due to the continuing COVID-19 restrictions.

The club’s board made that decision during a meeting on Jan. 21 and subsequently sent out a notice to inform its members the following day.

“With the uncertainty around the COVID-19 restrictions and not knowing when we will be able to reopen again, the board of directors has made the difficult decision to take the ice out,” the notice said.

“With ongoing operational costs to keep the ice in and no returning revenues, we feel removing the ice is in the best interest of the club.”

The board said over the next few weeks, options regarding refunding members’ payments will be assessed. Once a decision on that is made, it will be conveyed to club members.

Olds Curling Club president Jennifer Lutz said the board felt like there was really no option but to take this step.

“We just didn’t see a lot of changes coming down the pipe," she said during an interview.

“You know, you keep hoping an announcement will be made, but (Alberta’s chief medical officer of Health) Dr. Hinshaw says hospitalization numbers are still high and it just doesn’t seem like the province is going to budge any time soon.”

Lutz said before making its decision, the Olds club consulted with Curling Alberta. She said that organization has been lobbying to have restrictions changed so curlers could hit the ice “but there’s been nothing to be real optimistic about.”

The decision was especially hard to make because the Olds club was slated to host the Curling Alberta mixed qualifiers this season. However, that event has also been cancelled.

“We were disappointed that they cancelled that event. But we hope to have a chance at it next year,” Lutz said.

Lutz was asked if the club could re-bid for the mixed qualifiers.

“We really don’t have that detail yet," she said. “I would expect that it shouldn’t be too difficult to get it back, but I wouldn’t want to make an assumption on that. But we will see what we can work out.”

She noted the season usually ends in March, so “we don’t have a lot of season left.”

Lutz was asked if the club would look at holding a delayed season in the spring or summer if restrictions are lifted or modified. But she didn’t think that would happen — or be worth it.

“We’ve got a lot of golfers and a lot of people doing other things. So, I don’t think it would be worth it to risk that at this point in time. But we’ll be planning for an October opening next (fall)," she said.