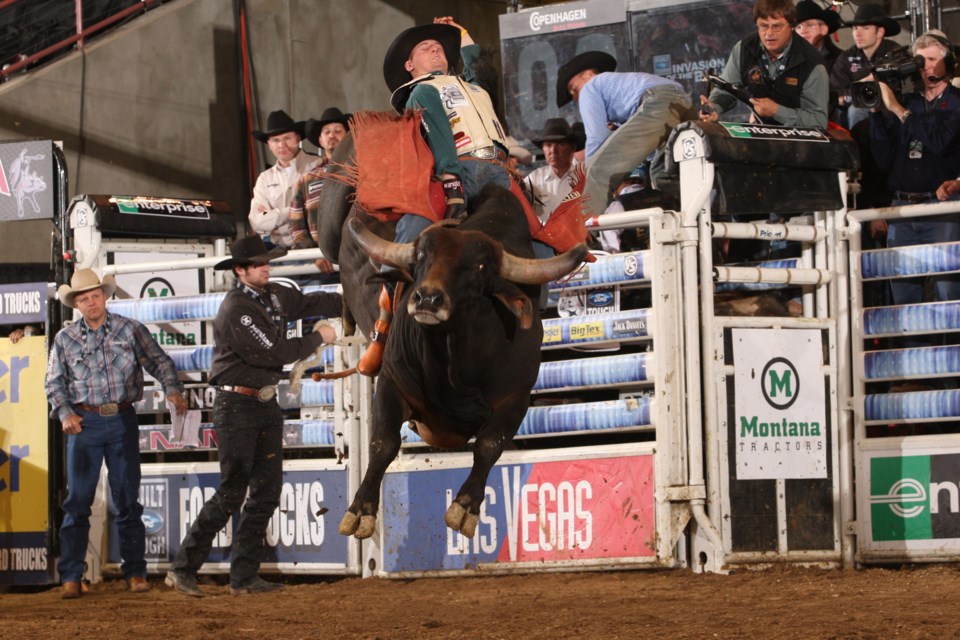 “The college has been great to us in years past. There’s been thousands and thousands of animals bucked there and it was a good venue. Easy for guys to get to, you know. I think our furthest guy was a six-hour drive (away), so it’s pretty central.”

The six-member Canadian bull riding team plus one alternate will be competing during the fourth PBR (Professional Bull Riders) Global Cup in Arlington, Texas, on Feb. 15-16.

Six teams will be battling it out for that championship: two from the U.S. and one each from Canada, Mexico, Brazil and Australia.

The remaining two riders and the alternate are expected to be named later this month.

Schiffner is Canada’s first-ever national champion and Olympic bull rider. He’s being helped out by Tanner Gerlitz, the team’s first-ever assistant coach. Gerlitz is also a rough stock coach at Olds College. He lives about 10 miles west of Innisfail.

Gerlitz retired in 2017 and began serving as an Olds College rough stock coach during the 2017-18 school year.

“It was a good opportunity for us to watch them guys ride a little bit again,” he said.

“Not only that, but just a good Q and A session for Tanner and myself to explain what we’re expecting from the guys and in return, for them guys to, you know, voice their opinions and if there’s any issues with myself as coach and Tanner as assistant coach and that.

“So it was one of them deals to just get everybody together to try to put together the best team we can.

“I think some guys were a little hesitant showing up, worried about – thinking that we were going to base everything just on that night. By no means were we, but it was good.

“We had some really good dialogue and I think some guys got some things off their chest and now they know what we expect. Yeah, so I was actually really happy with it.”

Schiffner is confident the Canadian team will do well in Arlington next month.

“I think Canada’s got some of the best bull riders in the world,” he said.

He thinks the format of the Global Cup plays to Canada’s strengths.

“It’s one of the few times that bull riders, we go there as a team, not just an individual sport. So that’s where I feel Canada can really come together and really stand out on an international level,” Schiffner said.

“Canada’s really good at team sports. We relate it back to hockey and other things like that.

“No doubt about it, there’s some standouts in the United States and Brazil, but as a team, I think that’s where we really hold the trump card. I think we can really dominate in that aspect of it.”