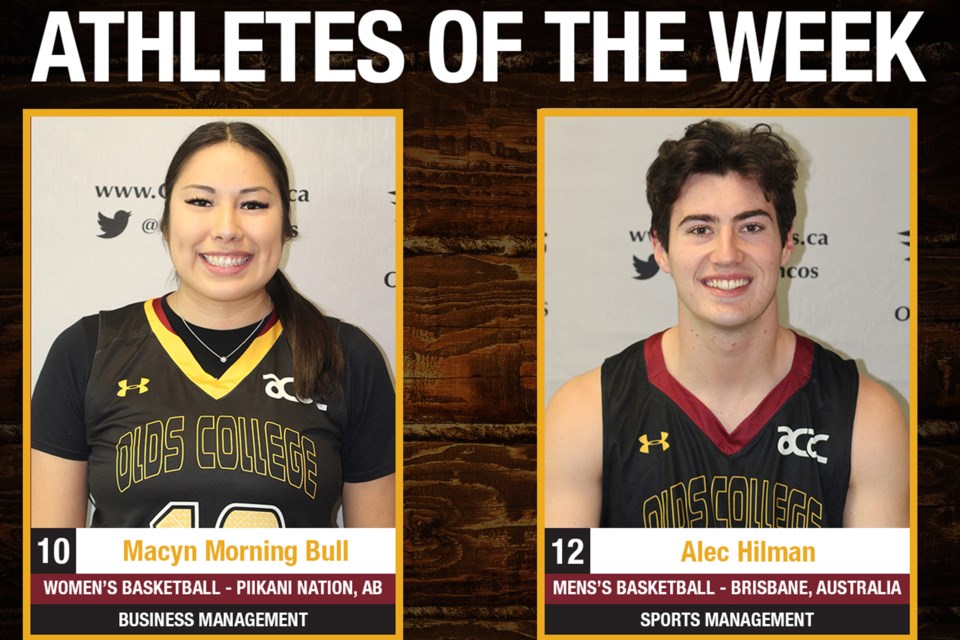 Macyn Morning Bull and Alec Hillman are the female and male A&W Olds College student-athletes of the week for Nov. 11-17. Photos submitted

OLDS — Alec Hillman and Macyn Morning Bull are the A&W Olds College male and female athletes of the week for Nov. 11-17. Both are basketball players.

Hillman was a bright spot in two losses for the Broncos this weekend.

In his third year of eligibility, Hillman showed his versatility, playing point guard (at 6-7, he is the tallest Bronco student-athlete) for the Broncos and registering 15 points and nine rebounds in the home loss on Friday.

Saturday night, in a road contest at Ambrose University, the Brisbane, Australia native, notched his first double-double of the year with 13 points and 13 rebounds.

The sports management student is trending in the right direction for men's basketball at Olds College.

Honourable mention goes to men’s volleyball’s Jesse Stoddart who had 16 digs in each win over Ambrose this weekend, to help the Broncos win their first match since Jan. 23, 2016 and then their first-ever back-to-back win since rejoining the ACAC in 2012.

Morning Bull, a fourth-year women's basketball student-athlete from the Piikani Nation in southern Alberta, had a remarkable weekend, contributing to her team’s success in both games.

She finished Friday night’s game against the Lethbridge College Kodiaks with 20 points, eight rebounds, three steals and one assist in the 109-58 win.

On Saturday, the business management student finished the night with 17 points, four rebounds, one steal and four assists in an 82-52 victory against the Ambrose University Lions.