Although the pandemic persists, Craig Anderson is confident there'll be a college basketball season this fall
May 30, 2021 6:00 AM By: Doug Collie 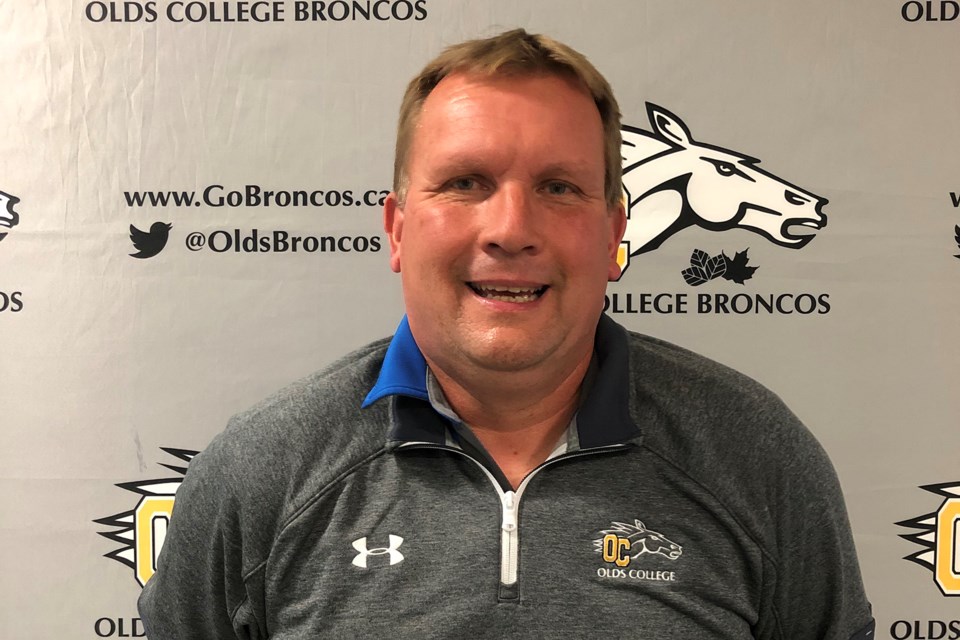 Craig Anderson, the new head coach of the Olds College women's basketball team, is looking forward to this fall when he's confident there'll be a college basketball season, despite the pandemic. Photo courtesy of Olds College

OLDS — Olds College women’s basketball team head coach Craig Anderson is optimistic there will indeed be a 2021-22 season this fall, although he’s unsure what it will look like.

“I think once the vaccinations get out there, I fully believe it’ll be a season,” Anderson said during an interview, although he admitted players may have to wear masks during travel and stay socially distanced as much as possible.

Another reason he’s optimistic is that his daughter, who attends the University of Calgary, has been told that institution is getting ready to hold in-person classes.

Assuming the season does occur, Anderson likes his team’s chances to be a force in the Alberta Colleges Athletic Association (ACAC).

They’ve recruited several strong, talented local players, including Hanna Graville and Naomi Rowe who played for the Olds Koinonia Christian School squad that won the Division 1A crown a couple of years ago.

He’s also very excited about another a local product, Amelia Furst, who he describes as “a stud at the point guard who I think is going to be a star.”

Furst was only going to be with the team for one season last year, but has decided to play for the college for this year as well.

“She's utterly talented and I’ve already talked to a few universities about her for the following year,” he said.

Other key additions include Essie Pryor from Three Hills and he’s waiting for one more top-quality to indicate whether she’ll join the team.

In addition, six of last year’s eight-member squad are back, so there's continuity.

“Our strength is in our posts. We’re strong, we’re physical. I never want to get beaten to the ball,” he said.

He noted that NCAA women’s basketball down in the US is “physical.” He wants his team to be ready to play that way as well.

“It’s real physical. And you’ve got to be a top, hard-nosed team and I believe we have that. And then we have some skilled athletes who are only going to help us throughout the year,” he said.

“So I can’t say realistically where I think we’ll belong, but I know that we have enough pieces that we’re going to compete at a high level next year.”

Last year was tough for the team, due to the pandemic.

They were a small team, numbers-wise. Initially only eight players; a couple more joined after Christmas.

And they were limited in what they could do.

“The only game we got in was we played a little intra-squad game between ourselves. Other than that, there was nothing we could do," he said.

“Now we can have groups (of) up to seven or eight, but they all still have to be spaced and it’s not like we can really do any one-on-one as far as competition work. It’s just a lot of shooting, a lot of fundamentals.”

Anderson has loved playing and coaching sports all his life and is a level 3 certified coach.

He grew up in Quesnel, B.C. and began coaching basketball in Grade 9.

Since then, he’s coached at the high school, college and university level, as well as a sports performance centre.

In addition, Anderson was a member of the University of Calgary coaching staff that won a Canada West championship.

At Olds College, Anderson’s wife Sharon and his close friend Brian Laythorpe are serving as assistants.

Craig not only serves as head coach but also looks after the offence while Laythorpe takes care of the defence. Sharon works on goal-setting and team building.

Anderson said he applied for the coaching job at Olds College because his kids are no longer playing high school basketball so he’s done with coaching at the high school level.

Also, he loves coaching student athletes at the post-secondary level because they seem more motivated to improve.

“They have that competitive instinct that makes them want to be the best they can be, and I love those kind of kids,” he said.