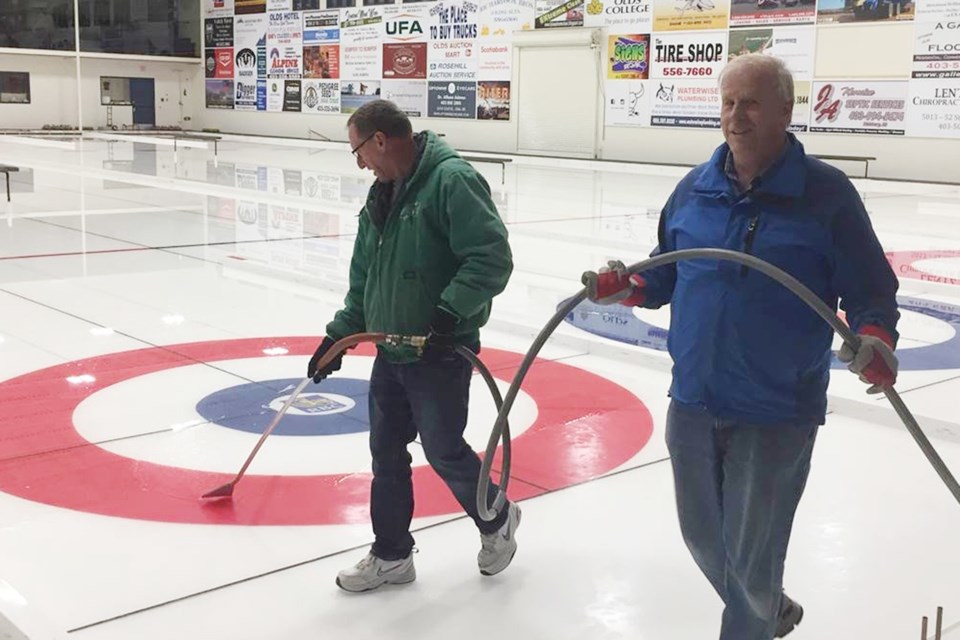 Board member Gary Head and icemaker Brian Winter put the finishing touches on the ice for the 2020 season at the Olds Curling Club. Winter was recognized for the 30 years of service during the club's annual general meeting. Photo submitted

OLDS — The COVID-19 pandemic has had a big impact on the Olds Curling Club.

It was forced to hike fees by 10 per cent to help cover the cost for a variety of COVID-related changes, including stepped-up cleaning by janitorial staff, changes to scoreboards, installation of plexiglass and stickers.

Another big change this year is a new Sterling two-person league.

“We started a two-person league on Thursdays and that’s meant for people who are just nervous about coming out, because there’s only four people on the ice at the same time, so it’s very easy to social distance,” club president Jennifer Lutz said during an interview.

“We weren’t looking to do that, but we are because of COVID. It just gives seniors or other people more options if they’re nervous about crowds. It just seemed like pretty timely,” she added.

“There’s a lot of seniors that curl so we just have to take this super seriously. Not just because of seniors, but they are a bigger chunk of our demographic, so you have to protect everybody.”

Lutz said the idea of two-person curling leagues has been around for a while, but the Olds club didn’t want it adopt it at first because it’s a more costly way to go.

“With only half the curlers, it should be way more expensive, because four people are covering the cost of running that ice sheet versus eight,” Lutz said.

That league begins play Oct. 22 at 1 p.m. Organizers are still looking for curlers for it.

The club has also dropped its Friday fun nights, at least for the first half of the season due to concerns about managing drop-ins.

“I was really happily surprised we didn’t get a lot of questions on the COVID protocols or pushback. People just want to do it right. They recognize we can’t do business as usual,” Lutz said.

“I thought we’d get pushback on the increase in fees, but people understood that things have to change and be done differently, so that was a relief.”

Lutz remains as president. Wayne Heikkinen was elected as vice-president. Tammy Schwass is the treasurer and Jennifer Woods is the club’s secretary.

Lutz is excited to have Heikkinen in the club. He moved to Olds from Rocky Mountain House a couple months ago.

“He’s curled professionally, so he’s a great addition to our club,” Lutz said. “He was in the seniors championships and curls in Calgary in super leagues.

“I think he’ll bring some new ideas to our club and expertise.”

Also during the AGM, past-president Jeff Miller was lauded for his contribution.

“He’s done a really good job, for sure, so I wish he could stay, but it is two years. I hope he comes back on the board some day soon, she said.

Meanwhile, club registration, which began online Sept. 28 and in-person during the AGM, is continuing.

Olds Grizzlys prepare for a tough opponent
Nov 11, 2020 8:00 AM
Comments
We welcome your feedback and encourage you to share your thoughts. We ask that you be respectful of others and their points of view, refrain from personal attacks and stay on topic. To learn about our commenting policies and how we moderate, please read our Community Guidelines.