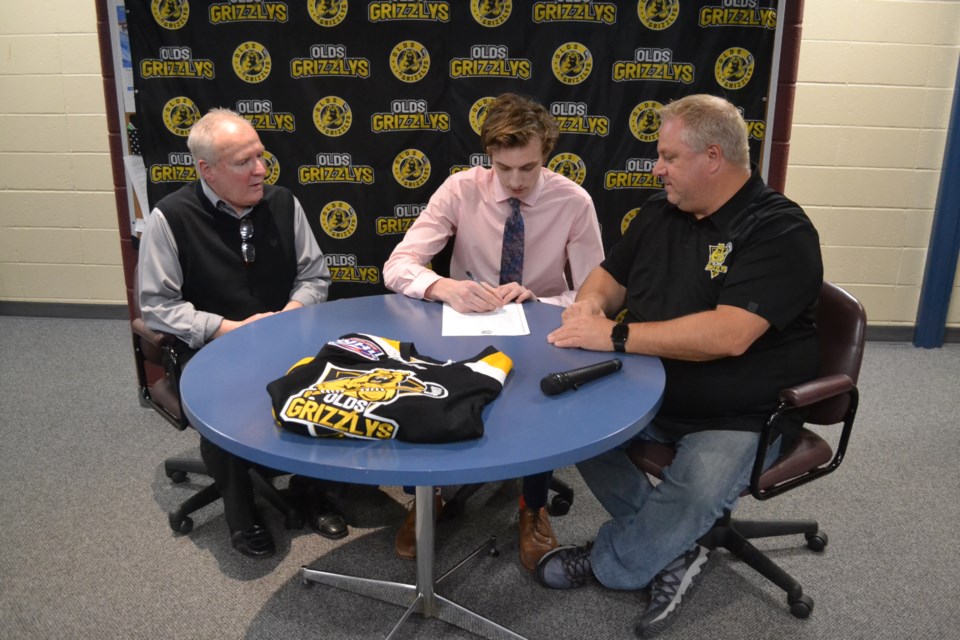 Olds Midget AA Grizzlys centre/forward Jordan Saunders is now a member of the Junior A Olds Grizzlys. Here, Saunders signs on with the club during a Feb. 5 news conference at the Olds Sportsplex. Looking on are head coach-GM Scott Atkinson, left, and Olds vice-president Trent Wilhauk. Doug Collie/MVP Staff

OLDS — The Olds Grizzlys Junior A hockey club took another step into the future when centre/forward Jordan Saunders signed a letter of intent (LOI) on Feb. 5 to play for the team next season.

Club vice-president Trent Wilhauk told the crowd it was the team’s first LOI signing of the season.

Club officials were especially excited because Saunders is a local kid. He’s currently a member of the Midget AA Grizzlys.

According to eliteprospects.com, as of last week in this Midget AA this season, Saunders had scored 21 goals and obtained 17 assists for 38 points in 26 games. He had amassed 48 minutes in penalties.

“I’m not as familiar as I’m going to be with Jordan, but I’m told by all our scouts and our organization that he’s going to be a player that we’re going to be able to grow into a significant player in the AJHL,” Atkinson added.

“I’m happy to sign. I’m excited for the next season,” Saunders said.

“On behalf of the Grizzly organization Jordan, we’d like to thank you for choosing the Grizzlys and look forward to a long career with us,” he said.

Atkinson echoed remarks he’d made earlier after joining the Grizzlys that his goals are to sign local kids whenever possible and to place a strong emphasis on character as much as talent and potential.

“So to me it’s character first thing and after that, it all becomes just sort of a menagerie of skills that we need to develop both on ice and off ice,” he said.

Alberta Junior Hockey League commissioner Ryan Bartoshyk was in the building for the signing.

“I know it’s a big step to have your sons play junior hockey and it’s a long route to get here, Bartoshyk said, noting he played in the league about 20 years ago.

“For me it’s about the athletes and what they can achieve and (the) experience that they have and I’m really confident and proud of this group we have in Olds here that they can provide that,” he said.