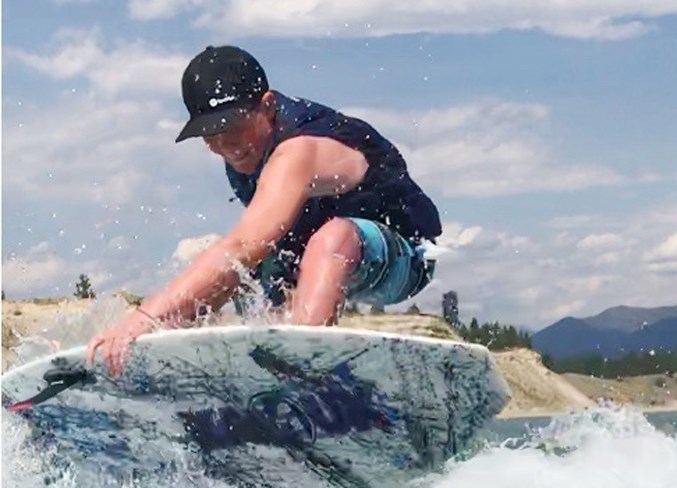 Keegan Hodgson in action on his wakeboard. File photo submitted

OLDS — Local wake surfer Keegan Hodgson has a tough decision to make after having won the world championship in his division.

Should he turn pro or remain in the outlaw (semi-pro) division for another year?

Hodgson, 15, is still mulling that over.

Wakeboarders ride on what look like big wide surfboards while being towed by boats.

He’s aware that the guys in the pros would be even better than the semi-pro guys he’s battled.

“They’d be the top guys in the whole world,” he said during an interview last week.

That’s a pretty incredible accomplishment for a guy who only took up wake surfing three years ago.

The championships were done a little differently this year, due to the COVID-19 pandemic. Many events were held virtually.

Only the top eight riders received invitations to the 2020 World Wake Surfing Championships.

On Sept. 12, Keegan received a call that he had made it into that event as a wild card.

The Canadian virtual event was filmed in Vernon, B.C. on Sept. 19.

Films made involving competitors were judged and put together with the live event held in Fort Worth, Texas on Oct. 1 - 3.

“It was a crazy couple of weeks waiting and wondering as the results were kept secret until the live event was streamed,” Keegan’s dad Karmen wrote.

The finals on Day 3 consisted of five riders from across the globe.

Keegan was the only Canadian rider. Other competitors included one from the US, two from Japan and one from Russia.

“It was a great time and I’m super excited,” Keegan said during an interview.

Keegan said the key to his success was “just lots of practise and lots of determination."

“I practised all summer and that’s exactly what I trained for for the last three years,” he said.

Another key to his success this year was landing some spectacular tricks.

“A shove, backside 180 and switch-big spin were some of my big tricks that I landed that I was hoping to get this year. And I landed them all in my finals run, so I was pretty excited about that,” he said.

Keegan said other guys landed some pretty great tricks too, but  “I guess I just had some better tricks and it just turned out in my favour.”

Keegan agreed with his dad that another key to his success was that he went out to Vernon a week early for some extra training and practice.

This year’s wake surfing season was filled with success for Keegan.

He moved up from the amateur division up to the Outlaw Men’s Surf Division, starting the season ranked 32nd.

However, as a result of one live event in Arizona and five online competitions, he rose up to 11th position in the world ranking system (WRS).

In addition Keegan was also named the up and coming male athlete of the year by the CWSA.

His dad describes that as “a very prestigious award, voted on by his peers in the sport.”