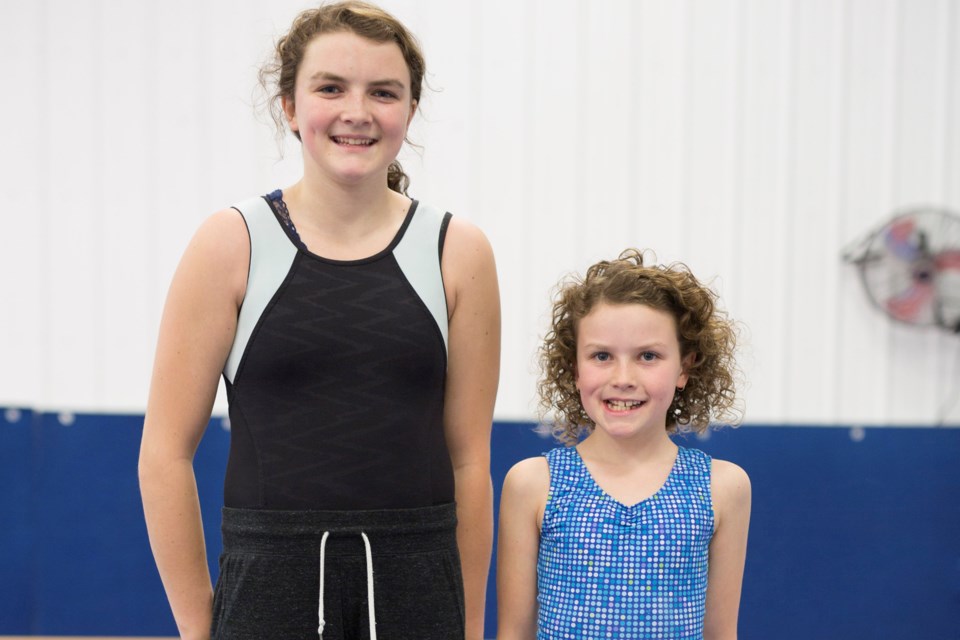 Kia, left, and Kayman Waiting pose for a photo during a recent Olds Gymnastics Club practice. The sisters are two of many travelling from Didsbury to Olds to train. Noel West/MVP Staff

DIDSBURY - Not having a gymnastics club in Didsbury is not stopping several locals from pursuing their favourite sport. Six girls in total are travelling to Olds to train and compete with the Olds Gymnastics Club.

Most of the almost 200 members of the Olds Club practise two or three times a week with competitions taking place on weekends starting in the new year.

The Olds club hosts its home meet, the Hay City Classic, in March at the Olds College gym.

Sisters Kia and Kayman Waiting are two of those travelling from Didsbury to Olds to train. They both really enjoy the camaraderie they share with their teammates.

Kia has been with the club for 10 years, while her younger sister Kayman has been involved for around five years. All the club members compete in all four events: bar, vault, beam and floor.

"We train year round from January to January," said Kia. "I enjoy the bars. I'm really good at it. I really like the community approach of our team. That we have a family of people who cheer you on."

Kayman enjoys having fun and being around her friends at the gymnastics club.

"My friend, that's the only time I really get to see her because she moved to Olds," she said.

Kia broke her arm last year but came back to finish third at provincials in bars.

"I like how you flip around on the bars," she said.

Kayman prefers the vault because it's a little easier than the other events.

Kia will be trying out for the Alberta Winter Games on Dec. 13. Both girls will be competing in meets from then until March.

Kia was one of seven girls who qualified for provincials this year in Edmonton from the Olds Gymnastics Club. The other six were: Reegan Johnston, Emma Legris, Jardine, Cecelia Hildebrandt, Tuesday Martinson and Giles.

"I'm hoping to return," said Kia. "Our club had the most girls, seven, who made provincials from our small-town club."

Kayman has competed in several nearby meets and finished as high as second overall.

"We work on different events," said Kia. "I'll work on, say, my back handspring on the beam and getting my hands in the right position on the bars."

"I've been working on my kip on the bars," said Kayman. "It's where you do a glide swing under the bars and you bring your toes to the bar and shoot yourself up."