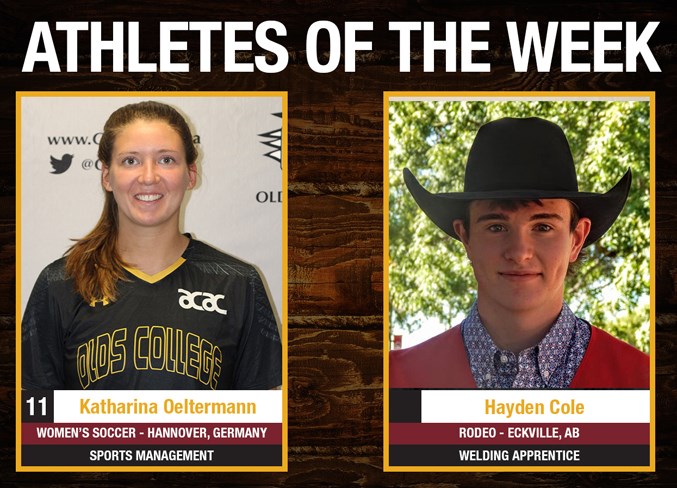 Katharina Oeltermann, the captain of the Olds College Broncos women's soccer team, left, and Haydon Cole, a rookie on the Broncos' rodeo team, are the A&W and Olds College athletes of the week for Oct. 14-20.

The A&W Olds College athletes of the week for Oct. 14-20 have been announced.

Cole had a great weekend at the Canadian Intercollegiate Rodeo Association (CIRA) rodeo, held Oct. 19-20  at Lakeland College in Vermillion.

Watch for this young talent competing this week in the Canadian Finals Rodeo in Red Deer in the novice saddle bronc event.

The college is excited to have Hayden on its Broncos varsity team.

Oeltermann has been a leader, both on and off the field, for the women’s soccer team this season.

As a defender for the team, the sports management student was a key factor on both ends of the field in a dominant 4-0 clean sheet win over Ambrose University.

The Hannover, Germany native scored three goals in the game — two of which were headers off set plays. The win secured the Broncos' position in the post-season for the third time in four seasons.

Oeltremann finished the season second on the Broncos with seven goals, which tied her for 16th in the Alberta Colleges Athletic Conference (ACAC) and sixth in the ACAC South, which is amazing considering her position as a defender.