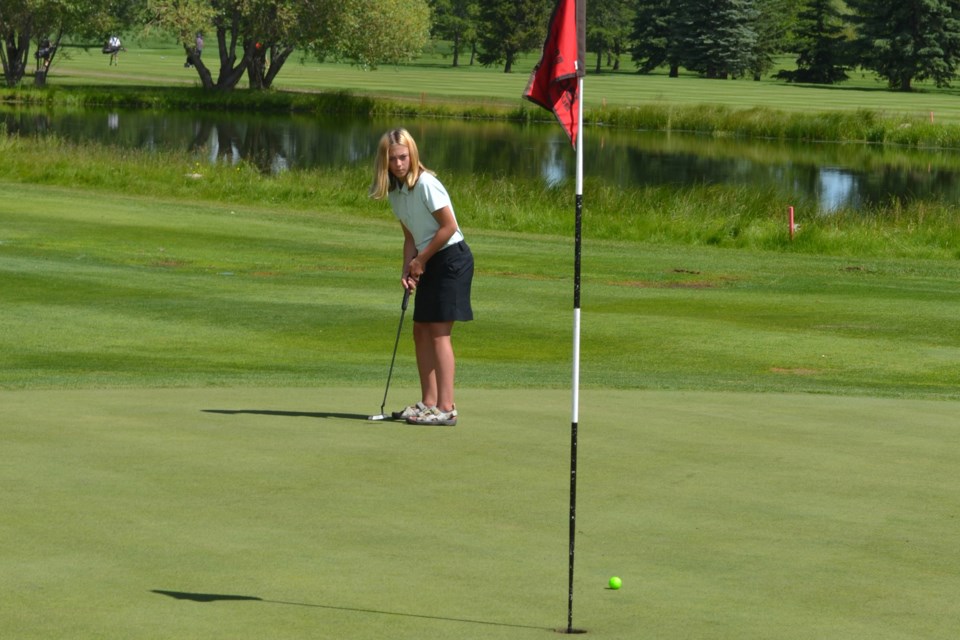 Morgan McInnis, 11, of Carstairs, watches on Thursday, July 15 as her ball heads toward the hole during the Olds Golf Club's 2020 Junior Open Golf Championship.

OLDS — Two out-of-towners won the boys' and girls' sections of the annual Olds Junior Golf tournament on July 15 at the Olds Golf Club.

Olivia Leung of Calgary won the girls' section and Rory Wutzke of Camrose was the boys' champion.

But it wasn’t easy for either of them.

The girls' section saw its first sudden-victory playoff this season when Leung and fellow Calgarians Kali Yeske and Aleah Shields-Ropide, who is only nine years old, finished in a three-way tie with a score of 85.

Leung, 14, took the championship with a par four on the first extra hole.

Leung, Yeske and Shields-Ropide all qualified for the Aug. 28 championship at the Wolf Creek Golf Resort.

On the boys' side, Wutzke shot a one under par 71 for a two-shot win over Quinn Laidlaw of The Winston.

Nolan Edwards of Okotoks, along with Jeremy Hart of Calgary, tied for third place with a score of 75.

As a result, Wutzke, Laidlaw and Edwards all qualified for the tour championship.

Reid Williamson of Olds cracked the top 10. He tied for ninth place with a score of 81 and finished fourth among boys born in 2004-05.

Nathan Flewelling of Innisfail, who shot an 87, tied for sixth place among boys born in 2006 or later.

The tournament was sold out, attracting a total of 73 players from Edmonton to Lethbridge.

COVID-19 makes hockey season a challenge
Aug 2, 2020 9:00 AM
Comments
We welcome your feedback and encourage you to share your thoughts. We ask that you be respectful of others and their points of view, refrain from personal attacks and stay on topic. To learn about our commenting policies and how we moderate, please read our Community Guidelines.