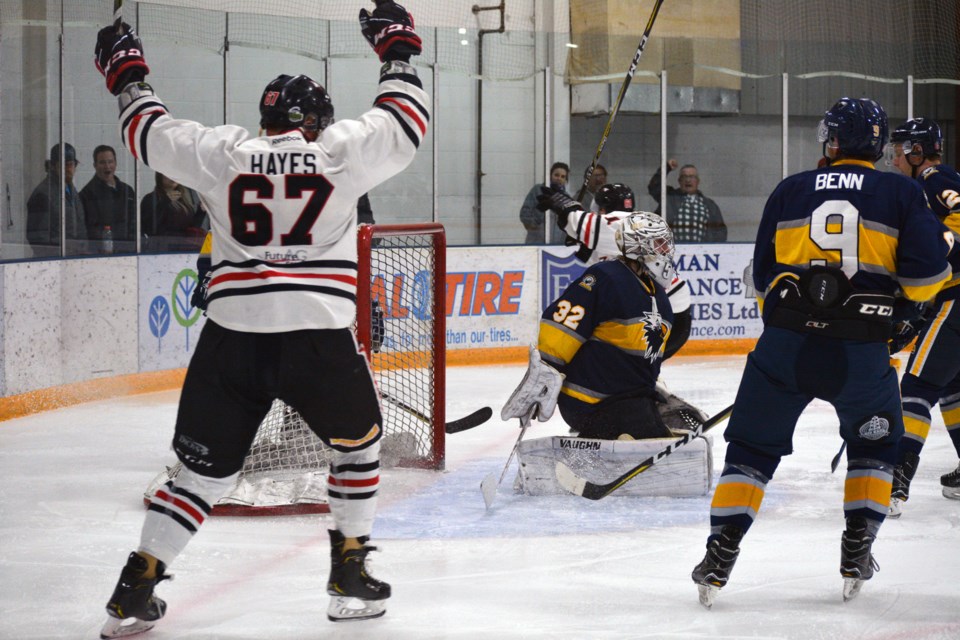 The Innisfail Eagles are back in action after winning their season opener 4-3 on the road against the Stony Plain Eagles on Nov. 23. Colton Hayes, wearing number 67, is one of several returning Innisfail players this season. File photo/MVP Staff

INNISFAIL – The Innisfail Eagles earned themselves a victory in the first game of the team's regular season on Saturday, Nov. 23.

The Birds took on their namesake rival, the Stony Plain Eagles, on the road at the Glenn Hall Arena and came away with a 4-3 regulation win.

“It was a game which really wasn’t a 4-3 game. We were winning 4-1 with about three minutes left in the game and the referee gave (Stony Plain) a five-on-three powerplay so they pulled their goalie. They ended up getting two power-play goals,” noted head coach Brian Sutter.

Innisfail jumped out to a strong start with a 3-0 lead in the first period. Stony Plain netted their first goal in the second period, making it 3-1 going into the final frame. Innisfail regained their three-goal lead with a power-play marker from Riley Simpson in the final 20 minutes.

“We did a lot of things really good, we played really well,” said Sutter. “Allen York played well in goal and we were good defensively.”

Sutter noted several new players in the line-up during the game, whose outstanding play helped Innisfail to their first win of the season.

Some of those new faces this year include Johnathan Aitken, Kurtis Keats, Parker Smyth, and Quinton Lisoway.

“We had three or four new guys in the lineup that played really, really well, along with some of the older guys like Chris Bailer, Colton Hayes. Those guys were solid,” said Sutter.

“We had Johnathan Aitken play his first game for us. He’s played a little bit in the National Hockey League and is a good American League player.

“I thought he was one of the best forwards on the ice,” he added, noting newcomer Quinton Lisoway. “Quinton deflected two goals that we ended up scoring on and he was an integral part of us winning.”

Special teams also factored into the victory on Nov. 23.

“Our powerplay scored what turned out to be the winning goal, from Riley Simpson,” said Sutter. “In the third period he scored the fourth goal. We only had two powerplays the whole game and they (Stony Plain) had five. That was a big difference in the game.”

With the first game now under their wing, the Eagles are looking forward to their home opener on Saturday, Nov. 30. The Birds will again be collecting new toys and toques during first intermission for their annual Toy and Toque Toss for the Innisfail Christmas Bureau.

“We’re excited about it. We always look forward to playing in front of our fans,” Sutter concluded.

The game will be against the Stony Plain Eagles at the Innisfail Arena. Puck drop is 8:15 p.m.