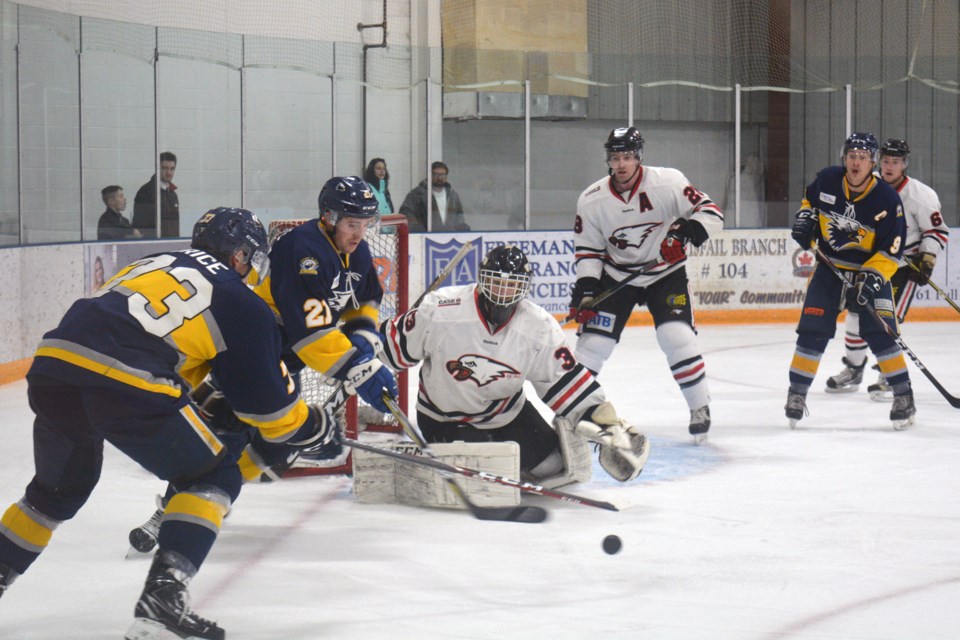 INNISFAIL – The Innisfail Eagles started the new year with a win.

The senior men's hockey Birds played their first game of 2020 on the road Saturday, Jan. 11 against the Stony Plain Eagles and came away with a 4-2 victory.

“We had a full lineup. We added a couple of more guys from the city of Edmonton, they’re firefighters,” said Ryan Dodd, Innisfail Eagles general manager and assistant coach.

Several new faces were on the ice Saturday, along with returning veterans, including Simon Desbiens, who made his return to the Eagles after injuring his shoulder two years ago, noted Dodd.

“The boys came out and it was pretty fast-paced,” he added, noting the role of special teams.

“We had to kill two, five-on-threes (powerplays for Stony Plain) early in the game and fortunately our club was spot on. We killed both of those off and we scored a short-hander on one of them,” said Dodd.

“We had one even-strength goal, one short-handed goal and two power-play goals, so specialty teams really helped us in that game.”

The Innisfail Eagles have now played four games and sit with a 3-1 win and loss record on the season, ahead of Stony Plain, the only other team in the Chinook Hockey League.

Stony Plain makes a trip to Innisfail this Saturday at the Innisfail Arena. Puck drop is 8:15 p.m.

Junior curling bonspiel numbers down a bit
Jan 27, 2020 6:20 AM
Comments
We welcome your feedback and encourage you to share your thoughts on this story. We ask that you be respectful of others and their points of view, refrain from personal attacks and stay on topic. To learn about our commenting policies and how we moderate, please read our Community Guidelines.