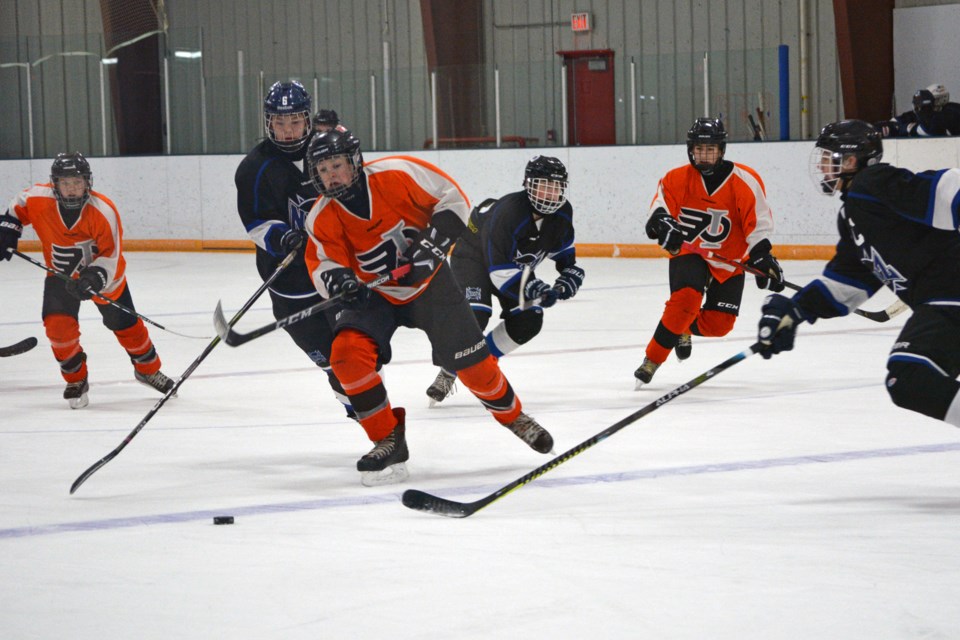 The Bantam A Fourlane Ford Flyers finished in second place in their annual home tournament, after a 4-3 loss to the Vermilion Tigers at the Innisfail Arena on Jan. 5. Kristine Jean/MVP Staff

INNISFAIL – The Innisfail Bantam A Fourlane Ford Flyers fought a hard battle in the final of their home tournament but finished in second place.

They lost a close contest 4-3 to the Vermilion Tigers.

“It was a tight game and we played hard and everybody was going. We just gave up a power-play goal late and couldn’t capitalize (on chances),” said Tyler Hirsche, head coach. “They’re a good team and we’re a good team. It was a very good game.

“It was a great home tournament. We won three games and lost the last one, but that’s the way she goes,” he added.

The annual home tournament for the Bantam A Flyers took place at the Innisfail Arena Jan. 4 and 5.

“We have five visiting teams and six with Innisfail, in the tournament,” said Kathy Dilone, tournament coordinator. “We had over 50 teams from across Alberta try to get into our tournament.”

This year they welcomed teams from Vermilion, Edmonton, Indus, Strathmore and Sturgeon.

Each team played two games in the round robin on Jan. 4, with outcomes determining the semifinal and final matchups on Jan. 5.

Innisfail played Edmonton and Indus in round robin play on Saturday and beat Strathmore in the semifinal 8-1 on Sunday, to earn a spot in the finals against Vermilion on Sunday.

There are three Bantam teams this year (A, B and C), noted Dilone, all of which play in tier two of the Central Alberta Hockey League (CAHL). The Bantam A Flyers consist of 14 players, who are either 13 or 14 years of age.

The Bantam A Fourlane Ford Flyers currently sit in second place in the league's tier two.

As with every year, the team, volunteers and the tournament coordinator aim to make the two-day event fun for everyone, said Dilone.

“We have Heart and Hustle and MVP awards for each game and each kid gets a swag item and we also did snack bags for the kids,” she said, noting they also have a player draw on their raffle table and a special keepsake from the tournament.

Every year, the tournament aims to encourage team bonding and strengthen camaraderie amongst players, as well as help them regain their focus after the holidays, noted Dilone.

“Now they have the chance to bond together as a team after having a break, and hopefully they can go in and do well for the rest of the season,” Dilone concluded.