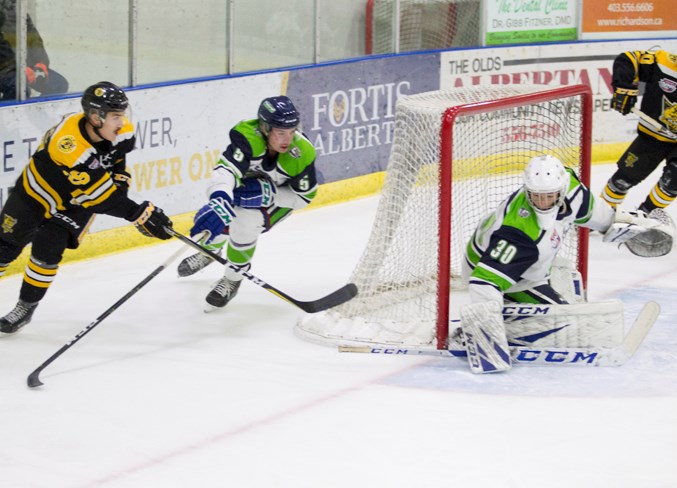 Olds Grizzlys player Tye Scherger puts pressure on at the Calgary Canucks net during a game at the Olds Sportsplex on Oct. 26. The Grizzlys won, 7-1.

They're still a long way from .500, but Olds Grizzlys general manager and head coach Joe Murphy is confident the team is going in the right direction.

"We've actually had some really good hockey. The group has certainly closed the gap on the league in terms of our competitiveness," he said during an interview with the Albertan.

"I don't think we even had three wins before Christmas last year, to be honest. At one point last year, I think we got a win in our 17th game last year. So in terms of comparison it's certainly much better."

Murphy said the Grizzlys are getting tantalizingly close to winning more games.

"When we lose, we lose to very good teams by one or two goals. Those aren't translating into wins yet. We don't have enough depth there yet; we're not executing quite well enough yet, but the group is doing really well with it," he said.

"I think we're getting quality scoring chances. Now we have to kind of cross that barrier, going from a team that gets chances to a team that scores.

"I mean, we're attacking teams. We're regularly outshooting teams in their own rinks too, so we're having lots of puck possession. Now we've just got to go from a team that gets chances to a team that really has some venom.

"We're just not hitting the net enough or getting secondary opportunities."

"It's getting there. The guys are starting to grab onto it — how to generate offence with percentage and move through it."

"Our defence and our goaltending has been pretty good," he said. "I mean, there's always mistakes, there's always breakdowns, but we have good puck skill back there, so we're doing a much better job of moving pucks and playing faster hockey.

But he'd like to see them do a better job of boxing out.

"Just owning that high percentage ice where goals are scored from," Murphy said.

He said a couple of trades have also added some experience, speed and scoring depth.

Earlier this month they acquired forwards Bryce Osepchuk from the Grande Prairie Storm and Zafir Rawji from the Sherwood Park Crusaders — for future considerations in both cases. Both are right-hand shots.

They also re-acquired Logan Bromhead, who was with the Fort MacMurray Oil Barons. He actually  started the season with the Grizzlys last year. Logan was acquired for Hunter Leslie.

"All three players are very offensive minded, and all played in the league last year. I wanted to add experience and offence up front, and this move was aggressive to that end," Murphy said.

Osepchuk was born in 2000. He stands 5 -10, weighs 180 pounds and is in his second year in the league. Osepchuk accumulated 15 points and 97 penalty minutes in 53 games last season.

Leslie, 19, has appeared in 66 games with the Grizzlys over the past two seasons and has recorded 14 points (nine goals and five assists).

Bromhead, 20, has played in five games with the Oil Barons this season and at the time of the trade had scored three goals.