Making smarter decisions with the puck is a high priority, head coach says
Oct 6, 2020 9:00 AM By: Doug Collie 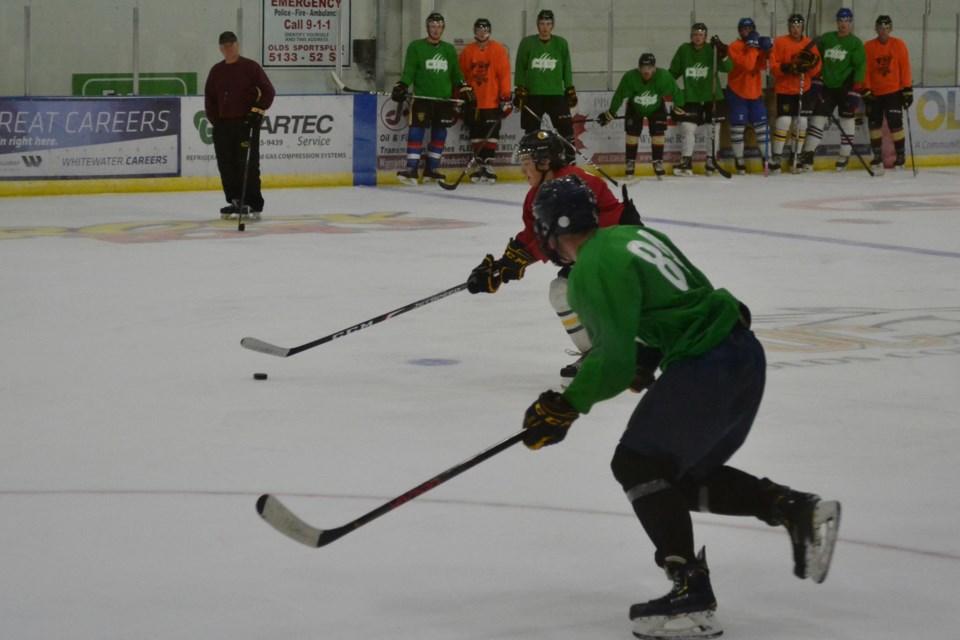 OLDS — The Grizzlys’ pre-season is finally about to get underway.

Due to COVID-19 protocols, the team will only be playing one team: the Calgary Canucks. They meet six times during October.

The first game in that series takes place Oct. 9 in Calgary.

Grizzlys head coach-GM Scott Atkinson says to his knowledge they’ll play their first home game of the new pre-season Oct. 10 at the Sportsplex.

As it’s still pre-season, the coaching staff has not yet solidified the lineup.

But Atkinson already has confidence they’ll be better than the 2019-20 edition of the team which finished in sixth place in the Viterra South Division of the Alberta Junior Hockey League, 14th overall in the league.

They qualified for the playoffs, but were beaten four games to one by the Drumheller Dragons.

“The team’s going to get better. We have great chemistry and the team works hard. We’ve been working extremely hard,” Atkinson said during an interview.

“I think we’ve recruited well; we have better players.”

One main priority has been to get faster, and Atkinson is confident that’s happened already.

Atkinson has been asked if the players he’s recruiting are bigger than previous editions of the team.

“To me, like it’s like everybody (asks me) ‘are you getting bigger? Well bigger’s only better if it’s better, right? So getting big doesn’t mean anything unless you get better,” he said.

And one way to get better, he said, is to keep control of the puck; make smarter decisions with it.

Last year, the only team to finish worse than the Grizzlys in the Viterra South was the Canucks who finished last in the seven-team division.

Despite that, Atkinson said he and his squad won’t be taking the Canucks lightly during the pre-season series.

“I wouldn’t say the last little while here we’re going to get overconfident about anything,” Atkinson said.

“The Calgary Canucks in my mind are a pretty good hockey team as well – and well managed. I expect they’re trying to get better and I’m not thinking they’re going to be an easy opponent at all.

“I’m not really worried about the other guys. We need someone to play to measure our performance against but for me, it’s all about our team,” he added.

“We have to get better. I’m not worried about the Canucks from the perspective of looking for an easy opponent, I’m worried that they’re a great team and we’re not good enough. That’s what keeps me up at night.”

On Oct. 1, the Grizzlys announced they had acquired 2001 forward Josh Zinger from the Fort McMurray Oil Barons for future considerations.

"We are super excited to add Josh to our organization,” Atkinson said in a post to the Grizzlys website. “Josh has explosive speed, plays in all situations and high character that will add to the fabric of our dressing room."