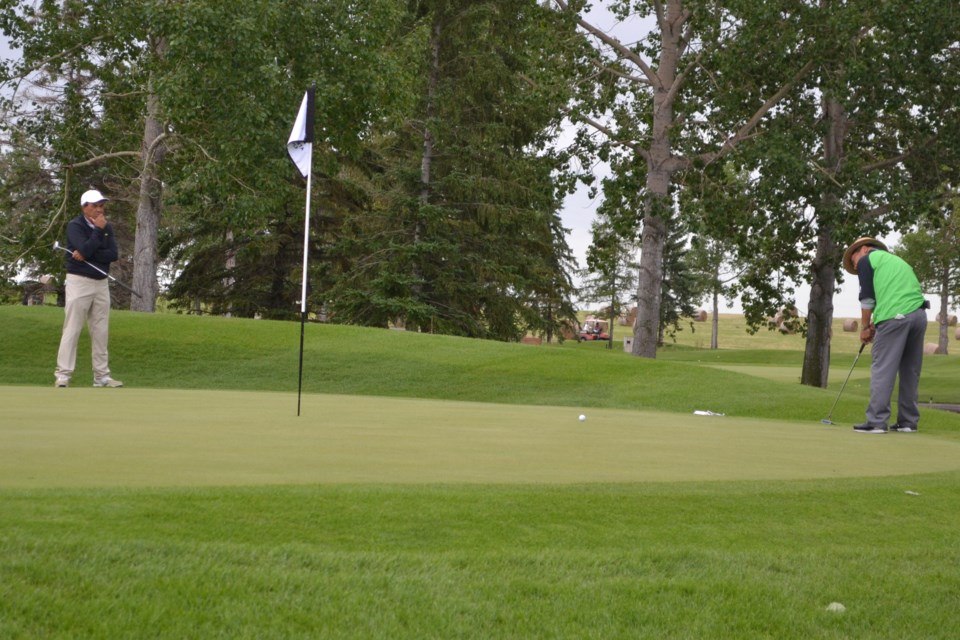 Grant Oh of Calgary sinks a putt on the 18th green to win the Alberta Senior Men's championship tournament Aug. 7 at the Olds Golf Club while James Varnam of New Zealand, far left, looks on. Both men were among those who praised club staff and volunteers for the shape of the course and the way they ran the tournament. Doug Collie/MVP Staff

OLDS — Competitors praised the conditions at the Olds Golf Club as it hosted the Alberta Senior Men’s championship tournament Aug. 5-7.

Local golfers and club staff were proud of those conditions and pleased to hear the compliments as well.

“You could play a PGA tour event here, it’s that good. They’ve done an amazing job,” said James Varnam of New Zealand who plays on golf courses around the world and finished second during the tournament.

“This is a difficult golf course. You’ve got to have good quality golf shots and you’ve got to putt with perfect speed around here,” he added.

Grant Oh of Calgary who won the tournament agreed.

He was especially impressed with the shape the course was in after rain fell all morning and into the afternoon on Friday, the final day of the tournament.

“You know what? I have to give great credit to the Olds maintenance staff here and what they do and the drainage,” Oh said.

“Even with all the rain we had, the first four holes when it was still raining pretty hard, the greens were still rolling pretty true – a little bit slower but it wasn’t like it was waterlogged or anything.”

Alberta Golf director of communications Kevin Smith also paid tribute to the staff and the shape of the course as he presented awards after the tournament ended.

“Your crew, your superintendent (Jason Clouston) – the course, from all accounts, was unbelievable this week,” Smith said to Olds Golf Club pro-manager Wade Bearchell.

“The greens were fantastic for championship golf and great work today to get the course playable this morning," he said.

Bearchell said that’s due to all the hard work of the staff.

Local golfer Keith Newton who played in the tournament – and finished in a tie for 14th place – was happy with what he heard from his fellow competitors during the tournament.

“What I liked even more was how many compliments our golf course got,” Newton said during an interview.

“It was incredible. Everyone just (said) ‘man, these greens are just awesome.’ And these are guys from country clubs that are saying ‘you guys are so lucky.’ And they said, ‘I’m coming back here again.'

“So I was so proud of our golf course, the way it was received and the shape that it was in."

Newton also expressed gratitude to Bearchell, Clouston, pro shop staff and all the volunteers “who just dived in and helped.”

“Overall I thought it was just a fantastic week,” he said.