Four Olds College Broncos soccer players have been named to Alberta Colleges Athletic Conference (ACAC) all conference teams and one was also named rookie of the year.
0
Oct 30, 2019 9:20 AM By: Jadon Frank 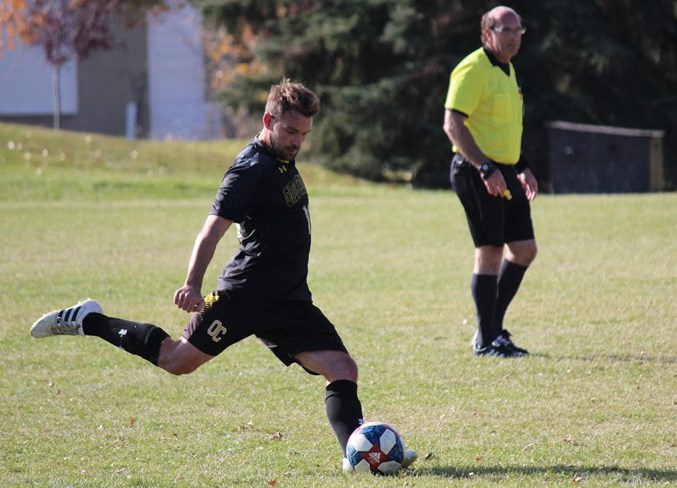 Fabian Gromenida of the Olds College Broncos men&#8217;s soccer team gets ready to kick the ball during ACAC action.

Four Olds College Broncos soccer players have been named to Alberta Colleges Athletic Conference (ACAC) all conference teams and one was also named rookie of the year.

Oeltermann had a great year for Olds College, where she was strong on both offence and defence.

She finished the season second on the Broncos with seven goals, which also tied her for 16th in the ACAC and sixth in the ACAC South.

Oeltermann also had two assists for 16 points. She also took 23 shots and had two game winning goals (seventh in the ACAC and fourth in the ACAC South). She was 2-for-2 on penalty kicks. This is an amazing feat for a defender.

Despite missing the final two games of the season due to injury, she ranked second in the ACAC in save percentage with a .872 (top in ACAC South), sixth in goals against average with 1.50 (third in ACAC South), third in saves with 102 (2nd in South) and third with six wins (tops in the South).

Hallock had three shutouts this season (sixth in ACAC and third in ACAC South). She was also ranked fifth with 900 minutes played (top in ACAC South).

“Her solid work ethic, technique and leadership have been a major asset to our team," Broncos soccer head coach Niels Slotboom said. "Julianna has shown a lot of growth on and off the field this season and we are proud to have her as part of our Broncos family."

Rodney had an amazing year as a second-year forward for Olds College, ranking highly in several statistical categories.

As was reported earlier, a highlight of the year for Rodney was an ACAC record-tying seven goals against Red Deer College on Oct. 13.

Gromenida had a great year as a fifth-year forward for Olds College, ranking highly in several statistical categories.