A product of Sundre's minor hockey association has just wrapped up a very successful season playing hockey in Iceland. Adam Beukeboom, who was born and raised in Sundre, was the top goaltender for the Skautafelag Akureyrar Vikingar (Vikings).
Mar 29, 2019 12:31 PM By: Mountain View Today Staff 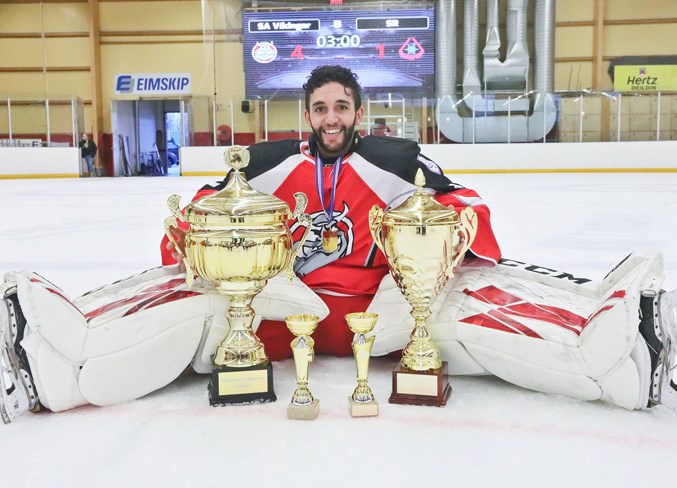 Sundre&#8217;s Adam Beukeboom poses with some of the silverware he won playing in Iceland.

A product of Sundre's minor hockey association has just wrapped up a very successful season playing hockey in Iceland.

Adam Beukeboom, who was born and raised in Sundre, was the top goaltender for the Skautafelag Akureyrar Vikingar (Vikings).

In February the Vikings captured the Iceland Hockey League championship and Beukeboom was named most valuable player (MVP) as well as top goalie.

Beukeboom said playing in Iceland and winning the cup was an amazing experience.

"This season went pretty much as well as it could have gone, I think," said Beukeboom. "My goal coming here was to get my foot in the door in Europe and showcase myself for other teams here as much as I could. We got to play in the Continental Cup in the first half of the season, which is a champions league-type event that spans over the season."

Beukeboom's team ended up winning the first round in Sofia, Bulgaria despite being underdogs, and advanced to Riga, Latvia for round two.

"We were a little outclassed but still held our own and managed to pull off a win in our last game there," he said. "After this we continued our regular season play where we won first place in the league and eventually swept the playoffs. I would consider it a phenomenal season in all regards."

"I wasn't getting the opportunities I was hoping for so I started searching jobs over in Europe," he said.

"There were a handful of people I contacted and eventually the contract for Iceland came up. It was late in the summer at that point and I needed a place to play so I figured, 'when is the next time I'll go to Iceland?' And the next week I was on a plane."

Beukeboom said he's enjoyed his time in Iceland and equates the level of play to junior A in Canada.

"Because there are so few players in Iceland. The skill levels of the individual players range greatly from guys that have played in other fairly decent leagues, pro and junior, to teenagers playing their first games at that level," he said. "Any of the Icelanders playing, which is about 75 per cent, have full-time jobs as well, so from game to game your lineup would change depending on who could make it."

He said the teams play on an Olympic ice surface, which is much bigger and took him some time to get used to. Beukeboom found the people to be very friendly and similar to Canadians as far as being kind and carefree.

"Once the Icelanders learned I wasn't a tourist they treated me as one of their own and I got to properly experience the culture," he said. "The language is something else. I've picked up a few things but I've heard of people who have lived here for 20 years and can't speak it. Otherwise, it is a wonderful place. The town I stayed in, Aukureyri, was very reminiscent of Whitehorse, just without the trees. Amazing though."

Beukeboom said it was great to have such a successful season in his first year overseas.

"Winning was unreal," he said. "My teammates were as good as a group of guys as I've ever had a privilege to play with. It was my first time winning a championship so that in itself was incredibly special, but to do it with a great group of teammates — there is nothing better. Winning MVP and top goaltender was just kind of gravy on top of it."

As part of his contract, Beukeboom also got the chance to coach the youth teams in Iceland, which he really enjoyed.

"I got to be head goalie instructor for the club, which went all the way down to young kids," he said. "I've done coaching here and there before but this was a cool opportunity to work with kids for a whole season and see how they progress."

Beukeboom plans to return to Sundre in the summer to train and play whenever possible and work as well. He is also hoping to return to coach a goalie clinic in Sundre over the Christmas holidays again.

As far as next season goes, Beukeboom is hoping to play elsewhere in Europe and keep moving up and playing the best hockey he can.

"Also, it's beginning to be a bit of an adventure for me — living and travelling around Europe," he said. "So I'm going to do my best to take advantage of that."