Moving players on to university attracts other good players, coach says
Jul 19, 2020 6:00 AM By: Doug Collie 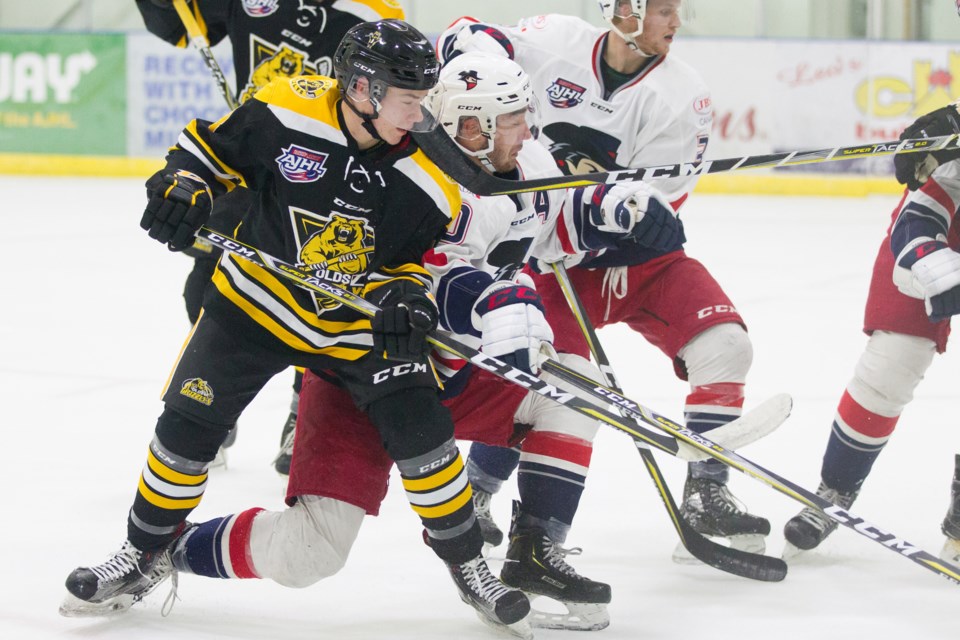 Former Olds Grizzlys defenceman Joel Shoemaker fights for the puck during a game against the Brooks Bandits at the Olds Sportsplex. Shoemaker, 19, has committed to play for the Salve Regina University Seahawks in Rhode Island for the 2020-21 season. The Seahawks are part of the NCAA (National Collegiate Athletic Association). File photo/MVP Staff

OLDS — The decision by Olds Grizzlys defenceman Joel Shoemaker to sign with a U.S. university team opens up a hole on the team’s roster, but that’s just part of life in junior hockey, says Grizzlys head coach Scott Atkinson.

Shoemaker committed late last month to play for the Salve Regina University Seahawks for the 2020-21 season, even though he’s only 19. Junior hockey players can play until age 20. That university is in Rhode Island. The Seakhawks are part of the National Collegiate Athletic Association.

Shoemaker will be missed. He played defence for the Grizzlys for two years and was named the team’s top for both seasons.

In Rhode Island, Shoemaker will see a familiar face. Former Grizzlys goaltender Duncan Hughes has also committed to the team. He played for the Grizzlys for three seasons. That move was announced earlier.

Atkinson said the departure of Shoemaker and Hughes is actually a good thing for the Grizzlys.

“They’re going a little bit earlier than they normally would, but in my mind, that’s going to be very helpful to our program when we move players on,” he said in an interview.

“Those guys moving on means a lot more to our program than being here and not ending up getting anything. That’s one of the major challenges we face here.

“We have to demonstrate to the incoming players that we can push guys on, that we have the connections and we have the ability to develop players so they’re of interest to teams at the next level.

“So that’s the biggest trick at this level – don’t get caught up in winning and losing. Get caught up in developing players and moving them on and then you’ll win as a consequence of that.”

Atkinson noted that like any other junior hockey team, players constantly join the team and age out, so the Grizzlys are constantly recruiting players to bolster their roster.

Thus, the loss of Shoemaker and Duncan is just part of the natural order of things.

“I think Joel was ready to go in terms of wanting to go to school and still play hockey. But the school part was something he wanted to get going with, much like Duncan Hughes,” he said.

“It’s just a recruitment thing. Obviously we’re recruiting players continually, and so it just means that there’s two slots now and we have to fill those and we’re in the process (of doing that).”

COVID-19 makes hockey season a challenge
Aug 2, 2020 9:00 AM
Comments
We welcome your feedback and encourage you to share your thoughts. We ask that you be respectful of others and their points of view, refrain from personal attacks and stay on topic. To learn about our commenting policies and how we moderate, please read our Community Guidelines.