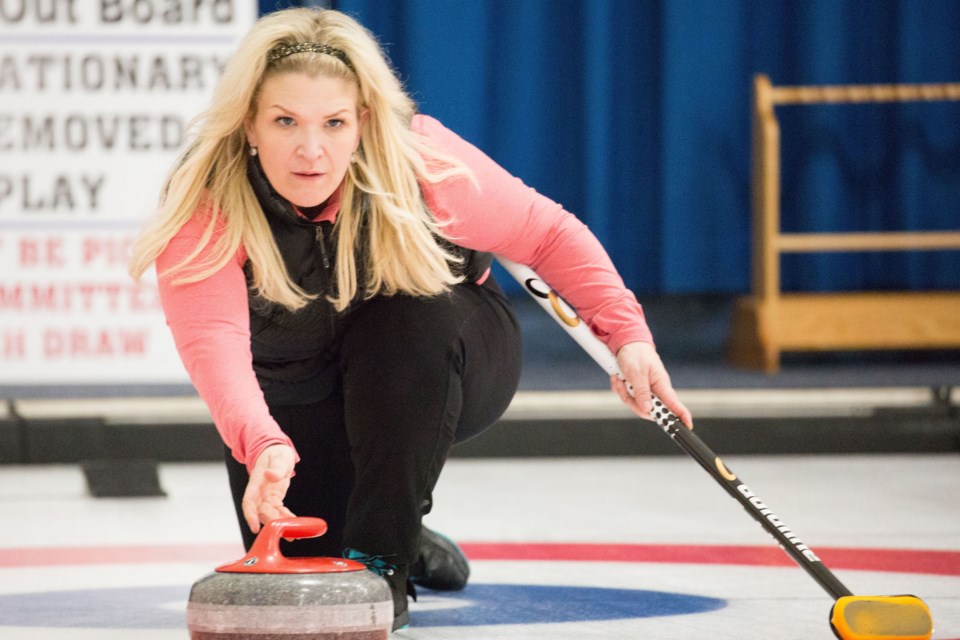 Jody Carrington throws a rock during competition at the Olds Curling Club during the 2019-20 season. File photo/MVP Staff

OLDS — The Olds Curling Club is ready to begin a new season, but it will be a different one.

They have made changes and have set up new rules in keeping with COVID-19 protocols, president Jennifer Lutz says.

Online registration for the club’s 2020-2021 began on Monday Sept. 28.  A two-hour in-person registration will also be held Oct. 8 at the curling club from 4 p.m. until 6:30 p.m. when its annual general meeting begins. New members are welcome.

Leagues will be offered for men and ladies in seniors as well as open and mixed categories.

A youth program will also be offered for those aged 7 to 18.

The club is still working on plans to host the provincial mixed qualifier, currently slated to run Feb 25-28.

They also still plan to host the Humpty’s Champions Cup tournament slated to run April 28-May 2.

That event, part of the Pinty’s Grand Slam of Curling, was supposed to be held last spring but was postponed, due to the COVID-19 pandemic.

The purpose of those guidelines is to reduce the number of shared touch surfaces and ensure that social distancing is practised during games.

“We’re doing a kind of staged approach,” Lutz said during an interview.

“For the first stage, we can’t open our kitchen and bar to the Sportsplex entrance so if there are COVID cases, we are keeping our facility separate. That’ll help with contract tracing and just is another layer of protection.”

Normally, the club loans out equipment. It will do so again, but with some changes.

“This year what we’re going to do is you can sign it out for the year, but you keep it with you and you’re responsible to clean it,” Lutz said.

“If you bring it back in safe condition, well we’ll refund you, type of thing. But we can’t just have open curling stuff to share.”

Scoreboards have been changed too.

“We’re not touching the same numbers to put up scores. We’re using dry-erase,” she said.

Lutz said the club has also hired more janitorial staff because the facility has to be cleaned every two hours.

“(That’s) part of our guidelines – and we’re asking people to clean their own rocks,” she added.

Lutz admitted paying for that extra janitorial staff will be a tough hit to the club’s bottom line, but it had to be done.

“We actually thought we’re going to lose money if we’re open or we’ll lose money if we close, so we might as well offer people a chance to get out and do something healthy and fun,” she said.

“Really it’s a tough situation, but we’ve spent a lot of time trying to figure out how to make it go.”

That said, Lutz is amazed and pleased with the support the club has received from the business community, despite the fact that COVID-19 has hurt their income.

She noted they sell sponsor boards, adding income from those sponsorships can “make or break” the club.

“We’re probably close to $20,000 in business sponsorship that we thought we wouldn’t even ask (for) this year,” Lutz said.

“I know businesses are hurting, but they were still super great in supporting our club with their signage, so that was really awesome.”

The hope is the club will be able to stage men’s and ladies championships later in the season as in previous years, but that remains to be seen.

“That is the plan, so we’ll see how the season ends out,” Lutz said.

“We just want to stay open – stay open and not go broke,” she added with a laugh.