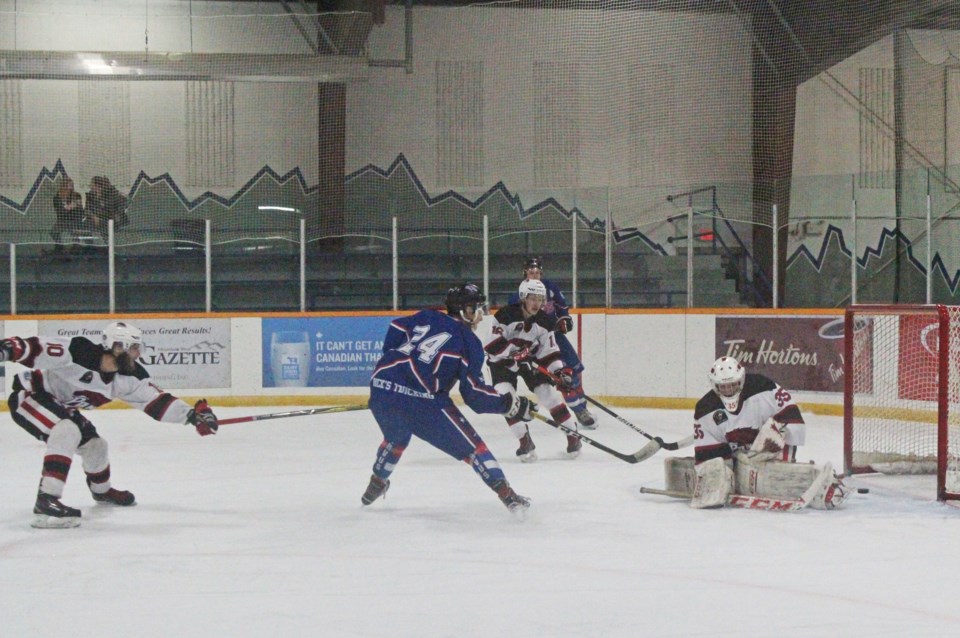 Carter Layden of the Mountain View Colts scores on a breakaway to give the Colts a 2-0 lead at home against the Ponoka Stampeders Nov. 16. Craig Lindsay/MVP Staff

DIDSBURY - The Colts lost both games this weekend.

The team was on the road Friday as they took on the Rocky Rams in Rocky Mountain House. The Rams won the game 3-2.

The Colts returned to Didsbury on Saturday to face the Coaldale Copperheads at at the Didsbury Memorial Complex. The Copperheads won the game 4-2.

It was a big swing for the Mountain View Colts last weekend during their homestand.

On Nov. 15, the Colts took it on the chin falling 9-1 against undefeated Okotoks but came back to beat Ponoka the following night 7-3.

The Colts had a decent first period against the South Division leading Okotoks Bison. Bryce Gray tied the game up at 4:22 of the first period after Tyson Laduke opened up scoring. Connor Taylor then put the visitors up 2-1 with less than a minute left in the first period.

After that, it was a feast for the Bison as they scored four goals in the second and another three in the third for the 9-1 victory.

"We had a good first period but had a few things go wrong in the second," said Olsen. "It just snowballed. When the snowball finally quit rolling it was beyond control."

Saturday, Nov. 16 saw a much stronger effort from the Colts as they took a 3-0 lead in the first on goals by Josh Gette, Carter Layden and captain Alan Klinck. Bailey Nesbitt and Kieran Bulloch scored to bring the Stamps to within one, 3-2 early in the second.

Mitch Visser put the Colts up 4-2 with a power-play marker midway through the second period. Tyrone Potts Jr. scored shortly after for Ponoka making it 4-3.

Travis Gerrard and Paton Rothenbusch scored for Mountain View to put them up 6-3 heading into the third. Gette scored the only goal of the third period, his second of the game, to clinch the 7-3 win for the Colts.

Olsen said it was good to see the team bounce back to defeat Ponoka Saturday.

"We played a lot better; much more as a team," he said. "We changed some things up; changed up the lines. The boys, I think, were a little embarassed with their performance on Friday and definitely weren't going to let that happen again."