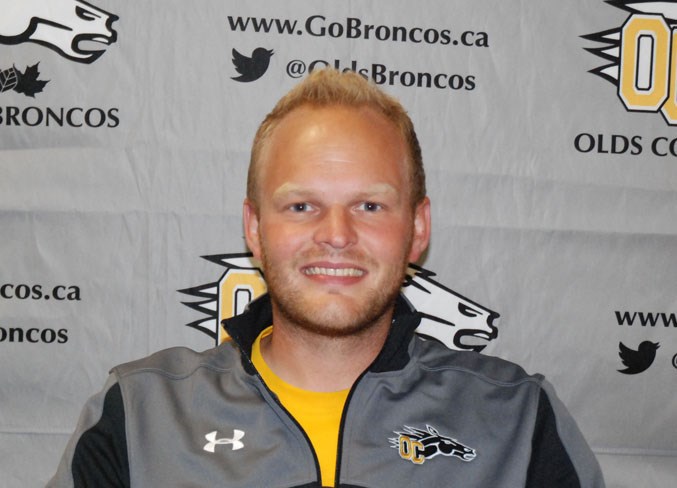 Niels Slotboom, head coach of the Olds College men's and women's soccer and futsal teams, says it will be a challenge to adapt to changes to the seasons introduced this year by the Alberta Colleges Athletic Association as a result of COVID-19 protocols. File photo

OLDS — The COVID-19 pandemic has disrupted the calendar for Olds College student athletes who had planned on playing several sports this fall.

Winter sports like basketball, volleyball, women's hockey, curling, futsal and badminton will be played as well, but won’t start now until January.

In an email, Radcliffe said rodeo athletes are expected to return to campus prior to Oct. 31 to resume training for winter and spring season rodeos.

"Our student-athletes were disappointed with the cancellation of the fall semester of play but have responded so positively since the announcement, continuing their off-season training and committing to returning to Olds College to train in the fall,” Radcliffe wrote.

“Our coaches have done a tremendous job with continuing to engage both returning student-athletes and incoming recruits through virtual team meetings and conditioning sessions.

“We have committed to honouring athletic scholarships for the fall semester for our student-athletes which will provide the opportunity for them to still be able to move to Olds, even if their programs are online, so that they can continue their athletic training while being able to put more focus on their academics."

Head soccer coach Niels Slotboom says the change in the season will be a challenge.

“Well, I mean, it changes our entire season around of course,” he said during an interview.

Normally, they play soccer in the fall and futsal (indoor soccer) during the winter semester. This year, that will be reversed.

“Often we start off and everybody gets to know each other during soccer and then during futsal we really start seeing the benefits of having players train together for several months and really getting to know each other. Now that’s going to be flipped,” he said.

“So it’s going to be very interesting for me to see how that works out in a team environment. We’re starting off with futsal in the competition format and then going into soccer instead of the other way around, so that’ll be a very interesting part of it as well.”

Each year, the team recruits several players from out of country. COVID-19 protocols are also making that challenging.

“We have some of our players who have stayed in Canada and that shouldn’t be an issue. But the ones who did go home, we’re still trying to get clarification on how that is going to work and when they’re allowed to come back in and what needs to be in place for them to do so,” he said.

"I had recruited two international students: one from Brazil, Matheus Franca; and one from Turkey, Goktan Celik. But we are still waiting to see if they can get their study permits to attend Olds College in person," Marsden wrote in an email.

Next summer break could be a lot shorter for the soccer teams, because they’ll likely be playing well beyond April, after college classes are over. Then if all goes back to normal, they’ll be gearing up for a regular soccer season again that fall.

Marsden's team will have the opposite situation: a longer preseason than usual.

"It gives us lots of time to work on individual skills and team systems," he wrote.

Last season, the women finished third in the regular season but lost in the playoffs. The men finished fourth, just a few points out of qualifying for post-season play.

There are a total of seven teams in both the men’s and women’s south divisions.

Olds resident Jenna Kardos is a member of the women’s soccer team. This will be her last year on the team, as she’s in a two-year program (sports management).

She said the ACAC’s decision to move the seasons will be unusual -- and yet not so unusual -- for her.

“I was expecting soccer in the fall and I was training for that. But with it being in the spring it’s kind of like when I was growing up; soccer was always in the spring. So I guess it’s not that much different,” Kardos said.

“I think we’ll just keep working hard and plan for the season that we’ll get and see what happens. It’s been, like, really uncertain times, right?

"So (we’ve) just got to go with the flow and see if we can get soccer going again. But we just have to wait for now."

She’s not sure yet if she’d continue playing soccer at the university level.

Olds and Innisfail gridironers square off
Sep 18, 2020 3:00 PM
Comments
We welcome your feedback and encourage you to share your thoughts. We ask that you be respectful of others and their points of view, refrain from personal attacks and stay on topic. To learn about our commenting policies and how we moderate, please read our Community Guidelines.