Broncos fall to NAIT during Pink in Rink game 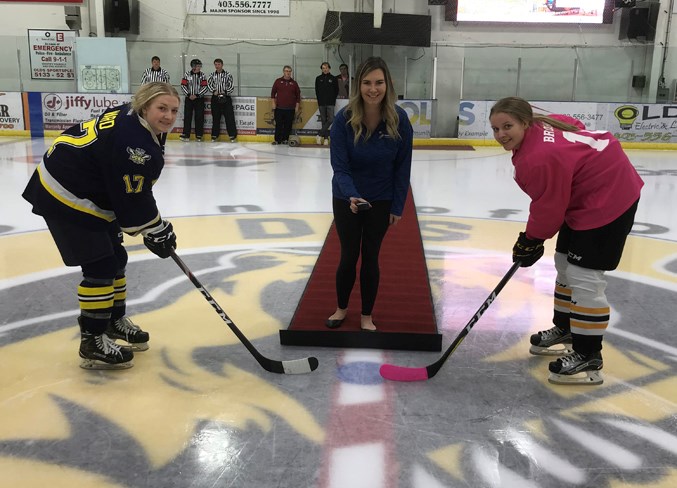 Alberta Cancer Foundation development officer Michelle Body drops the ceremonial puck between Kali Cummings of the Olds Broncos and Brittney Savard of the NAIT Ooks during the Pink In The Rink cancer fundraiser Oct. 17 at the Sportsplex.

The Olds College Broncos women’s hockey team lost 3-1 to the NAIT Ooks in the “Pink in the Rink” game Thursday, Oct. 17 at the Olds Sportsplex.

The Broncos were pleased that representatives of the Alberta Cancer Foundation (ACF) had a booth during the game. Proceeds from several activities went directly to the ACF.

Neither team was able to take momentum in the game early, as both teams took turns taking shots on goal but Broncos goalie Lexi Bruce and Ooks goalie Kaitlyn Slator were able to keep the teams at bay.

At 3:34 of the first frame, the Ooks broke the deadlock when Bre Martin intercepted a pass at the Broncos blueline, split the Olds defenders and put a puck past Bruce for an unassisted marker.

Shots after the first period were 7-6 for NAIT.

The second period was much like the first with both teams taking turns getting shots, but none were strong opportunities until the dying minutes of the period when both teams had strong rushes that were thwarted by Bruce and Slator.

With 1:17 left in the period the first power play of the game went to NAIT as the Broncos' Kassy Gaudette took a checking penalty. The Ooks returned the favour when Michaella Kibblewhit took a double minor penalty for checking to the head.

Shots after the second period were 17-11 for NAIT.

Shortly after the third period started the Broncos went on their first power play of the game and capitalized with a goal from Maddy Black, assisted by Kassy Tiringer. Tiringer chipped the puck away from a NAIT forechecker who was entering the Broncos zone. Black took it, skated the puck up the ice and shot it through a NAIT defender and past Slator.

Moments later the Ooks regained the lead when Cass Lyttle scored off an assist from Natsumi Sugimoto. With 7:35 left in the third NAIT took another penalty; this time Treasure Posch for hooking.

With six seconds left in the game Hannah Piket scored an empty net goal to give NAIT a 3-1 win.