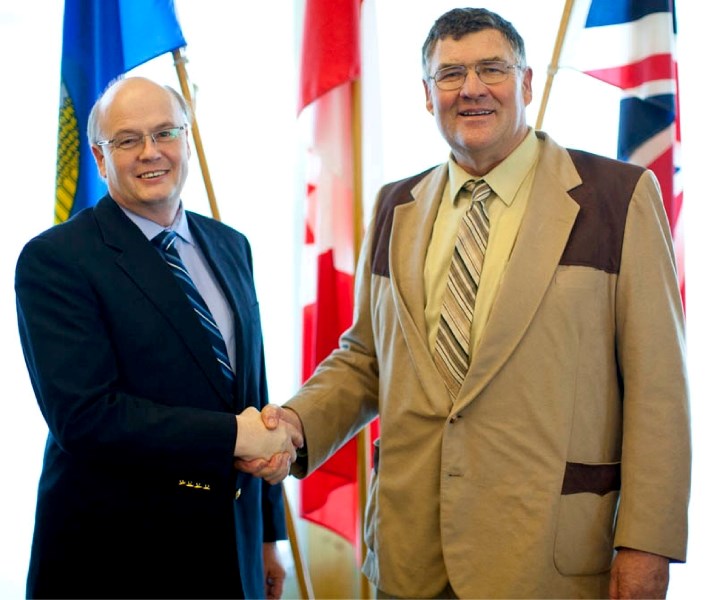 Mountain View County has hired its top administrator from within.At a special council meeting last Tuesday, Tony Martens was appointed chief administrative officer in a unanimous vote.The soft-spoken director of legislative and community services was named interim CAO in late October following the termination of Doug Plamping by the newly elected council.Martens, 54, is a veteran administrator with almost 34 years of municipal experience, 24 of them at MVC. Originally hired as assistant commissioner, Martens later served as planning and development officer and in other administrative capacities, including a previous stint as interim CAO.Calling Martens ìthe obvious choiceî for the CAO position, Reeve Paddy Munro said the county had received 35 applications from qualified candidates since December, with council's selection committee narrowing that down to four ìhighly skilled CAOsî currently working in Alberta.ìIt was an absolute pleasure to sit down with all of them and we were left with a very tough decision to make,î Munro said at Tuesday's meeting. ìWe decided on one individual with three decades of experience in municipal government, all of it in rural Alberta, and we believe the man is the right person for the job.ìI am so pleased to announce that Tony Martens has accepted the position of chief administrative officer, effective immediately.îEach speaking in turn, councillors congratulated Martens on his appointment.KEVIN GOOD: ìIn my heart I know that your experience and your heartfelt concern for this county and for everyone that works here and for all the ratepayers is going to be appreciated. Thank you for accepting this position.îPATRICIA McKEAN: ìI am very thrilled about Tony receiving this position and accepting it. From his demonstration of the job he's been doing the last two months, I too believe that he has the best intentions of the county, the ratepayers and the staff here, and he's going to do a wonderful job. I'm really happy.îDUNCAN MILNE: ìI agree with everything that's been said and I appreciated the way you put your efforts into being the interim CAO and I look forward to working with you as the new CAO of Mountain View County.îBOB ORR: ìI am excited that you accepted the position. I feel that you ARE the best man for the job and I really appreciate your open-door policy. We've had lots of good discussions and I think the county is going to benefit tremendously.îBRUCE BEATTIE: ìI see this as our first step towards bringing the county of Mountain View back to a position of leadership and respect in the province and I'm looking forward to that process over the coming years. And also, I just want to say how proud I am to be part of a council that has come together and agreed unanimously to this appointment. I think that bodes really well for this next few years for the county and for ratepayers and for all our staff.îAL KEMMERE: ìI've worked with Tony for the last six, seven years and Tony has always been up to the task of the job that's been put in front of him. I have full confidence that he'll meet the new challenges that come along with this new career shift and, much like the rest, I look forward to working with him as a councillor and as an individual.îIn response, Martens thanked council for its demonstration of confidence.ìI am truly honoured to serve in this position, to serve council, but more importantly to serve all the residents of Mountain View County,î Martens said.ìI look forward to the next few years ñ I know there's great things ahead for Mountain View County and it's going to be great.îMartens, a certified local government manager, received his education at the University of Alberta and spent his first decade in municipal government service at Warner County, south of Lethbridge, first as an accountant and then as assistant manager. A native of southern Alberta, Martens and his wife Donna have four children and two grandchildren.