As 1986’s largest gas field discovery in Alberta in the preceding decades nears depletion, the Caroline-area complex built to process its sour gas will be shifting gears.
Oct 3, 2018 9:11 AM By: Lea Smaldon 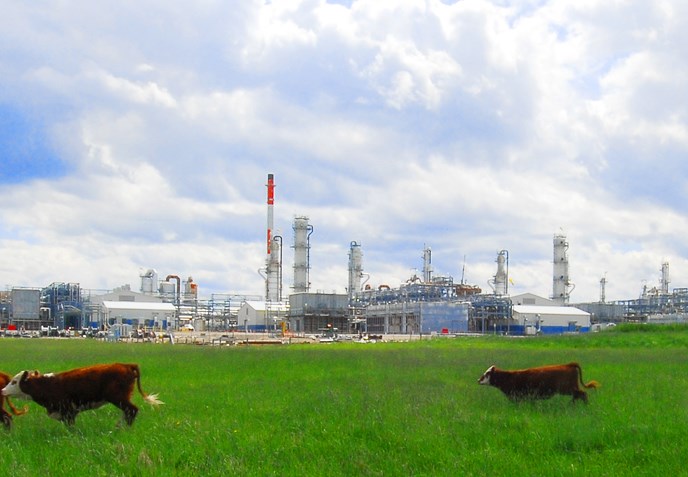 The Shell Caroline Complex has been in operation for 25 years.

As 1986’s largest gas field discovery in Alberta in the preceding decades nears depletion, the Caroline-area complex built to process its sour gas will be shifting gears.

The company is growing its Rocky Mountain House play, which will instead provide sweet gas to the Caroline Complex, said Mark Weiss.

“While this will change the dynamics of the plant significantly, it will allow us to remain a fixture in the community for decades to come,” he said.

A team of Shell’s geologists and geophysicists discovered the sour natural gas field in 1986. At the time, it was Alberta’s largest natural gas discovery in 20 years.

The Shell Caroline Complex began operating in 1993 to separate and process the sour natural gas.

Constructed over a period of 30 months at a cost of about $1 billion, today it is the newest, most technologically advanced of Shell’s three sour gas processing facilities in Western Canada.

Shell is the major owner and operator of the Caroline Complex which includes the gas field, 10 operating wells, two operating compressor stations, a major gas processing plant and a sulphur forming and storage facility.

Weiss said “it is a truly unique and special opportunity” to be celebrating the plant’s 25th anniversary in the community where he was raised.

“This will be a recognition of not only producing gas, but a celebration of true community involvement and collaboration over the past quarter century. Like the community in which it resides, the people are the strength and backbone of the Caroline organization and they are the reason why we have achieved this milestone,” he added.

Alice Murray, a recently retired Shell employee said she was very proud to be part of those 25 years “and witness the sincerity and integrity Shell exhibited in becoming a part of the community.”

The former community liaison of the Shell Caroline Complex was one of the founders of the Sundre Petroleum Operators Group (SPOG).

In 1992, SPOG was exclusively made up of industry members who were working together to provide efficiencies in emergency response plans within the Sundre area.

That year, a sweet gas transmission line explosion in the Caroline area caused concern amongst area residents and landowners. Communication between industry and stakeholders in the area was said to be extremely lacking.

Murray is said to have spearheaded the efforts to change the way that industry engaged with communities based on collaboration and inclusion. It fostered the approach of including the industry operators to become members of communities.

“The local jobs, the contributions to so many needs within our communities and the attitude of truly wanting to be a good neighbour has made you a very valued part of our community. Wishing you 25 more years of safe operations.”

Methane is shipped by pipeline to markets in Eastern Canada and the United States. It is used primarily for heating and electrical generation.

Butane is shipped to refineries where it is used as a gasoline blending component and to petrochemical plants for use as a feedstock.

Ethane is shipped by pipeline to petrochemical plants where it is used as a "building block" for a variety of chemicals and plastics.

Condensate is a petroleum liquid similar to unrefined gasoline. It is shipped by pipeline to refineries as a feedstock to convert crude oil into various finished petroleum products, or for use as a diluent that thins the heavy crude oil so that it will pump or move through a pipeline.

Sulphur is pipelined 41 kilometres to the Shantz Sulphur Forming facility where it is formed into pellets and transported by rail to Vancouver for shipment to international markets.

Sulphur is used to make a wide range of products from fertilizers to fabric to pharmaceuticals. Shell Canada is one of the largest independent marketers of sulphur in the world.

As it looks to the future of the Caroline plant, Shell is eyeing its assets in the Rocky Mountain House area.

Since late 2013, Shell has been pursuing the production of light tight oil, gas and liquids from the Duvernay play in an area around the town.

As of April 2017, Shell has 17 wells on-stream, averaging approximately 3,000 barrels of oil equivalent per day.

Estimates on sweet gas production -- what company officials say will eventually feed the Caroline plant -- have not been disclosed.

The plant's future and its past are being celebrated by current and former employees.

“Twenty-five years is a long time and we can all be proud of the growth we have shared as community builders and look forward to many more years sharing in shaping the minds and hearts of our youth,” said Randy Urlacher, Shell’s Waterton operations supervisor, who formerly worked at the Caroline plant.