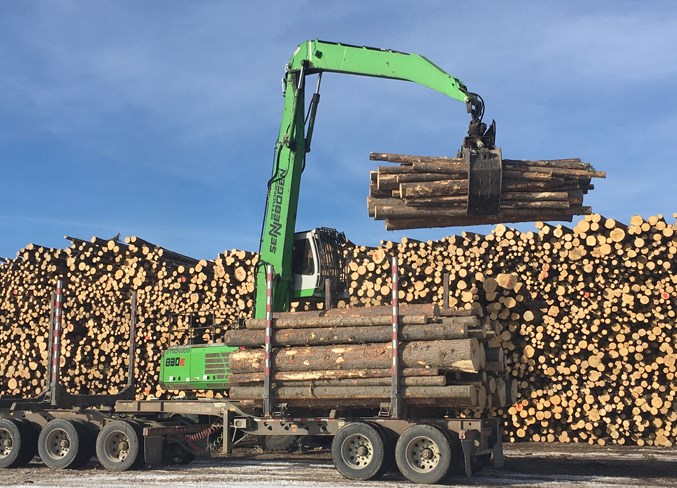 “Generally speaking, there’s no strategic plan for an increase” in production, harvest operations or hiring, said Bruce Alexander, general manager of West Fraser Sundre Forest Products, adding the forestry company for the time being plans to “mimic what we’ve been doing the last few years.”

That means continuing to run “full bore at two operating shifts a day throughout the week,” he said.

However, while the company always accepts resumes, staff turnover has been rather low and the reality is that there is no active hiring campaign at the moment or planned in the near future, he added.

A stable workforce is a positive thing — the company employs about 250 people — and there are no plans to curtail production, he said.

No major capital projects are on the docket either. But Alexander hopes the weather remains warm enough to get through what is called the seasonal “breakup” — when the ground becomes too soft to operate on in an environmentally safe way — on a regular time frame.

During that period, the company must pause until the frost thaws and the ground dries enough to enable operations to resume once again in the summer, he said.

“The mill keeps operating all the way through,” but “our woodland activities will slow down for breakup.”

The recent deep freeze caused by the polar vortex that created extremely cold conditions throughout most of February and early March undoubtedly helped reduce the number of mountain pine beetles that have been plaguing the Hinton area, but Alexander seemed cautiously reserved about getting overly optimistic.

“We still very much have an issue to be aware of and manage,” he said, adding the pests are unlikely to have been completely exterminated.

“Nobody will know until we can actually do some surveys to see if the larvae beneath the bark are alive or not.”

Cold snaps are more devastating to the pine beetles in November or April, as in between, the bugs have already had the chance to insulate themselves to get through the winter, he said.

“They have a hibernation cycle and a natural chemical to protect them,” he said, adding snow cover also provides insulation.

“I’ll take cold weather — it’s not like it’s not helpful. But did it eliminate the problem? I suspect not.”

As for the controversial Bighorn Country proposal, Alexander said Sundre Forest Products has been in dialogue with stakeholders and government.

“We’re trying to completely understand what the proposal means,” he said, expressing the opinion that there are “more questions than answers at this point.”

Under the impression the consultation process will continue to move forward, Alexander said he hoped more details would be coming to light.

The forestry industry also remains firm in its position that the U.S. administration’s tariffs, which are seeing all Canadian lumber exports taxed, are not justified.

Although the softwood lumber deal continues to grind along, it has been a quiet file recently with other trade issues that have arisen. But the industry intends to continue supporting federal and provincial governments as officials work through trade negotiations, he said.

“We determine where we’re going to be harvesting for the next 20 years,” said Daniels.

“We follow that plan unless we come up with things that need to change.”

For example, a major forest fire or a powerful windstorm felling many trees could prompt an unexpected change in said plans to determine what could be salvaged before the wood begins to rot, he added.

Attempts to salvage in such situations also depend on whether there are roads to provide access to the impacted area, or whether any roads can be built. Leaving fallen trees is not an option as dead trees littering the forest floor impedes the growth of future trees, he said.

“We want to make sure there’s forest growing," he said.

That represents a costly approach, as there is no short-term economic value since a forest can take as long as 100 years to regrow. But “if we weren’t doing that, the forest would be quite a bit different,” he said.

Meanwhile, there also remains the pervasive problem of the mountain pine beetle, with monitoring efforts ongoing to determine where the beetles are likely to spread, he said, adding trees that have been identified as infested also need to be harvested before rotting.

Additionally, another pest — the spruce beetle — has begun to appear on the radar. As the bug’s name implies, the insect impacts specifically spruce trees, which has been a problem in B.C. and elsewhere in Canada, but not as much in Alberta, yet, he said.

Looking ahead, Daniels said Sundre Forest Products is working out the details to, once the weather improves, make available tours to bring people out to see operations.

“We’re going to be doing some more public engagement. It’s important to get community members out to see what’s going on.”

That will provide an opportunity for people who have concerns about the industry and its operations to obtain a perspective from forest management professionals, he said.

Forestry is sometimes depicted in a negative light due to how a section of land looks following a harvest. But there is a careful approach to plan specifically in advance to ensure a long-term sustainable regrowth cycle, he said.