Scouts no more in Didsbury

DIDSBURY -- A couple of local former Scout leaders are planning a get-together for any former Didsbury Scouts in summer 2020.
Mar 12, 2019 6:43 AM By: Craig Lindsay 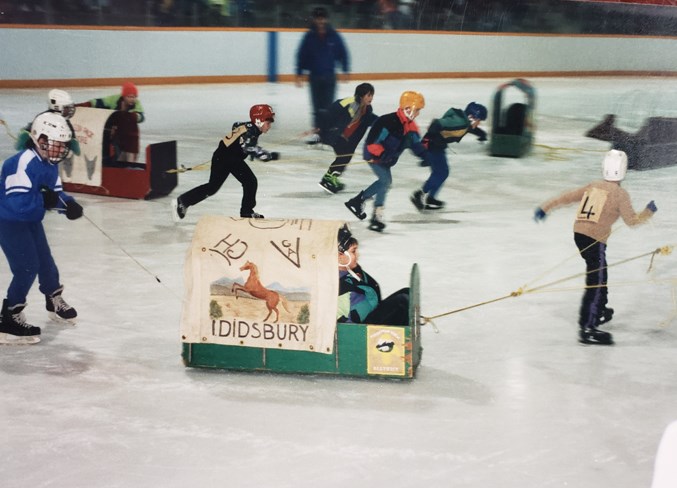 Youngsters take part in the Scouts Ice Stampede at the Didsbury Arena in 1993.

DIDSBURY -- A couple of local former Scout leaders are planning a get-together for any former Didsbury Scouts in summer 2020.

Sadly, the Scouts in Didsbury folded recently and much of the memorabilia that was kept at the Eldon Foote Hall (Didsbury Train Station) was given to the Didsbury Museum.

Lynn Samoisette and Grace Mullen were both involved with the local Scouts for 25-plus years. Both were sad to see the last of the Scout troops fold.

The two are planning what they are calling a "wake" from July 3-5, 2020 for former Didsbury Scouts and leaders.

"It's not a reunion because we're not doing anything anymore," said Samoisette. "It's a wake to remember everything -- all the good times we had."

Didsbury Scouts had been in Didsbury continuously since 1910. At one time there were three different troops in Didsbury alone.

"We had our 100-year anniversary in 2010," she said. "We had Beavers and Cubs here up until this fall. Scouts (age category) haven't gone for several years."

As for why Scouts folded in Didsbury and the surrounding area, the ladies just say that numbers were steadily declining.

"There was no youth involvement," she said. "No one enrolled. The leaders decided they didn't want to do it anymore. There was only one or two of us leaders left and no youth whatsoever."

Samoisette said that Didsbury and Carstairs combined last year for Beavers and Cubs, alternating between locations.

"When there are no kids, you can't have a program," she said. "It was a mutual decision (to shut down the program)."

Foote, a former Scout leader, donated the money to have the train station turned around and set up as a Scout hall.

The Scouts have since removed all their memorabilia from the hall and donated it to the Didsbury Museum, where it will be featured in an ongoing exhibit. The Town of Didsbury owns the train station building.

"We were kind of expecting it," said Samoisette of having to remove everything from the hall.

"We were disappointed too," said Mullen. "Everything like the Eldon Foote sign is all gone. He also donated all the money for all the fixtures, the tables and chairs, everything in there."

The ladies say there have been many great events and accomplishments throughout the years for the Didsbury Scouts.

"We used to have the ice stampede, which was like chuckwagon races on ice. That went on for many years. We used to collect Christmas trees and have a big fire with hotdogs. We had a haunted house for years."

Samoisette said she initially got involved with Scouts for her son as many do.

"My son wanted to be there," said Samoisette. "They said they needed a leader and it was only an hour a week. I said OK."

Samoisette stuck with it for a couple of decades because she enjoyed it so much.

"I enjoyed the kids and the program at the time," she said. "The camaraderie you got with all the other leaders and the kids throughout the years."

The program was a great benefit for her son, she said.

"It's a very good program," she said. "They got a lot of life skills. That was a big thing. They learned how to do community service. That was good."

Mullen said the kids learned how to get along with other kids and work with them.

"They had to learn their rights ended where someone else's began,"  said Mullen.