Delegates at last week's 2016 Ranching Opportunities conference at Olds College were urged to stress the positives when promoting the agriculture industry to domestic and international customers.
Feb 16, 2016 12:00 AM By: Dan Singleton 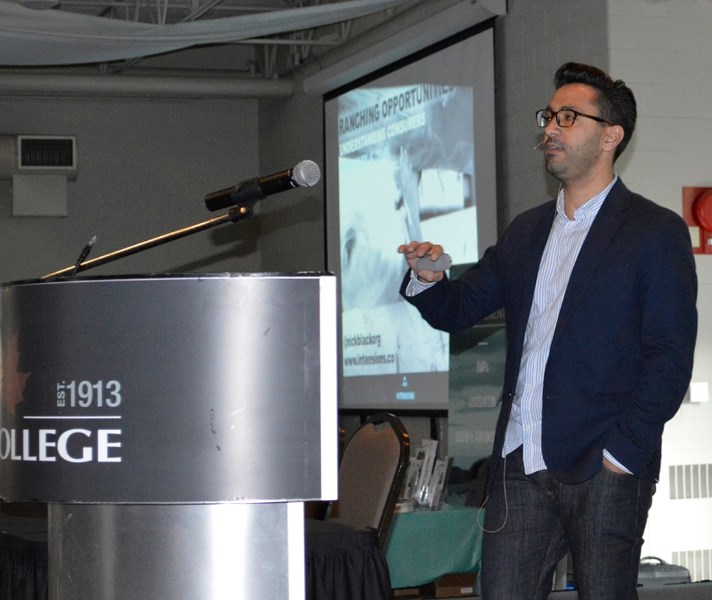 Nick Black speaks to delegates at the Ranching Opportunities conference at Olds College on Feb. 4.

Delegates at last week's 2016 Ranching Opportunities conference at Olds College were urged to stress the positives when promoting the agriculture industry to domestic and international customers.

Nick Black, the managing partner with Intentions Consulting, was one of the speakers at the one-day conference. He spoke about recent research into consumer attitudes about farm animal production, consumption and related issues.

“I think you need to start by working with the positives,” said Black. “It's very hard to go up against negative things, but what you can do is defend and continue to talk about the positives. These are your strengths. This is a huge opportunity for you guys to get involved and show them (consumers) what is going on.

“Take one of the myths and tackle them with honesty and transparency. Say, ‘we do care about the animal and we are following the best standard possible' and that is how you tackle these things.”

He called on Alberta farmers and ranchers to champion their industry with domestic and international customers.

One hundred and seventy people, including area producers and Olds College students and staff, attended the conference, which was held in the Alumni Centre and elsewhere on the college grounds on Feb. 4.

Black presented the findings of a recent survey of more than 700 Alberta residents aged between 15 and 69 in both rural and urban communities.

Forty-eight per cent of women respondents and 28 per cent of male respondents said they believed that consuming meat from farm animals treated with hormones and/or antibiotics is harmful to human health.

The survey found that when looking for information on farm animal health and welfare, 81 per cent of Albertans use search engines, 51 per cent use newspapers, 37 per cent use television, 16 per cent use YouTube, 12 per cent use Facebook, five per cent use Twitter, and four per cent consult farmers in person.

• Nationally and globally, there are significant strengths and positive perceptions of the Canadian ranching industry, creating an underlying sense of trust and positivity.

• Locally, Alberta residents who are younger (15 to 29) and/or female have the strongest negative beliefs about ranching practices.

• Individuals should be encouraged to get involved in promoting the positivity and transparency of the ranching industry.

Other presenters at the Ranching Opportunities conference included Steven Kenyon, who spoke about low risk ranching; Curt Pate, who gave a cattle handling demonstration; Brad McLeod, the program manger at the National Meat Training Centre at Olds College, who spoke about beef grading; and Ben Wilson, who spoke about the FarmOn online community of more than 15,000 people “passionate about building a better future for the next generation of farmers.”

Forage and livestock business specialist Grant Lastiwka from Alberta Agriculture in Olds was also on the panel.