Plans by Central Alberta Co-op to build a new fertilizer plant outside of Innisfail have ground to a halt due to a dispute with Red Deer County over road improvement costs.
Aug 30, 2011 1:00 AM By: Mountain View Today Staff 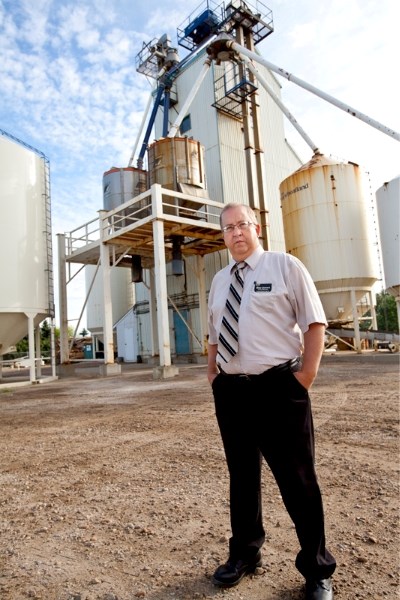 Plans by Central Alberta Co-op to build a new fertilizer plant outside of Innisfail have ground to a halt due to a dispute with Red Deer County over road improvement costs.At issue is a development condition that will require the Co-op to enter into a road use agreement with the county to pay the full cost of paving a 0.8-kilometre section of Rge. Rd. 282 from Hwy. 590 to the current plant before a development permit will be issued.The plant, Green Way Farm Supply, has been in operation at its current location for over a quarter-century. It has been owned by the Co-op since 2008. Once a new plant is operational on the site, an existing plant located in Innisfail and the original on-site plant will be shut down.Mike Clement, Central Alberta Co-op's general manager, said while the cost of paving the road hasn't been priced out yet, early estimates peg the cost at between $700,000 and $1 million. Requiring the Co-op to cover the entire cost would make building a new fertilizer plant unfeasible, Clement added.ìWe wouldn't be able to do it. It adds 34 per cent to the cost of the project,î he said, adding that on Aug. 17 the Co-op appealed the Aug. 2 decision of the Municipal Planning Commission. The appeal will be heard by the county's development appeal board within 30 days of the filing date.County manager Curtis Herzberg said the county's staff is looking at some recent road tenders to come up with a final cost for the improvements.ìMy engineers are digging into those costs on that as we speak,î he said last Thursday. ìThat's a ballpark ñ it's probably not way off.îClement said the current facility is utilized by about 300 farmers from across Red Deer County. If there is no agreement in place by mid-September the new $1.9-million plant will be put on hold indefinitely. The current plant, which has a two-year life expectancy, would slowly close down and move to a new location elsewhere, Clement added.ìThis will directly affect every one of them (the farmers) if we don't build,î he said, adding that in order for the plant to be feasible the Co-op is working on extremely tight deadlines. The goal was to have the plant operational by March, 2012. ìWe were hoping we'd already be pouring cement in September.îThe Co-op has asked the county to examine paying for the road upgrades through an off-site levy similar to the one used for improvements to Galloway Road last year. In that case, Red Deer County introduced a levy of $875 per acre on future developments to cover the $662,637.75 cost of chipsealing Galloway Road to the RCMP Police Dog Service Training Centre.ìWe agree the road needs to be upgraded,î said Clement. ìWe want to work with the county to come up with a solution.îDuring the Aug. 2 meeting Coun. Don Nesbitt said requiring Co-op to cover the entire cost of the road improvements was simply ìthe cost of doing business.î Late last week he said he was not opposed to introducing an off-site levy in the area provided it was an option available to councillors. Herzberg confirmed that it was, even though there is no area structure plan in place.ìIf there's a way of doing it fairly without the taxpayer carrying the brunt of it then I could perhaps be swayed to support it,î Nesbitt said. ìI just don't want to see the taxpayer paying the burden of paving that road, but there may be a way around it.îNesbitt said he expects council to discuss ways to accommodate the Co-op's development at the next MPC meeting on Sept. 6.Mayor Jim Wood said the county is working to determine the actual cost of the proposed road improvements, but would be willing to work with the Co-op to ensure any decision is fair. Wood said there are various ways for council to proceed, including introducing a levy or reducing the contribution Co-op will be required to make.ìRight now we're saying it's 100 per cent. We may take a look at this and that number may be changed if council so wishes. It may come down to what is a fair contribution.î