The two small wooden grain elevators at Niobe in Red Deer County will soon have gigantic company. A huge high throughput grain terminal operation along Highway 2A, two kilometres north of Innisfail, was approved by the county last week (Feb.
Feb 23, 2016 12:00 AM By: Johnnie Bachusky 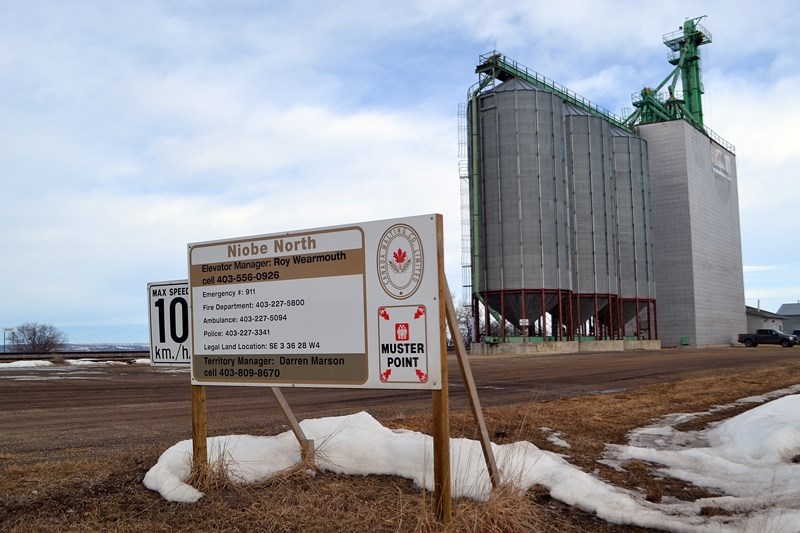 The new massive grain terminal at Niobe that was approved by Red Deer County last week will be built across the rail track to the west of the existing north elevator.

A huge high throughput grain terminal operation along Highway 2A, two kilometres north of Innisfail, was approved by the county last week (Feb. 16) through a development permit application by GrainsConnect Canada Operations Inc.

The facility is the first-ever high throughput grain terminal operation in Red Deer County. It is expected to cost between $30 and $40 million to construct, and will spread over more than 207 acres and process up to 35,000 metric tonnes of grain in 10 hours from 10 massive concrete towers.

More importantly, the project, expected to open for business in time for the harvest of 2017, will have an enormous immediate positive economic impact for the county and its farming community.

“This is a real milestone, a real game changer for the farming community for sure. This is going to be one of the largest facilities that I am aware of,” said county mayor Jim Wood, a farmer himself.

“It is not only going to bring in tax revenue to Red Deer County, but it is also going to help farmers in the county and around to market their grain,” he added. “It is definitely going to create employment, definitely in a time during a downturn in the economy. We are definitely going to see some jobs created right now.”

GrainsConnect, a joint venture between the Australian-based GrainCorp Limited and Japanese-based Zen-Noh Grain Corporation, announced last December that it was creating a new fully integrated supply chain for Canadian farmers, an investment that would include construction of several new elevator operations in Alberta and Saskatchewan. The Western Canadian Wheat Growers Association said GrainsConnect's initiative would allow farmers to move more grain off the farm at harvest time, strengthen grain bids, and improve export capacity.

In addition to the new site at Niobe, Warren Stow, president of GrainsConnect Canada, said the company hopes to announce the location of a second new Alberta grain terminal facility, along with two in Saskatchewan, within the next 60 days.

For farmers in the Red Deer County region, it will mean they will no longer have to haul their grain to the current closest terminals in Olds, Lacombe, Joffre, or farther east at Equity and Trochu.

“Obviously we think having another option for local growers is a positive thing; proximity is obviously one benefit. Just having another option other than the incumbents that have been in the industry for a number of years we feel brings a value,” said Stow, whose company owns the two wooden grain elevators at Niobe that have operated for several years under the Canada Malting Co. banner.

“We feel we already have a good presence with the local community, and the growers in that community. There is a strong production base. We felt it was a strong location for us.”

He said the two wooden elevators, which employ a total of six workers to store barley for shipments to Calgary, will remain at the site.

“They are for purpose for our malting business and we see those operating as we do today. There will be no change,” he said, noting the new facility, designed to handle wheat, barley, canola and peas, will be built across the rail track to the west of the existing north elevator.

GrainsConnect's application to the county's Municipal Planning Commission noted the facility, which will be accessed off Highway 2A from Twp. Rd. 360, will also include support buildings, a weigh scale, seed cleaning units, parking stalls, and a 2,652-metre loop rail track from the existing CP rail line.

Stow said he hopes construction of the facility can begin in April but noted there are still additional regulatory approvals that need to be finalized.

“We do have some hoops to jump through. Obviously the development permit is one of them that we cleared this morning (Feb. 16), but we do have provincial (approval) because we are a foreign entity, and we do need to seek foreign investment approval from the provincial government,” he said, adding there are other foreign approvals that have to be made.

However, when construction does start it promises to give an immediate boost for the struggling local economy, as the 18-month build period will give steady employment to 40 to 50 construction workers, and up to a maximum of 200 when the concrete slip is being poured continuously, 24 hours a day, over a period of up to six weeks.

Stow said when the facility is open for business in time for the harvest of 2017, 10 to 12 full-time people will be permanently on site to operate the facility.