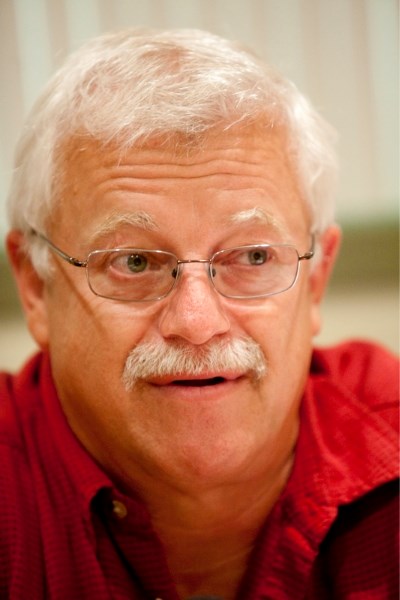 Kemmere: Taking it to another level.

Veteran Mountain View County councillor and former reeve Al Kemmere took the big plunge last week, announcing his candidacy for the Progressive Conservative nomination in Olds-Didsbury-Three Hills.ìI believe in the PC party and its values,î Kemmere said Thursday after announcing his intentions to a group of business people at a breakfast meeting in Olds.ìThe potential opposition have some good points, but the PC way is the way I would like to represent this area and bring it back to the grassroots.îKemmere (pronounced KEM-er-EE) said the impending retirement of MLA Richard Marz afforded him an opportunity to build on his experience on council and regional organizations ìand take it to another level of government to try to serve the people in the area.îHe doesn't see himself as replacing Marz, he added: ìI look at it as a new person coming in to do the job of PC MLA. To help this area it needs to be represented and that will be my job ñ to represent the area in government.îKemmere stressed, however, that he will push for the government to adopt ìa grassroots type of approach,î rather than operate by cabinet decision.In a statement announcing his candidacy, Kemmere defines the grassroots approach as ìtwo-way communication and collaboration.îìCommunication and collaboration are two of my key strengths,î he says. ìOver the last 30-plus years I have worked with various local agriculture boards and organizations (and) together we have created new innovative marketing plans, developed an export market for cattle and embryos, built a new Co-op grocery store in Carstairs, provided a very successful and fun hockey team and worked to expand our church, all with a focus to help build better organizations.îAs reeve and councillor, he has been involved with the Municipal Area Partnership, Central Alberta Economic Partnership, Olds Institute for Regional Development, MVC agricultural services board, Mountain View Regional Waste Commission and the Community Learning Campus at Olds College. He has also played active roles in municipal associations at both the provincial and national levels.ìWhen we work together to share resources, expertise and knowledge with our partners, the joint effort makes our entire region stronger, our quality of life better,î Kemmere says, summing up his approach to regional politics.Kemmere, 54, said he learned the value of a ìteam approachî during his almost seven years on council, and despite the election of a new council and reeve last October after a campaign that targeted the previous council's record, he said he has nevertheless ìbeen able to stick to my core values, my core beliefsî on council.ìI still have done what I believe is best for Mountain View County.îNo date has been set for the Olds-Didsbury-Three Hills nomination meeting. It will be called after the party leadership is decided, likely after the second ballot on Oct. 1, and members say they expect it will take place in late October or early November.Kemmere said if he wins the nomination he would take a leave of absence from council after the writ is dropped for the next provincial election. That could be spring of 2012 or even 2013, he noted.If he does make the leap from council to the provincial legislature, Kemmere said he doesn't feel he would be leaving the county in the lurch.ìThey will survive without me. Council is in a rapid learning curve.îOn the leadership race, ìI'm torn between two and I'll leave it at that,î he said. ìIt's not an easy choice.îLast Thursday's breakfast meeting was the first in what will be a series of outreach efforts, Kemmere said, with a second meeting, this time with a group of area farmers, set up for this week. Youth supporters are also setting up a website for the campaign.ìWe are going to use whatever we can so we can gather information from young people.îKemmere's announcement comes almost two months after Carstairs accountant William Stevenson was first out of the gate declaring his intentions to seek the PC nomination.Contacted last week, Stevenson said he was not surprised to hear that Kemmere had entered the race.ìI fully expected him to be in the race and I expect he'll bring a lot of Olds people into the party to support him,î Stevenson said, adding that it's healthy for the party to have a contest, contrasting that with the Wildrose party which acclaimed its candidate for the riding.Stevenson, 40, said he expects at least two more people to step forward.Despite Kemmere's high profile in local politics, Stevenson doesn't see the contest ìas a David and Goliath thing at all,î he said.ìWe are coming from completely different angles, him being a farmer and then reeve Ö and me being a small business person and accountant, and I've been involved in helping out MPs and MLAs for 20 years.îThe Wildrose candidate for the riding, Beiseker mayor Bruce Rowe, could not be reached for comment by press time.