Whenever Rowley has faced oblivion from the ghosts locals have always come up with a plan, sometimes mischievous, to save their dusty locale on the Central Alberta prairie.
0
Dec 13, 2016 12:00 AM By: Johnnie Bachusky 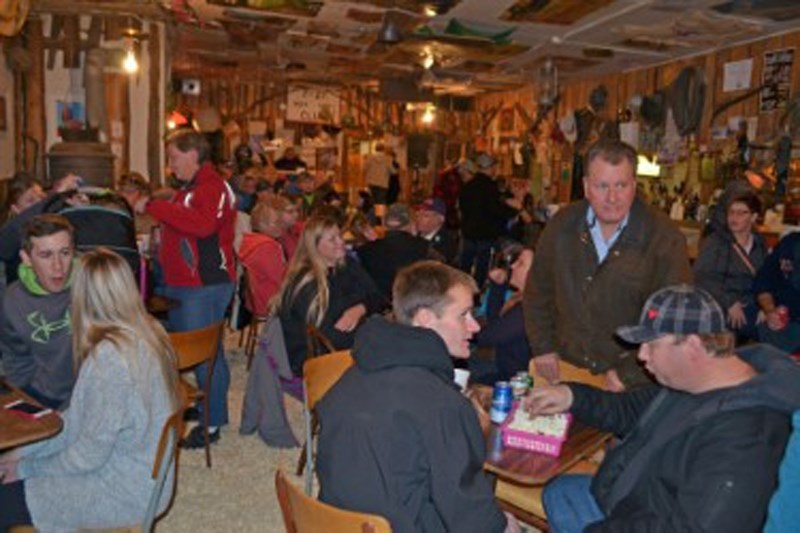 Pizza Night at Rowley&#8217;s Sam Saloon can attract up to 150 people in the town that has only eight permanent residents.

Whenever Rowley has faced oblivion from the ghosts locals have always come up with a plan, sometimes mischievous, to save their dusty locale on the Central Alberta prairie.

When the hamlet, located 38 kilometres north of Drumheller, was fading away in the mid-1970s, a group of men staged the famous break-and-enter party into Sam's boarded-up cafe, and symbolically stapled dollar bills to the ceiling to initiate a Save Rowley campaign.

Twenty years later, following a rebirth that included the town being used in 1988 for the filming of the Canadian movie Bye Bye Blues, the boys brainstormed once again.

Rowley was about to lose a private railway tourism operation that delivered thousands of tourists and their badly-needed dollars since 1990. But then came a different inspiration. It was pizza.

“I think the boys were looking for something to eat and somehow they ended up with a pizza crust. They made up a pizza and thought, ‘maybe we should start selling these things, eh?'” said local Doug Hampton, official caretaker of the hamlet, whose family has lived in the Rowley area for more than a century.

Two decades later the ghost town has had another rebirth. On the last Saturday night of every month, Rowley hosts Pizza Night, and up to 150 Rowley lovers from across the region and as far away as Calgary, pack Sam's, now lovingly restored into an old-fashioned saloon on Main Street.

“In the summertime we get more people than can fit in here,” said Leroy Avramento, the saloon's grizzled bartender for more than 15 years. “It's Rowleywood. It's history.”

By 5 p.m. on Oct. 29, the hooting and hollering had already started. It's two days before Halloween, and many are dressed for the special spooky occasion. The beer is flowing. Dancing has started. Thanks to the granting of a special licence, children are free to roam the saloon. Early arrivals order their pizzas, homemade creations prepared by volunteers in the nearby community hall.

“My heart is in Rowley. I want to see the little town stay alive,” said volunteer Shirley Bremer, who was born and raised in Rowley, adding the resilient ghost town offers an opportunity to “step back in time. You can't find this kind of socializing and atmosphere just anywhere. You come out here and it's special.”

Especially so for American Emily Overes, who moved permanently to Canada just over a year ago to be with husband Dan. They live in Cochrane and the couple has already attended three pizza nights.

“I just love the spirit of the community, no pun intended,” said Overes, who just secured a copy of Bye Bye Blues. “They love putting it on. The money goes to a great cause to keep the town looking good. I love to see the local folks dancing, having fun and just enjoying themselves.”

Most importantly for out-of-towners, Pizza Night in Rowley is a unique experience that can't be replicated anywhere else.

“It's a bit of an adventure,” said Calgarian Harry Brugmans, who discovered Rowley by accident five years ago while geocaching. “It's different, rustic. You don't have to put on any airs to come here, that is for sure.”

"I just love the spirit of the community, no pun intended. The money goes to a great cause to keep the town looking good. I love to see the local folks dancing, having fun and just enjoying themselves."

Penhold proudly salutes Class of COVID-19
Jun 2, 2020 5:00 PM
Comments
We welcome your feedback and encourage you to share your thoughts. We ask that you be respectful of others and their points of view, refrain from personal attacks and stay on topic. To learn about our commenting policies and how we moderate, please read our Community Guidelines.